The Land of Widows

Colombian artist Doris Salcedo’s retrospective is tucked away in the Guggenheim’s Tower Galleries, spread among the museum floors. The galleries are reached by way of narrow hallways which function like parentheses in the winding sentence that is the museum’s iconic spiral. 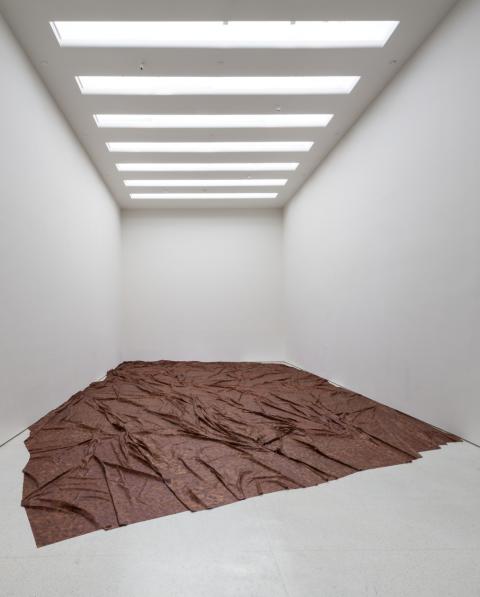 We start at the end. A Flor de Piel, the final work in the exhibition’s narrative, is a skin made from flowers. In Spanish, “flor” means flower and “piel” means skin, and this expression suggests strong emotions bubbling up from under the surface. In contrast with the beauty and poetry of the saying, the sculpture itself is disturbing – a bleeding, pornographic, flayed skin, whose folds take over the entire room, appears to be expanding. 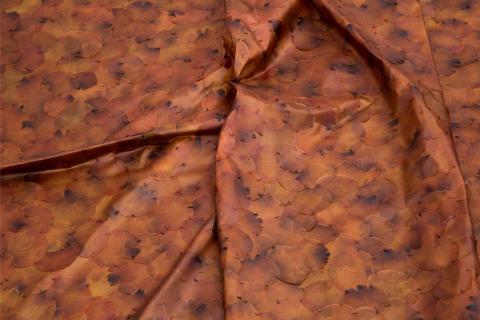 The piece is made from hundreds of thousands of rose petals, which Salcedo, along with an army of assistants, preserved in glycerin and collagen and sewn together with surgical thread. It is a symbolic shroud for a nurse who was tortured to death in some Colombian cellar for something she had done.

Some woman who had had some horrible thing done to her: this is the level of political, chronological, and demographic detail Salcedo provides in her works. While it may be self-explanatory to South Americans, viewers from other cultures need to learn an essential term in South America’s political and historical lexicon in order to explain this tactic. The word “desaparecidos” means: “people who have disappeared,” but in fact the meaning is more like “people who have been made to disappear”. Men, women, and children vanish one day, without a trace, and at best, their bodies are later found in mass graves. They are kidnapped, tortured, and murdered because their names showed up on some list which tied them to some subversive activities against the regime, the military, or a criminal organization. If this sounds like a too-general explanation, that is precisely because the reasons for the “disappearance” of these people are general and impersonal, and the consequent murder is systematic and anonymous.

Salcedo is the ultimate political artist, and her art almost always responds to a specific disaster, which has happened to specific people, in a specific place. However, the disasters she refers to have happened so many specific times, to so many specific people, in so many specific places, that if we tried to count the names and the dates we would get nowhere. And also, crucially for Salcedo, the traumatic event would remain “out there”, in a foreign country with foreign political problems, rather than here, in the world in which we live, where incomprehensible violence is a daily occurrence. One work in the exhibition that speaks directly to the desaparecidos is an installation called Atrabiliarios (a word even Salcedo has not been able to translate). In this work Salcedo entombs women’s shoes, which have been unearthed in mass graves, in the museum’s walls. They are placed in niches and sealed with semi-transparent membranes made from cow stomachs. The installation is reminiscent of Christian martyr niches in churches, but Salcedo’s niches come with no names, no dates, nor places listed. All we know is that these shoes belonged to a woman who liked black Mary Janes, and that pair was owned by a woman who was a size 8. 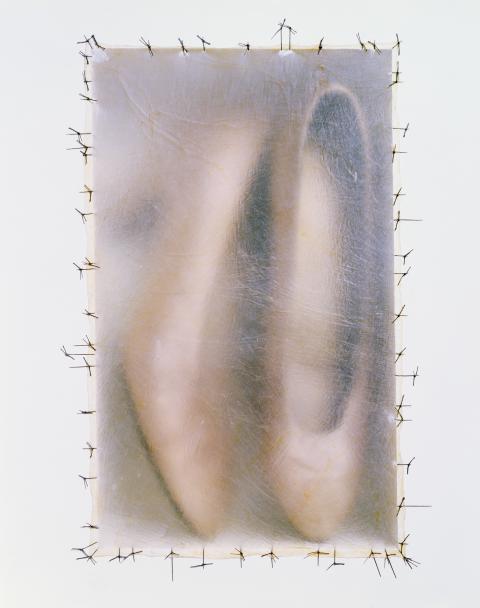 Doris Salcedo is known for addressing the collective trauma of totalitarian regimes: government-sponsored torture, war on guerrilla groups, and other political and social phenomena woven into the fabric of Colombia’s past and present. Although the Guggenheim exhibition is a retrospective, it is a partial one. Her huge public sculptures are conspicuously missing, being site-specific and far too large for the Guggenheim galleries. One of these works is Shibboleth, 2007, the 167-meter fissure Salcedo had carved into the floor of the Turbine Hall in London’s Tate Modern. Although long filled-in with cement, its scar is still visible in the museum’s floor today.

Salcedo’s exhibition at the Guggenheim settles for suggesting the unseen laceration, the violent action of war that happens outside the frame of the gallery. Salcedo interviewed victims of these narratives over long periods of time, and one of the most interesting examples of the work that resulted from these interviews is Disremembered, whose title is a wordplay meaning “those not remembered” but also sounds like “dismembered”.

The piece includes three delicate tunics, light and feminine, hung on the wall in a dimly-lit side gallery, a hallway really. At first glance they look like diaphanous designs by Issey Miyake. A closer look reveals the shirts to be made of raw silk threads, and among the strands are very thin black lines, tiny sticks which turn out to be charred sewing needles. The shirts are hidden torture instruments whose wearer would not be able to breathe without feeling pain. Salcedo made this piece as a reaction to the stories told to her by mothers whose sons were gang members and had died violent deaths – a population whose bereavement seems to the artist to not ‘count’ as much as other people’s, and which the artist describes as “a living death.” 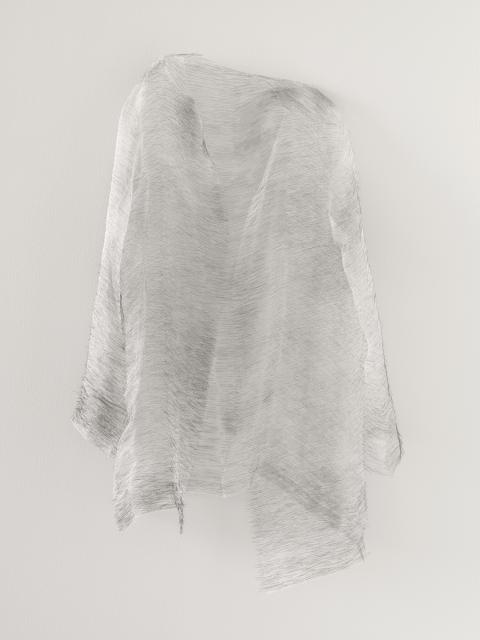 Nearby is one of Salcedo’s most known bodies of work, on which she has been working for over two decades. Titled La Casa Viuda (Widowed House), it is comprised of pieces of furniture Salcedo found and filled with concrete. In some cases she joined the pieces together to form hybrids that reflect a Freudian dream-logic, in which a bed might also be a cupboard and a house could be completely empty and jam-packed at the same time. The concrete used is a building material but it is also what graves are made of. It is the ultimate modernistic building material, but also an emblem of emptiness.

Salcedo says that Colombia, which she refers to as a country full of widows, has lost its ability to mourn, and in some ways to even to think about the suffering brought upon actual people as a consequence of major political events. The American artist and educator John Baldessari once said that the role of the artist is to point. And that is exactly what Salcedo does in her work: she points out what has happened and what is still happening in a country we are all used to hearing about in the news, and for a moment she places those specific nurses, widows, and mothers right in front of our eyes. 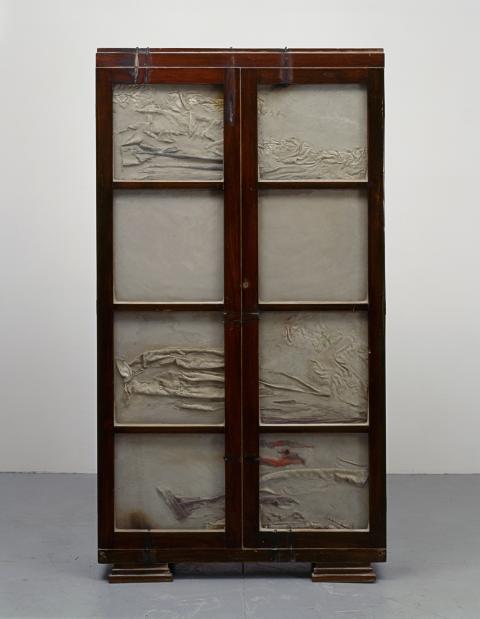 Doris Salcedo’s retrospective at the Guggenheim in New York will be on view through October 12th, 2015. 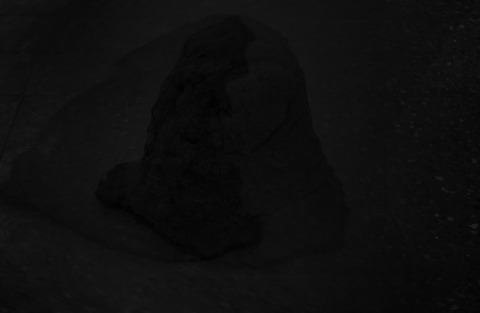