The Artist’s Gesture and Long Live the Messiah

How different can two painting exhibitions be? Danny Yahav Brown on shows by Amir Nave and Yitzhak Livneh at Sommer Contemporary Art.

Amir Nave’s show, “Introspection,” is presented now in the central space at Sommer Contemporary Art, in Tel Aviv. Differently from Maya Gold’s show, which I wrote about recently, and has been very tightly conceived and executed, with its beginning, middle, and end, Nave’s painting is somewhat unraveled conceptually, casually and nonchalantly executed.  This is by no means negative; I only seek to describe the obvious. And indeed, Keren Goldberg’s accompanying text talks about canvases being haphazardly stretched and about similar formalistic values that the content is based on: “ …their unraveling edges imply a process of decay,” “…minimal lines or contours can be seen, indicating movement.” 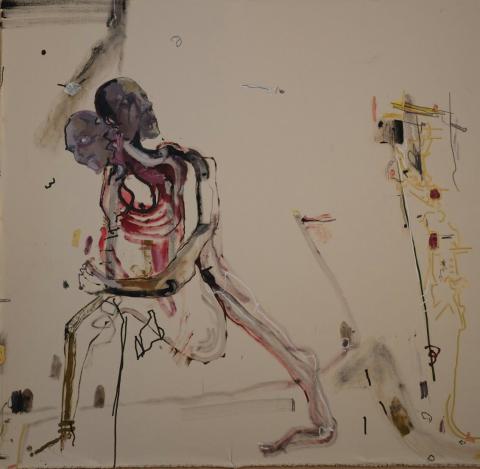 Amir Nave. Untitled (the day before today). Oil and graphite on canvas. 195.5X184.5 cm
2016. Courtesy of the artist and Sommer Contemporary Art gallery

Still, some organizing logic may be discovered in Nave’s paintings, like that of the “want of matter” concept, literally and in light of the thesis composed and curated by Sara Breitberg-Semel in 1986. I think of the whole range, from Raffi Lavie’s plywood and his scribbles and scratchings, through the collages of Henri Schlezniak and Yair Garbuz, and ending with Moshe Gershuni’s mud. Nave’s painting clings to the same poverty of material; perhaps not so much to the new Israeliness and the Tel Aviv-ness Breitberg-Semel is talking about, and rather to the material itself: the incidental ground - in Nave’s case it is paper and canvas – absorbs everything. The visibility of the ground, the apparent lack of care, is nothing if not crucial, since the loose edges may forever join and re-join. Or, conversely, might never be joined again.

But, and this is a game-changing but, the option to roughly sew the pieces of canvas together, the trim of the edges which barely reach but do not quite cover the frame, leaving it exposed - these are choices, even tactical choices: such that are motivated by the will to bring a process to its culmination (a strategy?). I find it hard to believe that the artist simply cuts the canvas so that it exactly does not suffice to cover the frame. Therefore I focus on the word 'choice', which indicates intention and is in direct contradiction to nonchalance. This explains, to some extent, the prospective head-scratching while looking at Nave’s paintings. The questions I’ve asked myself were, “where does this lead? And why is this interesting?” 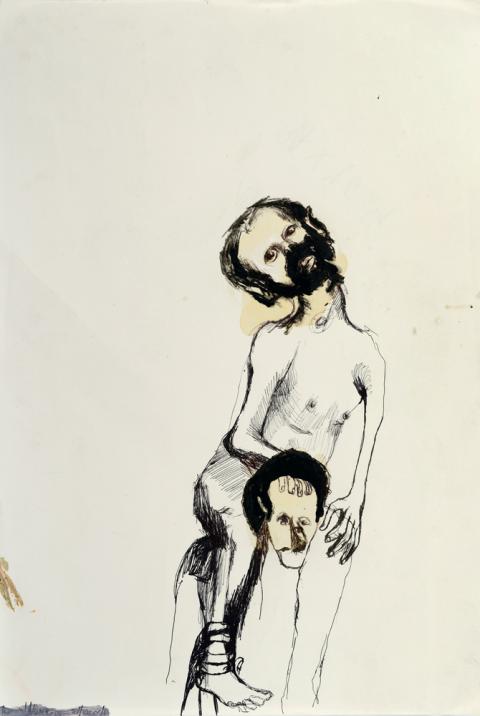 The answers to these questions are not straightforward. Nave’s paintings do not produce the type of syntax that seeks strategic meanings or deduces any conscious understanding. This might prove disappointing to anyone who arrives with certain expectations, and very pleasant for those who come with different ones, or with no expectations at all. Thus Nave’s painting exists in a twilight zone of nonchalant beauty. Again, that word… This kind of painting exalts in virtuosity, which originates in a very specific toolbox. The virtuosity in Nave’s painting is brilliant. It showcases the motion of the artist’s hand, the sensitivity to color, the perfect understanding of composition, and the ability to switch from a panoramic, generous composition to one that is tight, overloaded, dense, and so on. This list of values tends to pull together various emotions, which rarely have anything to do with what is actually in the painting: violence in relation to density, sexuality, which might appear with that density, and so on – fear of death, which might come with almost anything: loneliness, existential despair, the decline of the human body, castration… Nave’s painting reflects all of the above.

Nave is also a gifted draughtsman, and he is well aware of its danger, of the great guilt adjacent to the ability to represent the world (Uri Lifschitz is perhaps the best example of incredible draughtsmanship, which has received no appreciation from the artistic establishment and from the cognoscenti. Of course, Lifschitz has done very well for himself outside the establishment, but he never stopped holding a grudge against it.) The drawings, especially the works on paper, wallow within themselves, nearly fading away, disappearing in one unsteady line into the whiteness of the paper. I’m using formalistic terms to describe a situation which might (might? No, would certainly!) produce an insight.

Nave’s painting is simply beautiful. Its nonchalance is absolutely exacting. The ability to understand painterly values which address and point to emotion, and to speak through them, is substantial. Nave’s painting maximizes these values. For better or worse, he goes for the widest possible common denominator – anyone would find something to identify with in these painted moments. Goldberg writes: “These scenes themselves are a bit more playful. Or social. One of the paintings is even titled Brothers.” And I’m thinking, after the initial enjoyment of these painterly moments, that I would like to know more, about these brothers for example. And I know nothing. Nave’s painting, in this sense, is its own sum total. Beautiful, because it is, and moving, because it is. This tautology, in all its cleverness, has left me unsatisfied.

In the gallery’s project room Yitzhak Livneh presents his show “Honest Disclosure.” How dissimilar can two shows be? Livneh’s painting is very different from that of Amir Nave. It is different in every aspect, except for the fact that both shows belong to the same medium – painting. Livneh’s show is nothing less than a paragon of painting in a spectacular show. The paintings and the hanging complement each other, explain each other’s rationale, and support each other. Goldberg has written the accompanying text here as well. An excellent, succinct text which encompasses the quintessence of the works and Livneh’s consciousness as it is reflected through them. 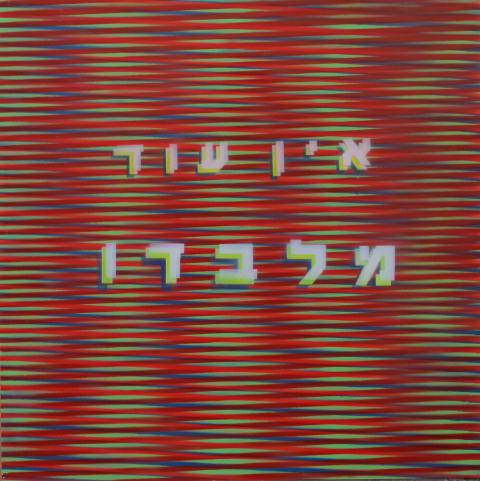 Yitzhak Livneh. There is no other. Mixed media. 60X60 cm
2015. Courtesy of the artist and Sommer Contemporary Art gallery

Livneh’s work has come a long way since I last saw it. Has it been in a retrospective at the Tel Aviv Museum? His main theme is the encoding of each painterly gesture within an ostensibly technical painting. All the works, bar none, are of the same size and square shape and seem to have been painted by some mechanical/technological tool. This, of course, is not the case, since they’re all hand-painted. The colors change, as does the technique (oils, spray paint on Formica) and the background, which is also a painting. This is an internal conversation which never stops and avoids overflowing into didactic statements or into self-congratulation. Livneh quotes Gabriel Klasmer and perhaps some others, innocently and within a convincing inner dialog; we, the viewers, are given an opportunity to be the proverbial fly on the wall and listen in. This is wonderful and not to be taken lightly. 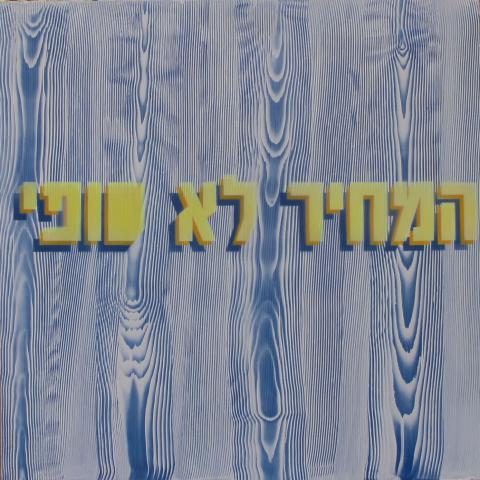 Yitzhak Livneh. The price is not final. Mixed media. 60X60 cm
2016. Courtesy of the artist and Sommer Contemporary Art gallery

The content also varies among the paintings. Some contain short phrases which, in Goldberg’s words, turn them into “posters or signs, while the patterns function as background.” The phrases are extracted from the realms of real estate (“A-m-a-z-i-n-g studio apt.”), sex ads (“Waiting for you”), religious slogans (“Long live the Messiah”), and others. Some of the works toy with the false depth of a painting and introduce questions of shallowness, depth, and illusion. But, indeed, these questions are not foreign to the subject matter: the Messiah as an illusion, depth and the female sex organ are currency for those who are “waiting for you.” Flatness? Just choose. Livneh cleverly weaves content and form and fuses them into what appears to be an absolute truth, which would fall apart and be forgotten as soon as we turn our attention to the nearby painting (or advertisement),  or the one across the room. 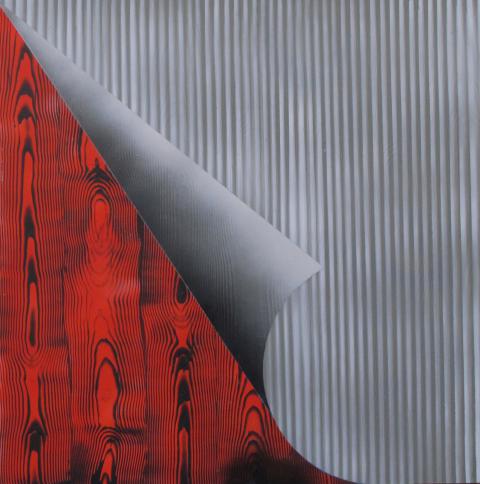 One motif is repeated in several works: analog clocks. “Wall clocks,” as Goldberg calls them. They add another dimension to the works (not that they lacked any). The addition is welcome but disturbing. Livneh’s clocks remind me of the one that used to tick away on the black screen of Israel’s first and single TV channel, in the 1960s, as a sort of intro to the news program, or the children’s hour, or the beginning of Arabic programming. The clock is a clock is a clock, of course, a signifier of time with its multiple meanings – motion, order, life and death, and so on. In Livneh’s paintings, any one of these interpretations of the concept of time is acceptable and valid, but I think I prefer the one of the intro from Israeli TV: a space separating different times – the start of a program everyone is waiting for; time that points to its own existence; signifier and signified as one. The clocks are emptied of content and only “tell the time.” This is time which reverts to an incomprehensible point of non-interpretive quintessence, adding a slippery layer to the many already existing in Livneh's paintings. This is brilliant. Again. Go see it before it closes.

Amir Naveh’s and Yitzhak Livneh’s shows will be on display at the Sommer gallery through March 19th, 2016. 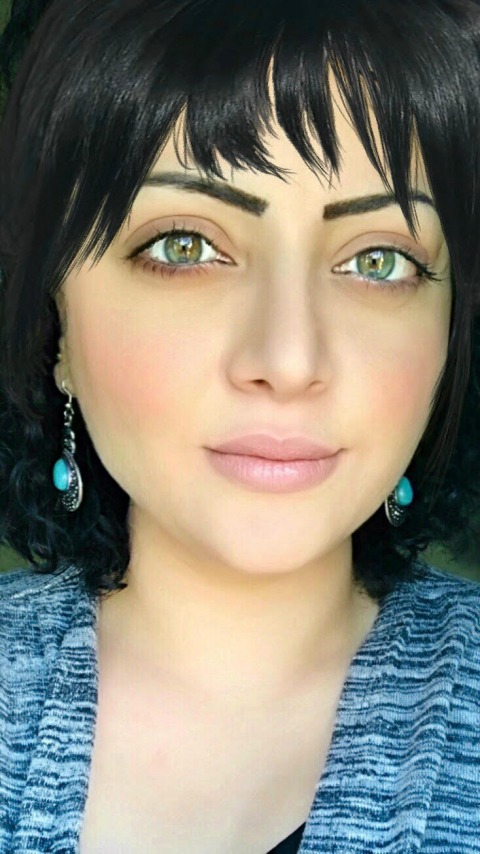 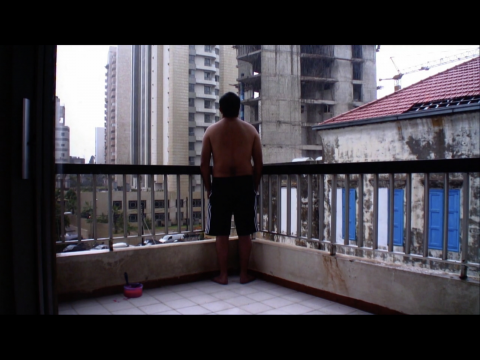 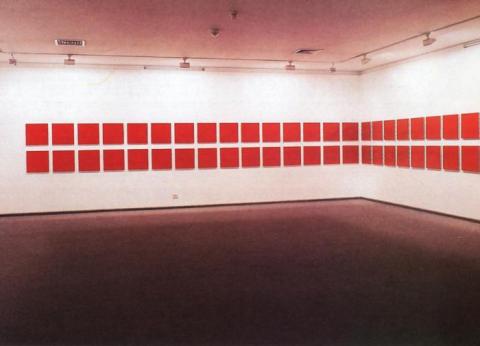