Ammar al-Beik’s film The Sun’s Incubator offers a destabilizing, non-linear view of the Arab revolutions from a domestic setting. Margherita Foresti analyses the film’s complex temporality, manifested mainly through the motif of the TV screen.

Ammar al-Beik’s (b. 1972, Damascus) film The Sun’s Incubator1 begins with a long shot fixed on a man standing on a balcony with his back to the camera. The man is filmmaker Ammar al-Beik himself, seen staring at a bleak urban landscape, with its anonymous edifices being washed by the rain. The camera indulges this vision for a while, giving the feeling that time is standing still. This is an immobile shot of a man in the act of seeing, yet the sound of the rain reminds us that time is not immobile but, rather, is passing. It is not a depiction of movement, neither of the character nor of the camera itself, nor is it the kind of movement obtained through a montage of shots. Within the frame is a sort of human still life, a long, fixed shot which almost deceives the viewers into thinking we are staring at a photograph. Yet the sound of the rain is there to remind us that time is moving forward. To put it in Deleuzian terms: what we see in this first scene is a time-image rather than an image of movement. Writing about Italian Neo-realist cinema, abound with long sequence-shots displaying everyday life in its most banal and superfluous details, Deleuze distinguishes between images in which movement is added through montage and time-images, in which movement is already in the image.2 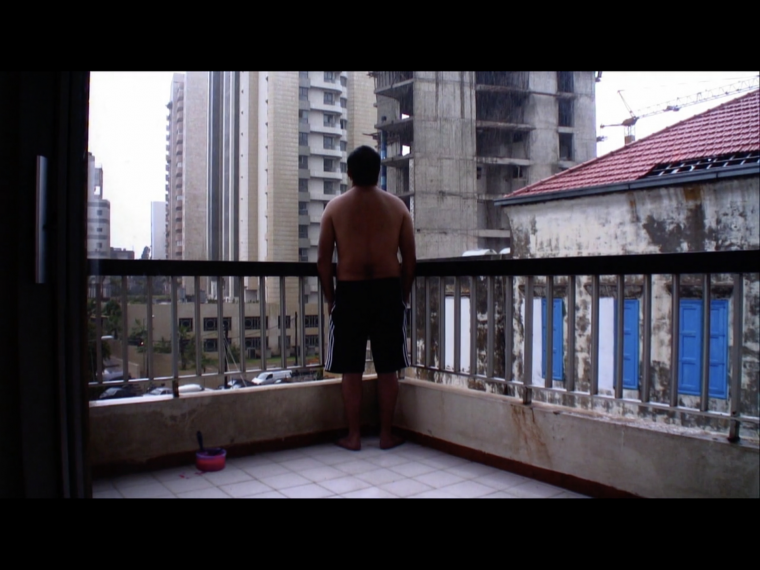 Al-Beik’s 2011 film follows the evolution of the Egyptian uprising and its effect on the Syrian revolt of that year through a domestic, private perspective. The next scene is a close-up of a sink seen from an oblique angle. The hands of a man appear in the frame of the camera, in the act of washing out red paint. As the paint begins to spread over the sink, we hear a TV news broadcast about ongoing demonstrations in Cairo, against the government of President Mubarak. The information given by the reporter immediately situates the scene in an exact moment in time: the beginning of the “Arab Awakening” in 2011. The subject of vision in this shot is the color red; the subject of sound is the news report in the background. Once again, there is hardly any movement in the scene, but rather the movement is in the image. The beginning of this long shot of pure vision and sound suggests different interpretations. We might not immediately realize that what the hands are washing out is paint, not until the hands disappear briefly and return to bring into the scene two brushes from which they rinse out the paint. At first glance, the color red and the reports on demonstrations in Cairo suggest the possibility of a different interpretation, where red is associated with blood, and the real-time news with recent sparks of violence. Two meanings follow each other or rather coexist within the viewer’s acts of seeing and hearing. Two possible readings symbolized through the image of paint and that of blood: a peaceful protest versus a bloody one. Driven by the need to find out the truth of the story we are left with a falsifying narration. As Deleuze describes it: there is not a single line of interpretation, but rather multiple ones that coexist within the time of the shot. A narration is falsifying when it stops giving the impression that we are facing one truth only and that, on the contrary, there is a range of potential truths or even simultaneously existing truths, in the plural. Our quest for a single answer is denied. Cinema reveals to us our “powerlessness to think”.3

The next shot brings the viewer to the source of the news broadcast. A TV screen stands to the left of a cradle, and both are frontal to the camera. Live images of protesters from Cairo are featured, while a single voice delivers a slogan for the crowds to repeat (“Let’s change the constitution”, “Down, down Hosni Mubarak!”...).4 To the right of the TV, a mother changes a baby’s diaper and dresses her. She keeps on with her daily routine oblivious to the images and sounds or ignoring them, suggesting that they have become, through the TV, just another presence. The abundance and reiteration of images of protests result in the indifference of those who live next to their broadcast images.

In the following scene, the camera faces the TV screen again, which is now turned off, although we can still hear the same loud, chanting voices of the protesters in Cairo. To the left of the TV, the woman appears from a dark corridor and starts looking for her jacket in a wardrobe. This is another time-image: while classic montage would have either represented the act of getting dressed by combining a sequence of shots to allude to it symbolically, or even cut the scene out, considering it superfluous, a cinema made of time-images aims at exactly these apparently irrelevant and superfluous moments. Al-Beik’s camera is kept frontal and still, becoming a sort of witness to everyday gestures. While looking for her jacket, the woman even disappears behind the wardrobe door, so that we see nothing but an improvised cardboard demonstration poster, which hangs on the doorknob, reading: ‘dégage libérté pour l’Égypt’ [get lost, freedom for Egypt]’.5 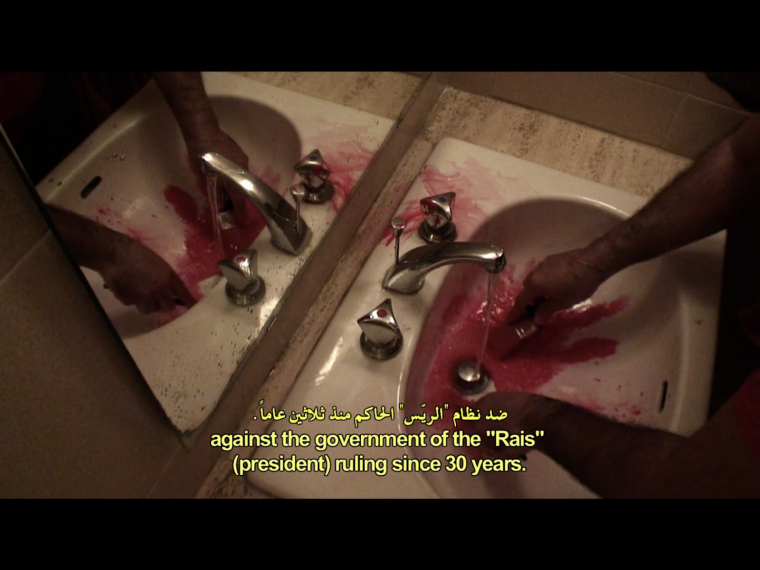 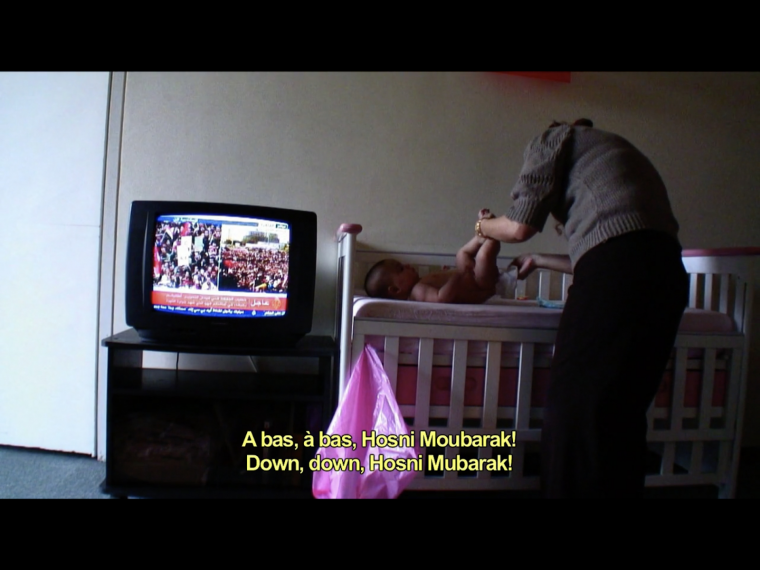 Something else, apparently unimportant, happens in this scene. The TV has been turned off but we can still hear the protesters’ voices. While previous shots seemed to suggest Egypt as a distant reality made present only through its mediatic representation, the viewer now wonders if the protesters had not been on the street right outside all this time. What the viewer assumed to be true becomes uncertain. The narration is falsifying, destabilizing.

Deleuze writes that all cinema is de-territorializing, since “the screen, as the frame of frame, gives a common standard of measurement to things which do not have one […]”.6 However, de-territorialization in this scene of al-Beik’s film does not just concern the way objects occupy space. The question, even more radically, is: what space and time do they occupy at all? The answer surely cannot be univocal. There is no doubt that the film is set during the time of the Arab revolutions. However, the logical temporal succession of events within the film vacillates. Events are not structured along a linear chronology. Instead, the narration moves back and forth from one moment to the next. Different times flow into these scenes: first there is the moment of the actual present, that which the camera captures; there is the moment of the preparation for the protest, in which the two characters of al-Beik’s film are in a state of waiting, already projected into the near future; lastly, the sound of the protesters coming from the TV echoes a recent past. Actual present, almost-future, and already-past. 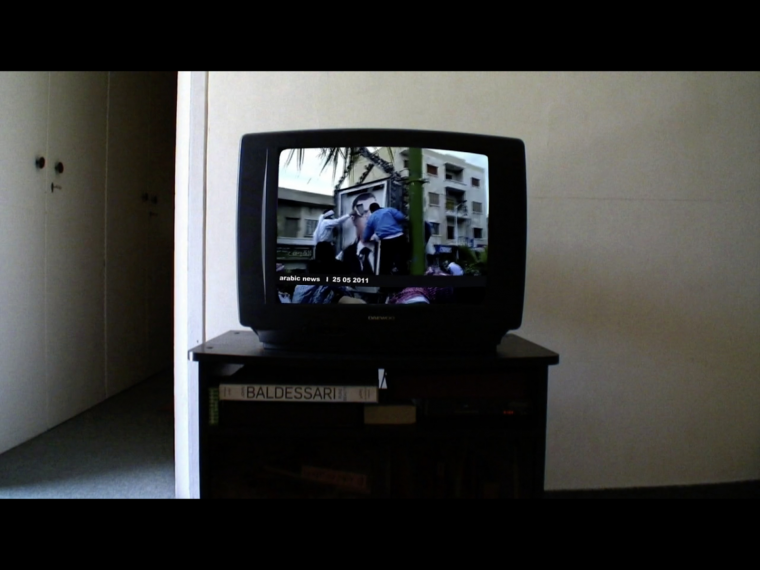 In fact, The Sun’s Incubator is Bergsonian throughout. It is a film about time, about a present that is ungraspable, already unfolding the future, after which it is already past.7 Bergson’s understanding of time as a coexistence, rather than as a succession of moments, is at the heart of Deleuze’s vision of cinema. I argue that al-Beik’s film symbolically represents this coexistence through the motif of the TV screen. All the images in the film share one thing in common: the TV screen as a catalytic device directing the flow of time. It is in fact through a screen that the present flows into the past, and vice versa: that the past is made present again, actualized and recollected.

The broadcasting TV works as a reification of Bergson’s understanding of memory. The act of recollecting a memory is famously described by Bergson through the image of an inverted cone, in which the point represents an individual experience and the tangent - the actual present. Together, they stand for the experience of the immediate present. From the extremity of the cone, all experiences flow into the volume, occupying one of its sections, that is one region of the past, to become pure memories. To remember is to virtually locate oneself in a region of the past, select an event and bring it to the surface, to the actual present. For Bergson, memories acquire the state of images only when they are actually remembered. On the other hand, pure memories, memories that have not yet been remembered, are virtual, opaque images which exist independently from the new present in which they can be made sharp again, that is remembered.8 In al-Beik’s film, the immediate present flows through the TV screen into the past and backward: the TV screen shows images of the past, bringing them to the present time of the film. The past materializes in the shape of images and therefore, the film delivers to us memories. 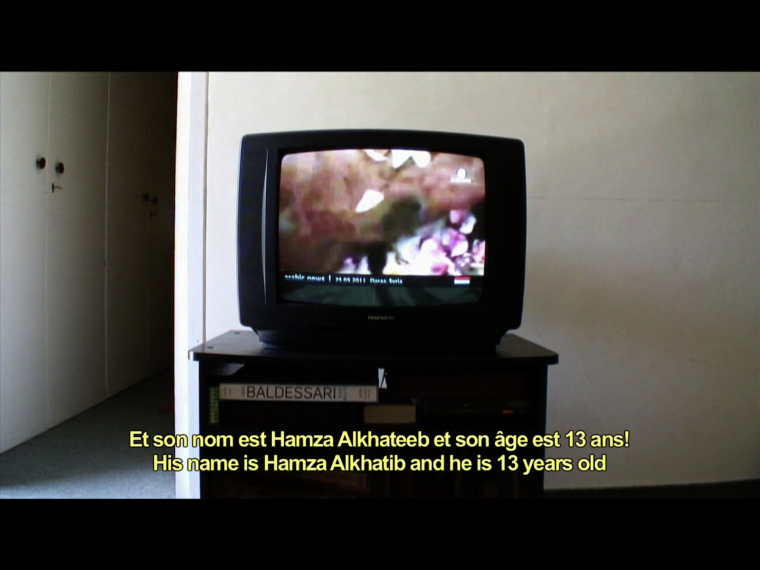 Acting as a metaphor of Bergsonian time, the TV screen shows the passage from the virtual to the actual and vice versa. The moment that the present passes through the screen it is already past. For the time they hold on there, events are in that state of virtuality, neither past nor present, nor recollection, yet potentially all three. At times, the characters of the film seem to pay no attention whatsoever to the screen. Still, images keep flowing at an undisturbed pace, like pure memories:9 the characters are unaware of them in most of the scenes. Such on-screen memories, thus, are independent of the individual’s conscience.

Time as the coexistence of temporalities discloses a different way of looking at history. One in which space and time are treated as open categories generating multiple perspectives on facts. This is what The Sun’s Incubator pursues. It is a film whose narrative avoids giving univocal answers to the viewers. For Deleuze, falsifying means the opposite of a self-affirmation of truthfulness: cinema never offers us a truth, yet it is not lying. The cinema of the time-image leaves us wondering about what to believe. What is the truth of the Arab revolutions? A film claiming to give an answer to this question would be misleading. If history never holds one single truth, then so does cinema. 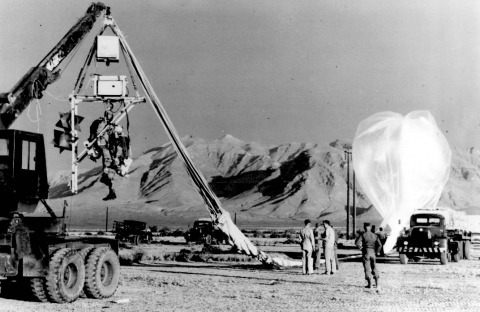 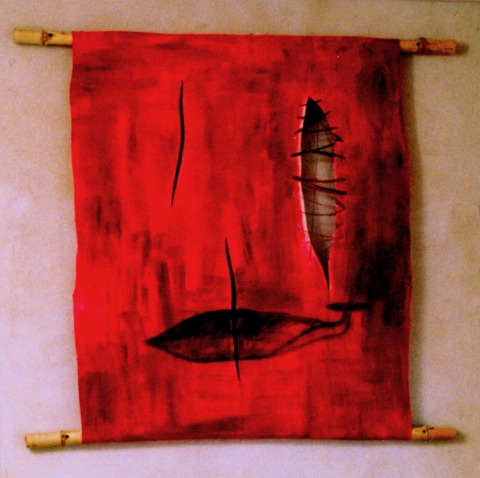 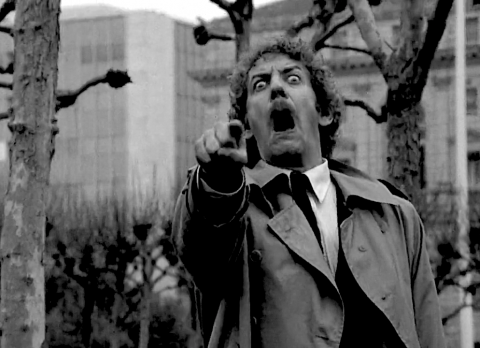