Launching the first scroll of the Travels of Schneur Zalman Mendelovitch, by David Duvshani and Shahar Feinberg, published by Tohu Magazine and Barhash.

We are happy to announce the launch of the first printed scroll in the series the Travels of Schneur Zalman Mendelovitch (S.Z.M.), by David Duvshani and Shahar Fineberg, a cooperation between Tohu Magazine and Barhash Publishing. The launch event will include a theatrical presentation of the story of the scroll, live music, and a D.J.

The Travels of S.Z.M. is a comic strip in the form of a scroll, which has been published serially in Tohu Magazine since December 2016. The story follows the imaginary adventures of the rabbi Schneur Zalman Mendelovitch, a member of HABAD, an illustrator, and a miniaturist, who lived in Hebron in the middle of the 19th century and traveled all over the world. From chapter to chapter in the strip, the character of S.Z.M. wanders through places and times around the world, from India at the time of the Great Revolt to Acre under Napoleon's siege and to Victorian London 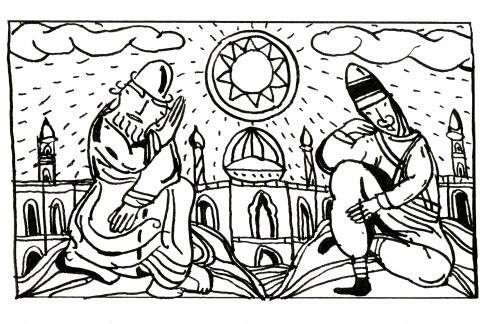 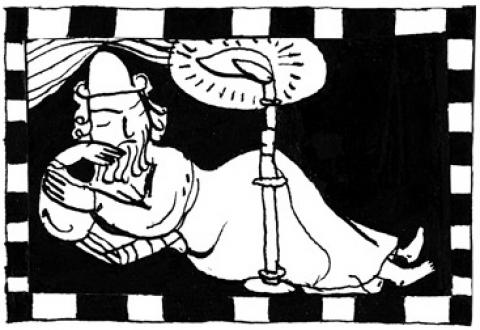 Read all the chapters

A limited first edition of 50 copies of the scroll will be available at a special price during the event.

David Duvshani is a Tel Aviv-born artist; he is a graduate of the Beaux Arts School in Paris.
Shahar Fineberg is a playwright, linguist, and translator. Born in Jerusalem, he lives and works in Paris.

Barhash is a small, buzzing independent publisher. It was founded in 2016 as a not-for-profit organization, out of the desire to disseminate new great writing, and in particular Israeli poetry.

Sonic Clonic is a dark-cabaret psychedelic band that fuses music, performance, and Cipralex.