Everyone has a Dreamland. Dreamlands: Immersive Cinema and Art, 1905-2016, at the Whitney Museum of American Art, curated by Chrissie Iles, moves towards an understanding of the experience of dreams by correlating it to that of the moving image, exploring the dream-like connotations of cinematic space, which screens the image instead of dreaming it.

"Dreamlands" finds its origin in H.P. Lovecraft’s Dream Cycle, a series of stories connected by a common conceit: they all involve entering an alternative place through a dream. The exhibition’s space is similarly organized as a series of immersive dreamlands, connecting different historical moments of cinematic experimentation. A single page - printed map is available at the entrance as a navigational aid to the chaotic exhibition.

The show fits 38 artworks on one floor of the museum. Most of the pieces are technologically complicated projects that make use of 3D effects, as in Trisha Baga’s Flatlands (2010). The spectator is required to wear 3D glasses and is invited to explore the boundary between the artist’s interior perception of the world and its appearance to others. The images, projected onto a triangular screen, look like placards. The 18-minute-long video has been edited to produce short sequences that flick by quickly. Each shot contains elements from the artist’s environment and her personal experiences. For example, she captures the experience of heavily falling snow with her camera pointed up to the sky. The work hovers over the line between real and illusionistic space, playing with light effects and enveloping us within both at the same time. 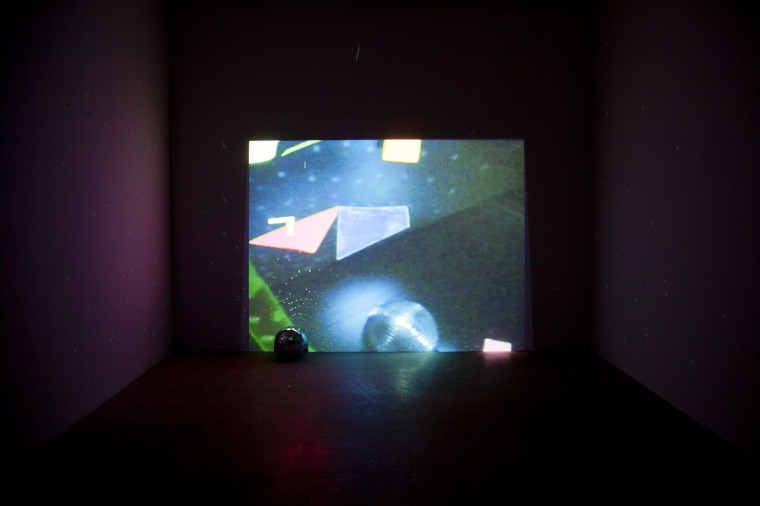 The exhibition also includes artworks that employ interactive, hands-on, digital technologies. For example, the work DiNA (2004-06) by Lynn Hershman Leeson, which consists of custom-designed software with voice-recognition technology, speech synthesis, and proximity sensors. The audience is asked to interact with a character on a screen by recording questions about world events through a small microphone. The female cyborg, endowed with artificial intelligence, answers the questions in real time by searching the internet.

Besides these engaging artworks, Disney Studios artists’ hand-painted sketches for the film Fantasia (1940) distill the whole idea of the exhibition. This animated film was produced by Walt Disney and directed by Joe Grant and Dick Huemer. The movie, which works on the imagination, produces a synesthetic-like experience through classical music, conducted by Leopold Stokowski and performed by the Philadelphia Orchestra. The caption next to the sketches notes that throughout the exhibition there will be only two screenings of the movie at the museum’s theatre. 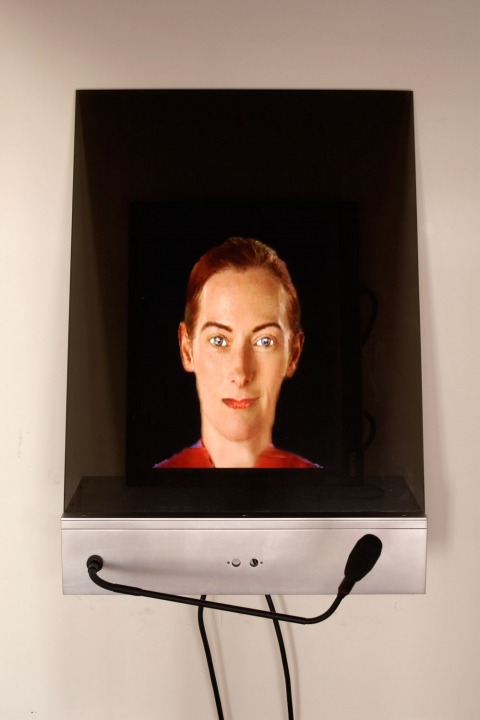 One is immediately impressed by the sheer enormity of the spectacle that is the exhibition. Simultaneously enticing, the artworks are spread widely in a formation akin to a labyrinth. As the main goal of the exhibition is seemingly to act as an immersive experiment, every artwork in the exhibition needs attention and complete commitment of one’s senses and body. It is impossible for the brain to comprehend all 38 installations together.

Though the sensory bombardment can be dizzying, there are clear standouts that demand a single-minded focus. Oskar Fischinger’s Raumlichtkunst (Space Light Art) (1926/2012), a 35mm film recently transferred to high-definition video, is projected across three screens in a non-narrative composition of color, light, music, and movement. Various animation techniques - hypnotic spirals, abstract patterns created using colored oils, three-dimensional objects, and wax - coalesce with images from commercial advertisements from the early days of the German film industry. As a non-narrative composition, the cheerful colors, upbeat light, loud mercurial music, and constant movement fascinates and hypnotizes. This piece is an adrenaline-charged hallucination of abstraction and metaphor. It is astonishing that this kind of work represents one of the earliest attempts at creating an immersive cinematic environment, something which later, in the 1960s, would become very popular. 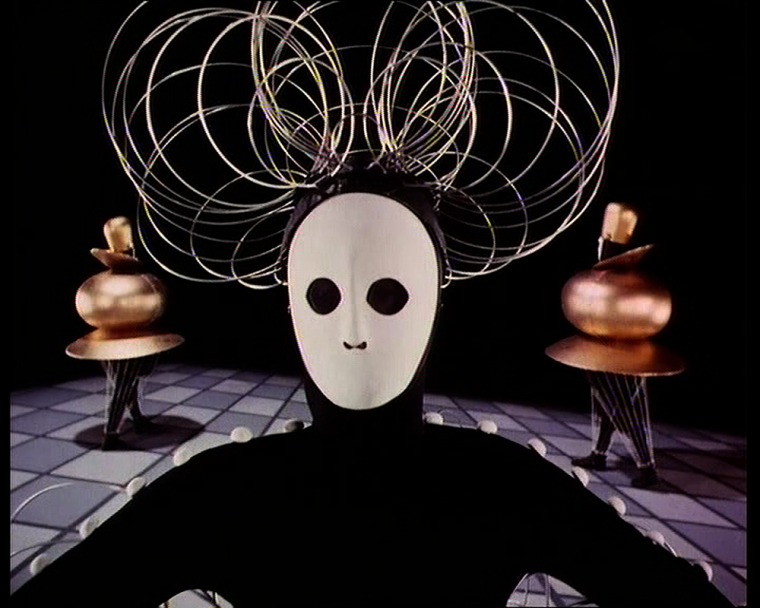 The same sense of the spectacle affects the viewer when in the presence of Movie Mural (1968) by Stan VanDerBeek, whose name is legend in the history of experimental film. The mural is constructed from about 10 projectors and slide machines. The projections were originally filmed in 35mm and 16mm, and later transferred to video. The old carousel slide projectors are set up on tables that make them feel authentic, bringing the viewer back to late 1960s. And yet it is an immersive and mesmerizing cinematic experience, like a colossal delusion. The projectors simultaneously screen multiple shots of the artist’s experimental films and drawings, collaged with footage from documentary movies, newspaper headlines, and images of the KKK movement, Martin Luther King Jr., and Adolf Hitler, and interspersed with abstractions such as spider webs, ancient symbols, and sculptures. This intense installation also includes photographic slides, fractured black-and-white and color images, Hollywood film clips, along with kaleidoscopic music and, sometimes, silent pauses. When the sound is played it overpowers all other installations in the space. 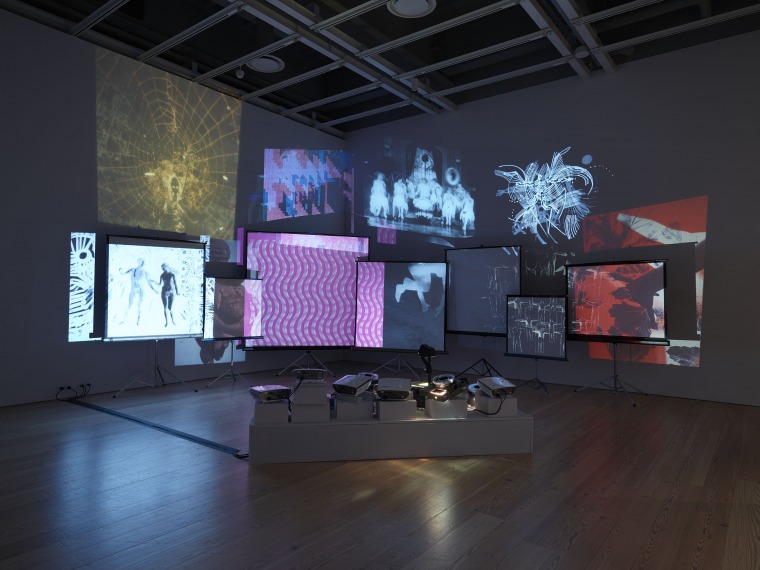 Two other installations, equally remarkable, are Ben Coonley’s Trading Futures (2016) and Hito Steyerl’s Factory of the Sun (2015). To experience Coonley’s installation one enters a large cardboard geodesic dome. The viewers sit inside, comfortably gazing upward onto the walls, wearing special glasses and watching a 360-degree video transitioning between 2D and 3D. It feels like dreaming. The installation blurs the boundaries between the actual and the virtual: in this case, the borders of the dome and the boundless visual experience that they encase. In the video, Coonley delivers a lecture on trading financial futures and the technical properties of 3D, mimicking typical educational videos. He moves through sequences, exploring spaces, and the point-of-view of the camera. He seemingly plays with gravity and movement through space with various optical technologies. The image seems to float as he films himself jogging, dancing, and taking pictures with his cell phone. Also included are animated figures collaged with figures of real people, as well as stereoscopic 3D video footage of his cat at night. It is like the experience of being in a planetarium, albeit touched by the banality of throwaway home videos. The installation compels the body to interact with the camera; the videos merge with the viewers’ experience: we are like children exploring the wonders of life. 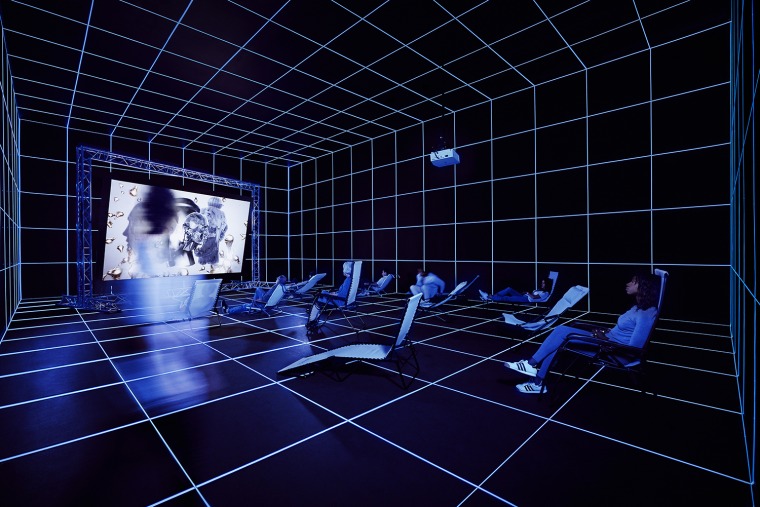 The curators may have taken a misstep when they chose to highlight Factory of the Sun (2015) by Hito Steyerl. The setting is extraordinary: the installation space is a fixed, three-dimensional, bold blue grid that is modeled to record and translate body movements into computer-generated imagery. An enormous screen occupies a third of the space and a few reclining beach chairs are scattered about. So far it is impressive. The problem with this installation is the video projected on the screen. This video tells the story of workers in a motion-capture studio, who are forced to dance in order to generate artificial sunlight. It is a video, but it is styled as a video game and creates a world that is a blend of the real and the virtual. It shifts between personal narratives and footage of newscasts of demonstrations; and moves playfully and critically between different levels of reality like a video game. At one point the narrator and ostensible programmer says: “this is not a game, this is reality.”

Indeed, the installation toys with the viewer and exposes the pleasure in leisurely watching violent content. And yet, somehow the space and the video are overly hi-tech in a way that makes the spectacle more important than the content, so that instead of critiquing the way the internet is used for surveillance and economic exploitation it seems that the work is destined to impress contemporary adolescents with its gadgetry.

The exhibition leaves one with a sense of confusion. The installations medled with each other. The process of exploring all 38 artworks in the exhibition, trying to understand the content of each, leads one to question the value of fascination, especially when it begins to veer towards sensory overload. Indeed, less is sometimes more. 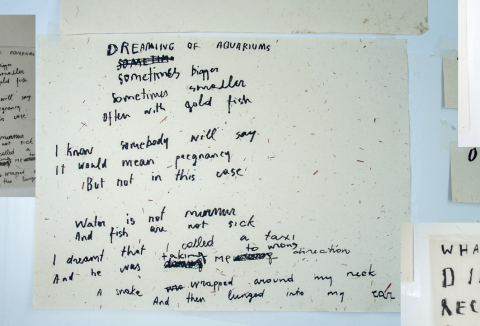 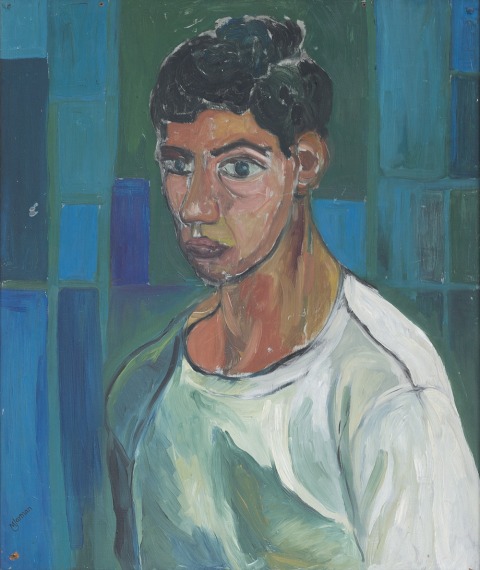