Bar Yerushalmi visits the exhibition of the artists' collective Slavs and Tatars at the Contemporary Art Centre in Vilnius and joins them on a magic carpet ride through the demographic, linguistic, religious, and social realms of the kingdom of Eurasia.

In the center of the town of Aksehir, in Turkey, a strange-looking bronze sculpture rests on a pedestal: a turbaned man, riding backward on a donkey. It is Molla Nasreddin, A.K.A. Joha, the legendary 13th-century Sufi sage. Dozens of folk stories and wise reflections are based on his character, as well as quite a few jokes and pranks. The figure of Nasreddin weaves colorfully through the Muslim and Slavic history of Eastern Europe and Central Asia. It is an image of the sage as he charges toward the future while his body is turned to the knowledge of the past. Like Janus, the god with the two faces, or Walter Benjamin's Angel of History, Nasreddin has become a part of the collective mythology: a being beyond time, capable of seeing the complexity of existence and the merging of various narratives, or perhaps a fool, mocking the existing order and offering an alternative philosophy through jokes and pranks. 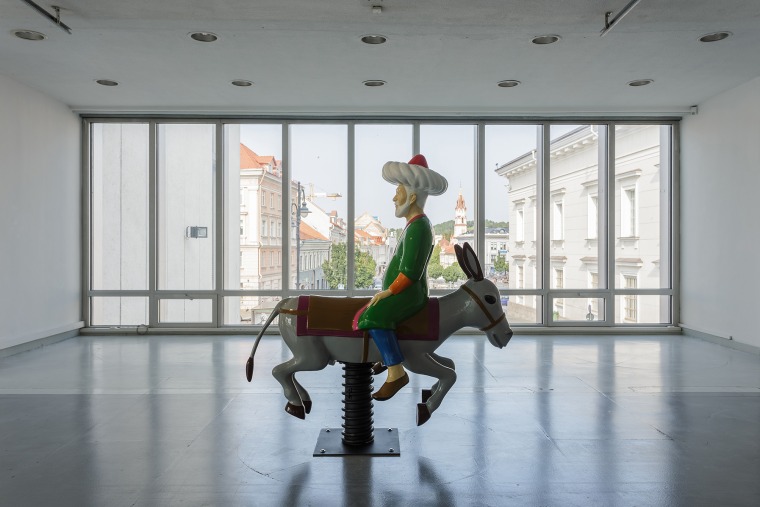 In one of the many stories told about Nasreddin, his acolytes, when they saw him in the streets, asked him why he was riding his donkey backward. Nasreddin answered, "The animal and I wish to go in different directions, so you might say this is our compromise." The concept of compromise is the thread that connects the works of Slavs and Tatars, the artists' collective whose extensive exhibition was recently on view at the Contemporary Art Center (CAC) in Vilnius, the capital of Lithuania. The collective’s work focuses on cultural and socio-economic areas of duality between East and West, and on the mix thereof. Nasreddin is an anti-superhero who shows up in quite a few of the works in the show, as a magic talisman welcoming the visitors, or as a wise guide leading them through the hallways of multi-dimensional time.

The collective started out in 2006, as an esoteric reading group with a taste for rare magazines about linguistics and anthropology. It quickly grew and gathered in a wide-ranging membership that included curators, academics, and artists from around the world, all of whom function as the collective's mouth and arms in its various enterprises. In their website, they define their actions as "an archeology of daily life” and themselves as “a faction of polemics and intimacies devoted to an area east of the former Berlin Wall and west of the Great Wall of China known as Eurasia”. The exhibition "Mouth to Mouth", curated by Monika Lipšic, focuses those encounter zones in one organic area: the mouth. It divided up the mouth cavity into its various functions and denoted it as a political and cultural instrument for transmitting traditions and oral histories, one where options of expressing identities or suppressing them are examined. Folktales and phonetic jokes are transmitted as a thick brew, from mouth to mouth (as the title implies), in the act of cultural resuscitation. 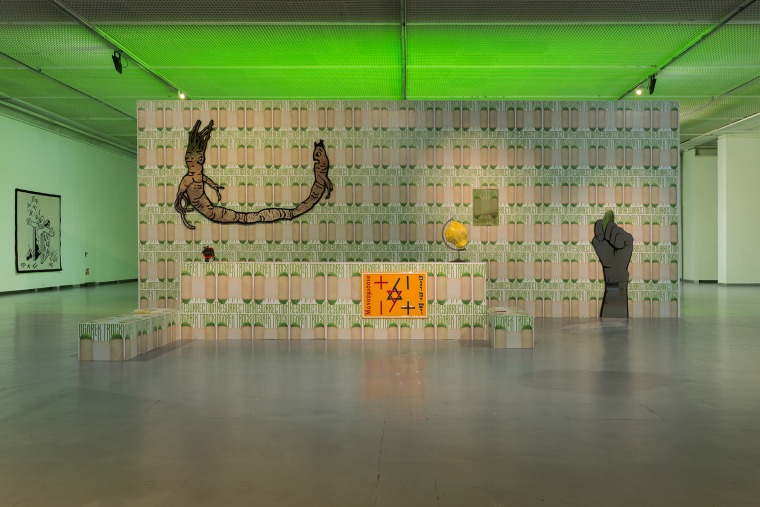 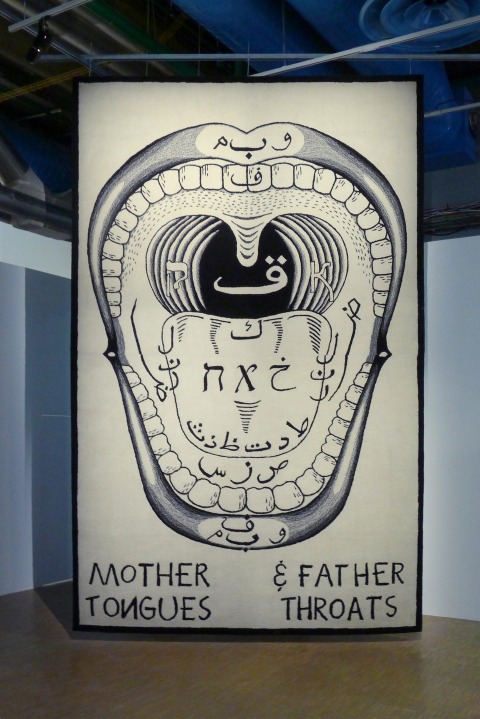 The work Mother Tongues and Father Throats from 2013 is a tapestry displaying a diagram of the Arabic alphabet, crossing the letters with regions of the mouth used to pronounce them. The artists investigate the political aspects of the mouth, its functions, and its ability to perform acts of connecting, manipulation, subtraction, and addition. They create a parallel between the Hebrew and Cyrillic alphabets through the guttural phonemes1 [gh] and [kh]. Thus they draw attention to the linguistic connections between Abrahamic cultures related demographically and historically through the throat region. The [kh], for them, is not just a vocal syllable, but a literal examination of the throat as a space of phonetic and sacred agency via Hebrew, Russian, and Arabic letters, where mystical traditions of Kabalistic Gematria, the Arabic Abjad, or Russian Futurism meet2. The throat, they imply, is the region where prayer is produced: a space of religious heterogeneity where hundreds of years of ideological separateness might be bridged.

The word play between 'mother tongue' and 'father throat' raises another point regarding the gender and genealogical contexts of language, and the way these are articulated in the education of our pharynx muscles. The mouth, they imply, is the arena where human communities meet physically, a site for remembering and perpetuating our ancestral mothers and fathers, who have bequeathed us traditions of vocal expression. 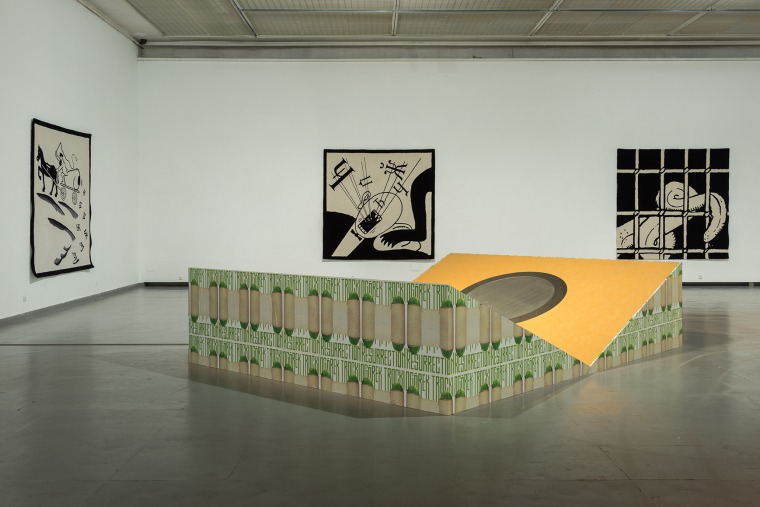 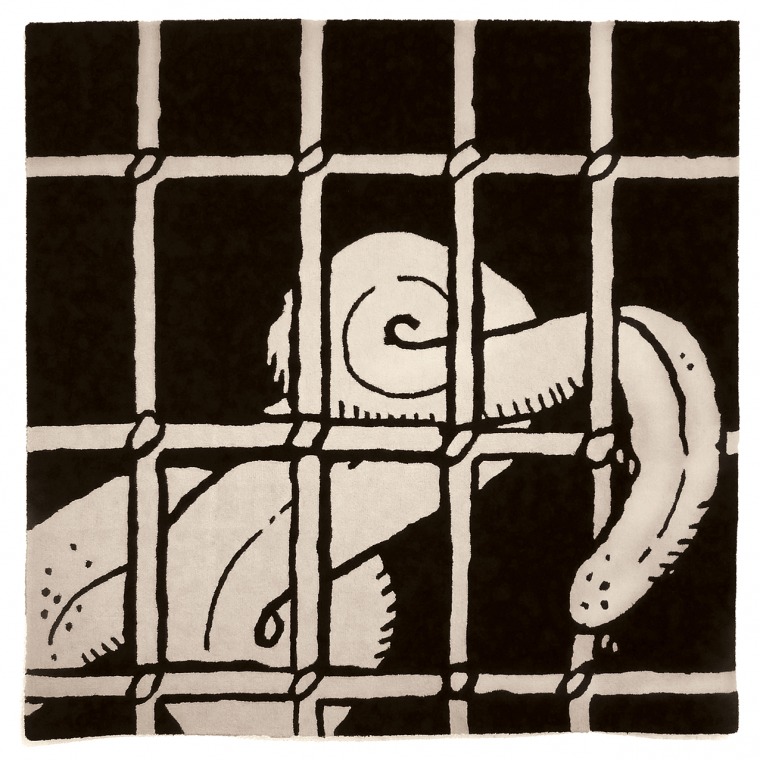 In another series of works, Love Letters (2013-2014), the artists continue to investigate the language, with its political aspect, through a display of a series of cartoons by Vladimir Mayakovski, an early 20th-century Futurist poet, who was among prominent figures of the avant-garde experimentation with language. The drawings, which were fully reproduced as tapestry, echo the history of the 1917 Russian revolution, following which the Bolsheviks found themselves to be the inheritors and rulers of the remnants of the Russian empire, for the most part large, Turkish-speaking Muslim communities. Lenin believed that to maintain the "revolution in the East" the Muslim community must be westernized, by way of transcribing of the Arabic alphabet into Latin characters.3

The artists revisit these processes of linguistic erasure and change through the drawings of Mayakovsky: in drawing #3, for instance, there's a figure of a man with four tongues. Each represents a Farsi syllable that is missing from the Arabic alphabet, which marks and differentiates its speaker as a separate identity within the Muslim, Arabic community and points out that the Farsi language has been assimilated into Arabic Islam. In drawing #9, a figure painfully screams Cyrillic syllables in an attempt to pronounce the sound [dj]. It has undergone various manipulations – once with the rise of the U.S.S.R. and the enforced transcription of the Arabic alphabet into Latin, and again in 1939, when the alphabet was again changed, this time into Cyrillic characters. 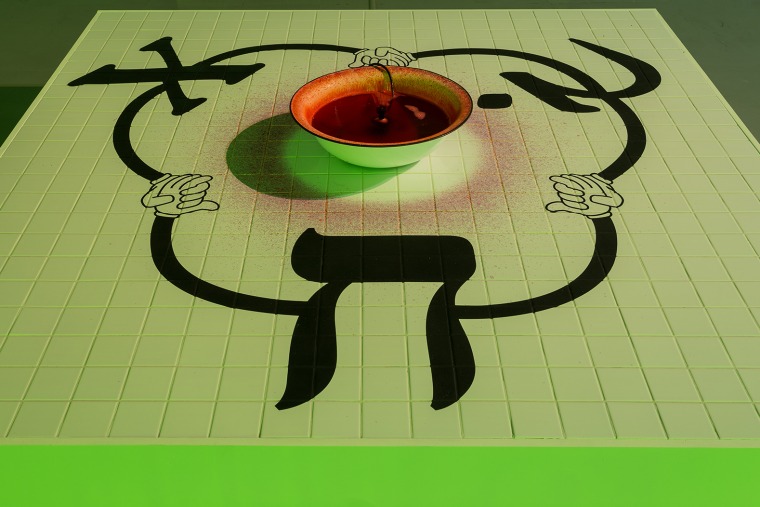 Even the tongue has not escaped the inquiring eyes of the collective's members, and they define it as the "principal singer, who occupies a central position in every act of resistance, be it sensual, political, or metaphysical." The tongue of the collective's members indeed seems to have rebelled against all conventions. It has been detached from the body it serves, wound around itself like a blind, slimy creature trying to find its way in an alien world, or wallowing behind bars after being marked as an enemy and a nuisance. 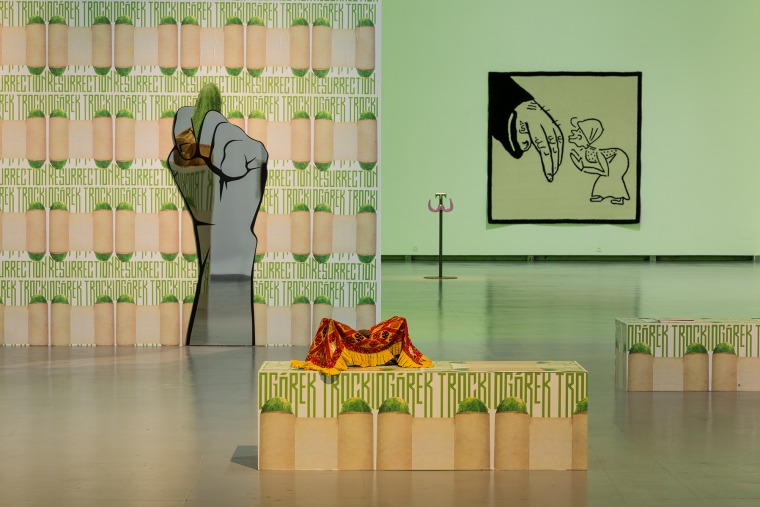 The non-local viewer may experience some difficulty in relating to these works, so rife with complex motifs of politics and identity. The curatorial narrative (of the artists or the curator) is fascinating and intriguing, a magic carpet ride through the demographic, linguistic, religious, and social realms of the kingdom of Eurasia, which also places on the viewer demands of deep knowledge and extensive study of the historical narratives that hide behind the works. Those who take the challenge and dive into the world of stories that the works present are guaranteed a fascinating journey, full of surprises, in which the sheer delight in the sensuality of the mouth and the word games manage to bridge gaps in local or historical knowledge. The mouth, they keep claiming throughout the exhibition, is the opening to a collective human culture, a sophisticated biological machine that documents and preserves processes of expression and silencing.

"It is of utmost importance that we repeat our mistakes as a reminder to future generations of the deapth of our stupidity." This phrase glows in fluorescent lights under a row of neon bulbs that interfere with the reading, illuminate the viewers in the show, and reminds them, in the sickly greenish light, the message that hovers over all the works: the mistakes of the past contain multiple times, existing in a continuous present. The collective plunges again and again into the present to retrieve fragments of hidden histories. 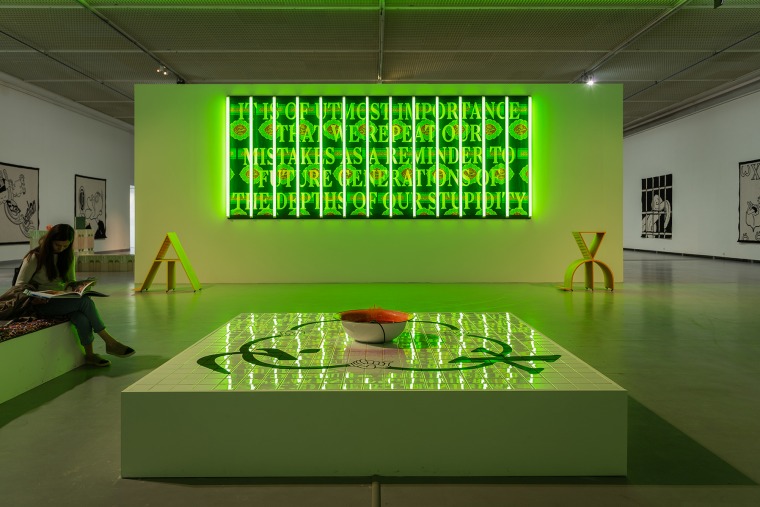 The exhibition "Slavs and Tatars. Mouth to Mouth" was shown at the Contemporary Art Center in Vilnius between September 9 and October 18, 2017. 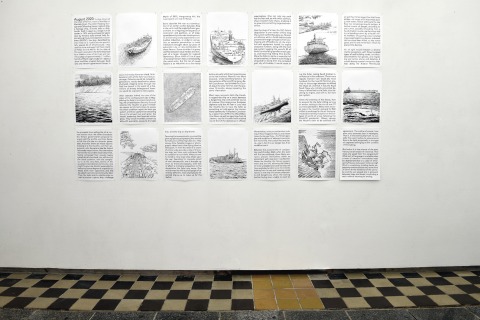