Michel Nassar in conversation with Rabia Salfiti on travelling, meditation, propaganda and martyrdom

Rabia Salfiti was born in 1979, in Shafa-‘Amr, near Haifa, to a traditional Catholic Arab family. At the age of 19, Salfiti left to study interior design in Italy, and subsequently traveled throughout Europe and India for a decade, spending his time in activities as varied such as working as a photographer in a travelling circus in Greece, and studying philosophy in Varanasi. These influences are weaved into the threads of his photography, installations, video, and performance art, as he explores what he describes as the relationship between individuals and their environment, the form and the formless, and truth and falsehood. His most recent works have been featured in group exhibitions at the Sommer Contemporary Art Gallery in Tel Aviv (2011), Beit Hagefen and WIZO Academy of Art and Design in Haifa (2012), and the Palestinian biennial Qalandiya International (2014). He also worked as art director for Maha Haj’s Personal Affairs (Post-Production), and Hani Abu Assad’s latest film, The Idol (2015).

Our interview was conducted in my home in Wadi Nisnas, a cold studio apartment from the 1880s with an arched ceiling and tinted windows. 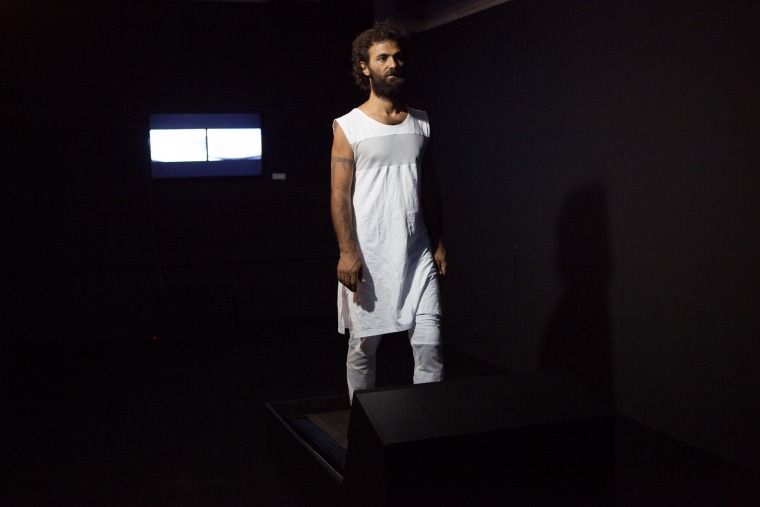 MN: I couldn’t find any of your work online. Why?

RS: I don’t like to put things online — especially Facebook. Context matters. In a gallery you create the energy, the atmosphere, and people can go inside and think. But Facebook is a disaster. The same for Instagram. You can’t design the experience in the same way. There’s no deeper layer. What’s put on there… they’re all pictures, not images.

MN: How do you distinguish between a picture and an image?

RS: A picture is only what you see. It’s shallow. An image is a photo that triggers self-reflection. In an image, there’s social, philosophical, and personal context, but Facebook decontextualized. It’s a big mess. How can you look at a photo when there’s so much distraction? A gallery, on the other hand, helps you to think.

MN: Do you often think a lot before you conceive of an idea for a project?

RS: There’s no origin for my pieces... Sometimes I feel as if the cosmos is playing a game with me. Everything just clicks. I think it’s because of my library, my readings, my travels. I’ll be in class, maybe, or driving, or doing dishes, and the ideas come. Water stimulates me a lot. I don’t own any of the work I produce. I never sign my name on a piece of art. I don’t really own it, so I write instead, “done by me.” Everything comes from deep deep down inside. It’s there, in between the form and formless, where the process of creation exists. I’ve been influenced a lot by my travels. I’m thankful to Italy, to India, to Greece, to England. To all the countries I’ve lived in. From each country I took something, and each country opened my eyes. Traveling has added layers and layers and layers to me, made me think more and more and more. It helped me understand that there’s something more real, something deeper than social forms.

MN: What do you mean?

RS: Social forms are the symbols used by different societies at different times. For example, the different fashions in different countries, or the way you can have sex before marriage in this society and not in that one. It’s a dynamic process. Moving between different forms of society creates friction and conflict. White Noise…what the fuck is that sound… it’s the sound of the reality beyond social form. It’s the state of the intellect before it takes form.

You know, when you are totally silent, you can hear your brainwaves move from the right to the left side? The sound of that magnetic field inside your mind is very similar to the sound of white noise. I heard it once in Greece. It was 2 AM, and the electricity line was making this sound—zzzz. I was listening, and thought it sounded familiar. Later, I learned that in deep meditation you can hear this white noise, and that it is similar to the behavior of the static, the black and white dots on the TV. They’re in eternal conflict, like the mind. This is what my performance “White Noise” explores. The work speaks about the four stages of consciousness: sleep, unconsciousness, consciousness, and superconsciousness.

MN: When did you start meditating? How did it influence your art?

RS: Meditation opened my eyes. I started in 2004, and it somehow changed my life. In 2009, when I went back to India for the third time, I realized there was a relationship between the intellect, meditation, and photography. Because photography, like all art media, is a reflection of what’s inside your mind. As soon as you identify with a situation outside, that means something inside you is connected to it, and is being transformed into shapes and lines and colors. At this point of connection, when something formless inside you has taken form outside—you click. Meditation is the byproduct of practicing and engaging with art.

MN: What makes a good work of art?

RS: In my opinion, a masterpiece is that which triggers your imagination and makes you dive into the hidden world of the unseen. It opens doors, and never closes them, and as many doors you open as many more appear. Look, life is a metaphor and through my work I document this metaphor. For me, doing dishes can become a metaphor, walking can become a metaphor, the car can become a metaphor. The treadmill. A landscape. Everything’s a metaphor, and I document this by moving it from one context to another, out of the mundane and into the gallery. In the details of my surroundings I see a reflection of the individuals who make up society. Art has a fundamental role in shaping the world. Architecture. Fashion. TV. Look around. Everything passes through the hands of a creator. You know, propaganda is devilish, the way it uses art to manipulate the world. 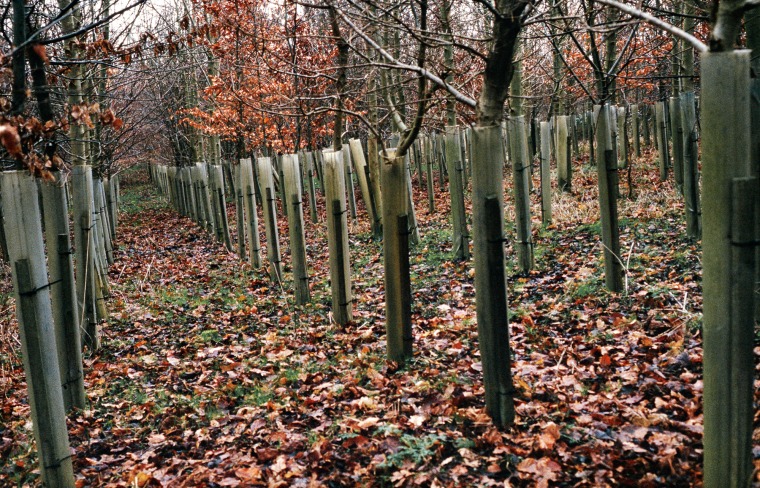 MN: How do you draw the line between propaganda and art?

RS: Art makes you think about what you’re feeling, helps you develop yourself. Propaganda plays on your emotion, turns you into a soldier. It serves another, manipulates you to serve the interest of someone else. It can be anyone or anything, a priest, a politician, Zara. Apple sells you one idea and Daesh another. Israel manipulates its citizens to want to join the army. And Israel is not the first country, nor will it be the last. All countries are manipulative.

I once heard that meditation is the enemy of the country. The best weapon against capitalism. When you meditate you don’t need anything from outside yourself to feel happy. Then you work only for your basic needs and work becomes love. Psychology has taught us the same thing. The more you consume the sadder you become. But the politicians, the people in power want you to consume more, and then they sell you frustration. You have to run to survive, and you become like a mouse on the wheel running running running without any time to think.

This is where art comes in. I think art for art’s sake is complete bullshit. The artist can’t be separated from the whole. Even the price of paint is politics! All this shit is connected! The way I see things, art can raise awareness. It can be playful, but I am not here to entertain. I am not a bad American movie. Audiences aren’t stupid. When I do something obvious in my art, I say, “here you are, stupid, open your mouth.”

MN: You perform often. Why? What attracts you to enact your body in your art?

RS: The reality of yourself in a work of art is truth, a living sculpture that changes with time. You become part of your work, and you live it for two and a half hours and your state of mind changes with the audience’s. There’s a difference between knowledge and experience, and through performance there’s a direct experience. Performance is the fact of the here and now. Any recordings we have of my performances are only an indication of what really happened. To really experience the work of art you need to be there. The audience is as much a part of the performance as I am.

MN: Why do you choose to pose nude in many of your images?

RS: For me, to be nude in public symbolizes being yourself, without the clothing imposed by society. Persona in Latin means mask, and clothes are a part of that mask. To deal with nudity is to liberate myself, to return to childhood… I’m not telling people to go naked. It’s about feeling comfortable with myself. I came here naked from the darkness, will live the theater of life, and then exit.

MN: You told me you used to sew your own clothes?

RS: Others sew. I design, or my friends do. Why should I buy clothes from Zara when hundreds of millions of people end up wearing the same thing? Individuality is getting lost in modern aesthetics. It’s totally crazy that we have more designers than ever and yet we’re all wearing the same clothes, the same brands. We have less and less options, and yet people think they are free to choose. If the government gives you three choices, maybe you think you have freedom but you have shit. Everywhere they sell this illusion of democracy and liberation but in the end they control what you think. Everyone is crucified here. This is the country of Jesus. It really is. To go to the army is to be crucified. You don’t choose it — they just stick it on you. And then you have to suffer. All of these martyrs…it’s manipulation.

RS: That’s bullshit. If everyone were at peace with themselves we wouldn’t fight for borders or countries because the state is only a reflection of the human ego. In the past we had smaller egos and we didn’t need borders. Now we have big, huge egos and we need borders and even fences, like Netanyahu wants. To want a fence is to have the biggest ego. At least the situation here makes me think more. Do you know shambhala? It’s this Buddhist idea of a spiritually and physically pure kingdom. Israel used to be like shambhala. But God is not a civil engineer: Judaism died when Zionism occupied Palestine in 1948. Before then, Palestine was the material name for this land and Israel was the spiritual name and the country was as if it were a whole person. Now it’s schizophrenic.