Goni Riskin joined a residency program at Arthura – a new center for art, design, and community in Emek Hefer (Hefer valley), in central Israel. She has chosen to take mostly pictures of the elderly population, in an attempt to understand how to create interaction while maintaining social distancing and wearing masks and gloves. 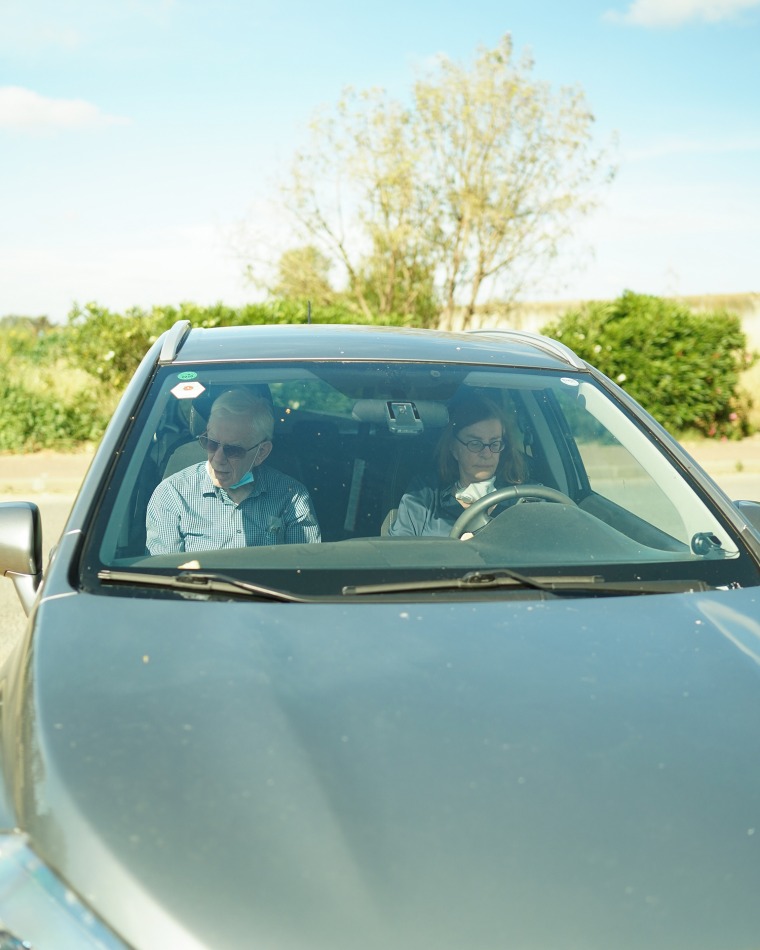 My parents
First week, Emek Hefer, two days before it became possible to visit family. I haven't seen my father in about three months, until this photo shoot. Virus, restrictions, anxieties, all let behind traces of trauma and caution. However, after all that he has been through, I cannot stop him from living nor deny him the pleasures of life. And the end of the meeting I didn't hug him, although I wanted to. I just signed a heart with my fingers. 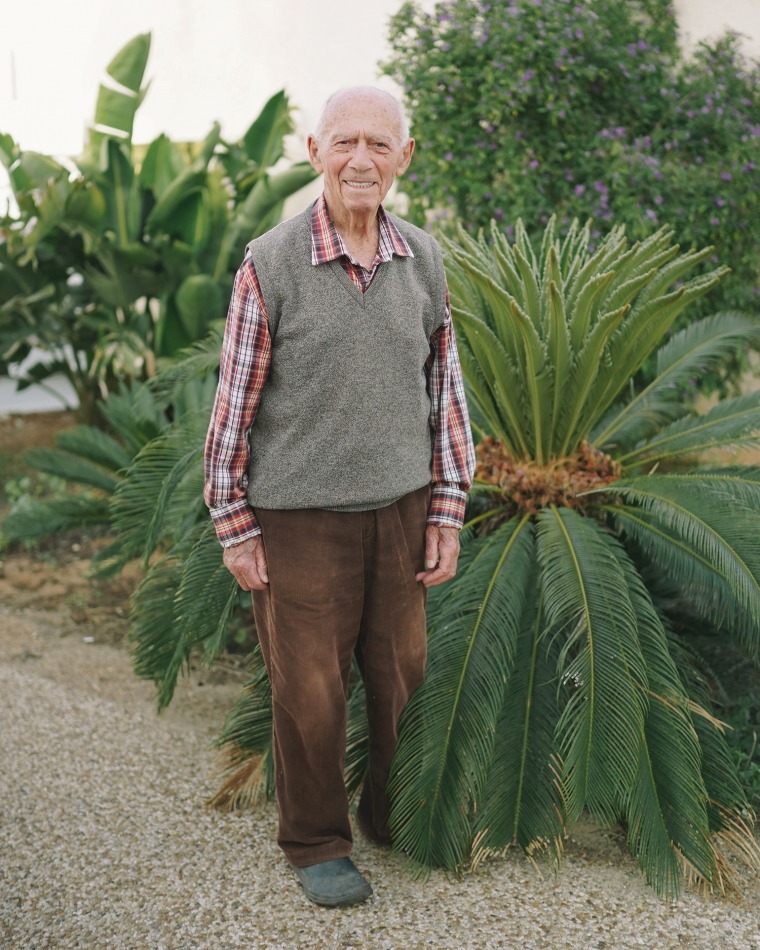 Menahem
Menahem, a citrus grower, Kfar Monash. We met accidentally, and I did not get to ask him a lot of questions. Because of the coronavirus, I tried to keep my time with him short. Only the following week, they told me he was 90 years old. He was happy to be photographed, cooperated with me, and said to me that he loved his orchard, which reminded him of his youth in its infinite paths.
I revisited him, this time wearing a scarf around my nose and mouth. He said, "what do you want with the old people? Leave them alone already." I said I didn't know; maybe they remind me of my parents, whom I miss. Menahem laughed and said that actually, he would soon be 94. 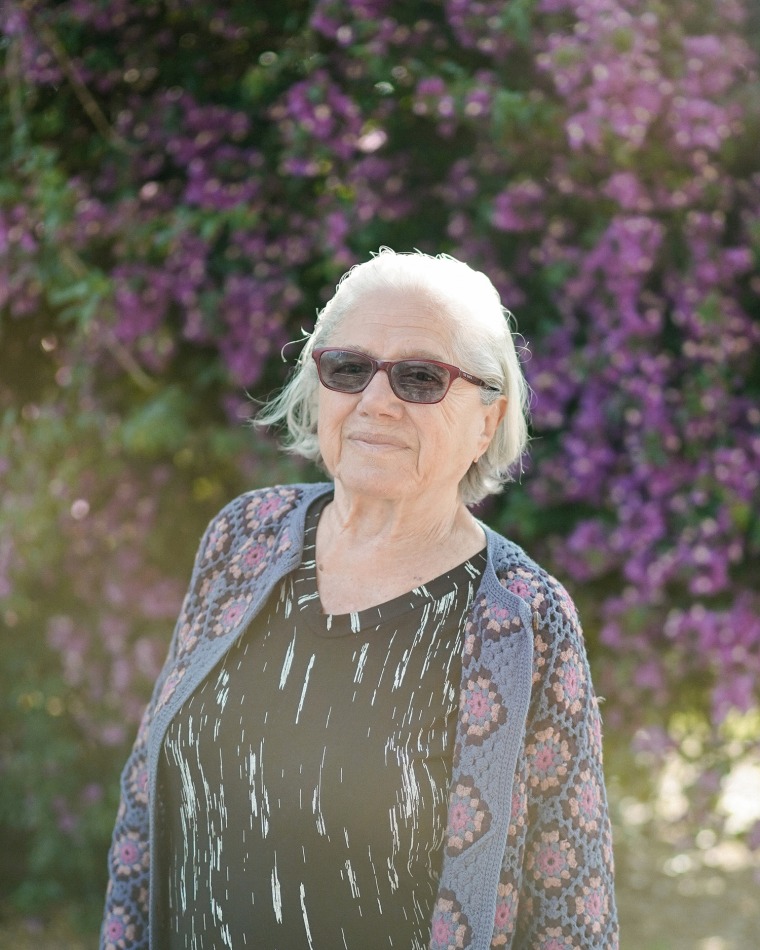 Sonya
I met Sonya several times as I strolled throughout Kfar Monash. The first time, I found her sitting alone in her garden. I photographed her from afar, and she didn't notice. Next time, I asked to take her picture. I positioned her near the bougainvillea at the entrance to her house. The purple of the flowers blended nicely with her cardigan. In this photograph, I've made a little manipulation in the editing, creating an illusion of closeness. At the beginning of the year, I replaced all my photographic equipment and bought a few lenses that were important to me at the time. But after two months of unpaid leave, I cannot add 50mm or 85mm lenses, which could have solved the problem of the required optical distance; it forces me to use some tricks that hold a certain playful charm. Sonya said she was addicted to fruit: "In Romania, we had lots of fruit." 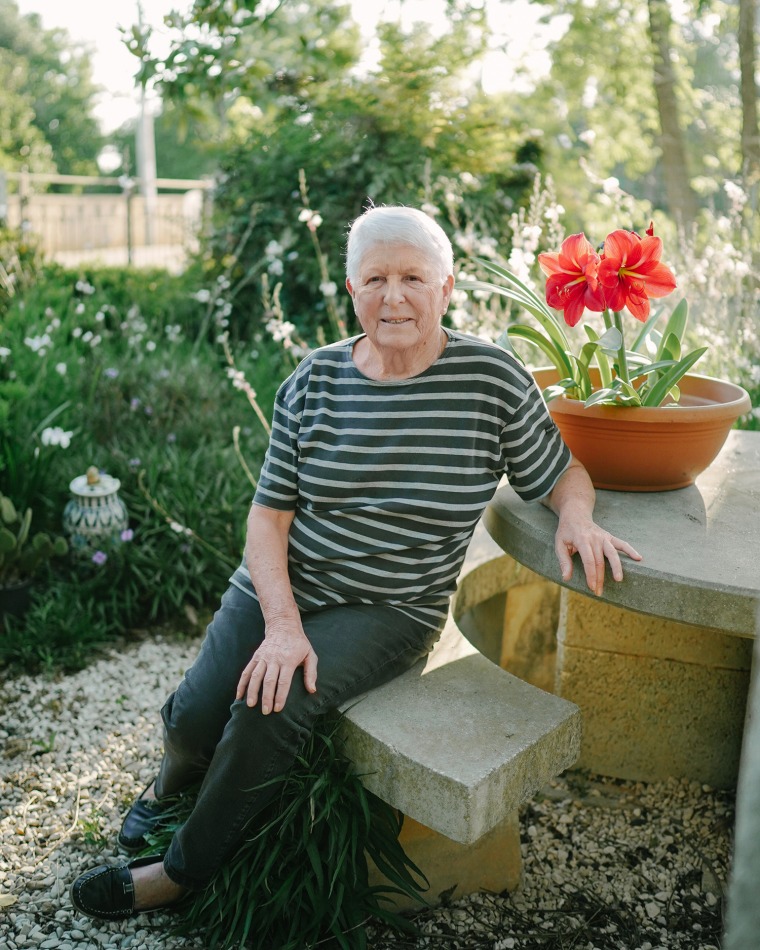 Ilana
Beit Itzhak, a week after it had become permitted to visit grandparents. Unknown distance. I photographed Ilana (who is not my grandmother) sitting by the amaryllis in her garden. I loved the stone table, too. I asked her: "What is your favorite plant?" She said there was no particular one, but she didn't like calla lilies because they reminded her of funerals. 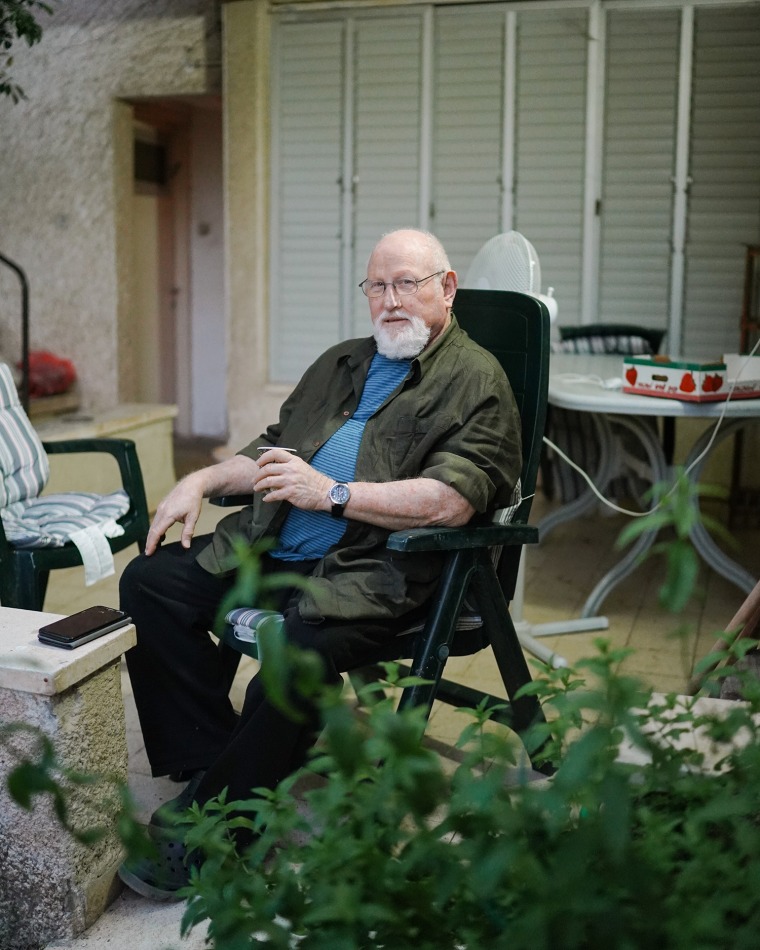 Yair
Endless wandering throughout Beit Itzhak. I photographed an empty tail of a rocket containing shoots of spiderwort (wandering Jew). Yair was sitting in the near garden. I offered to take his picture, and he agreed. He told me he was named after the underground tag of Avraham "Yair" Stern. Yair provided more details, but I decided to preserve some of the mystery. I asked: "is the distance between us two meters?" he nodded yes. 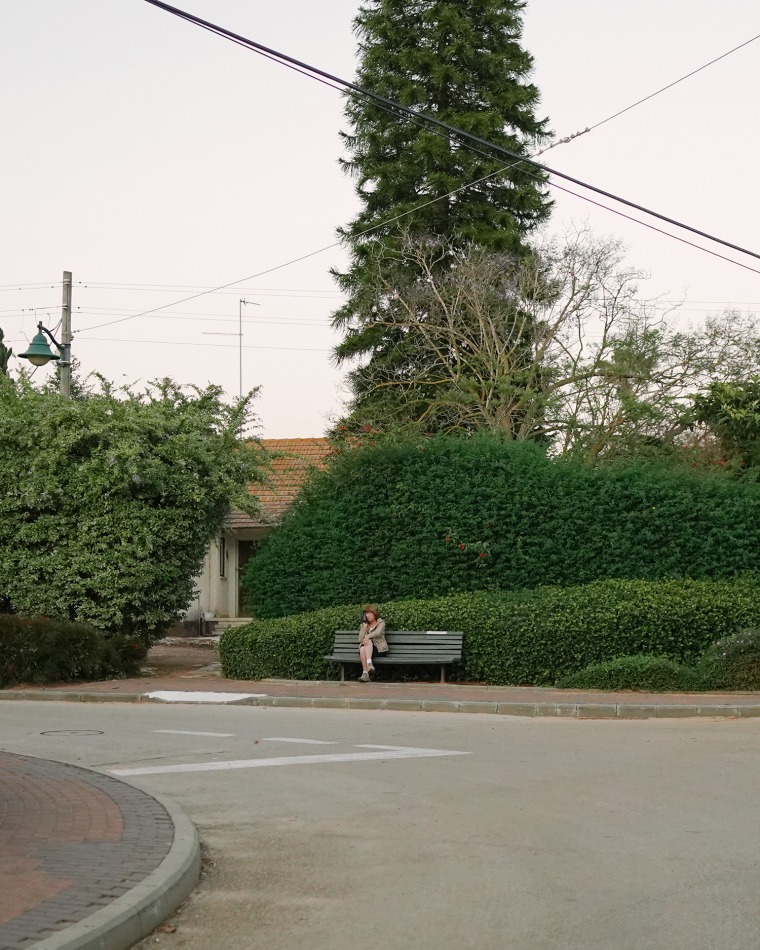 Unknown woman
An unknown woman is talking on the phone in Beit Itzhak. I couldn't wish for a different shot. 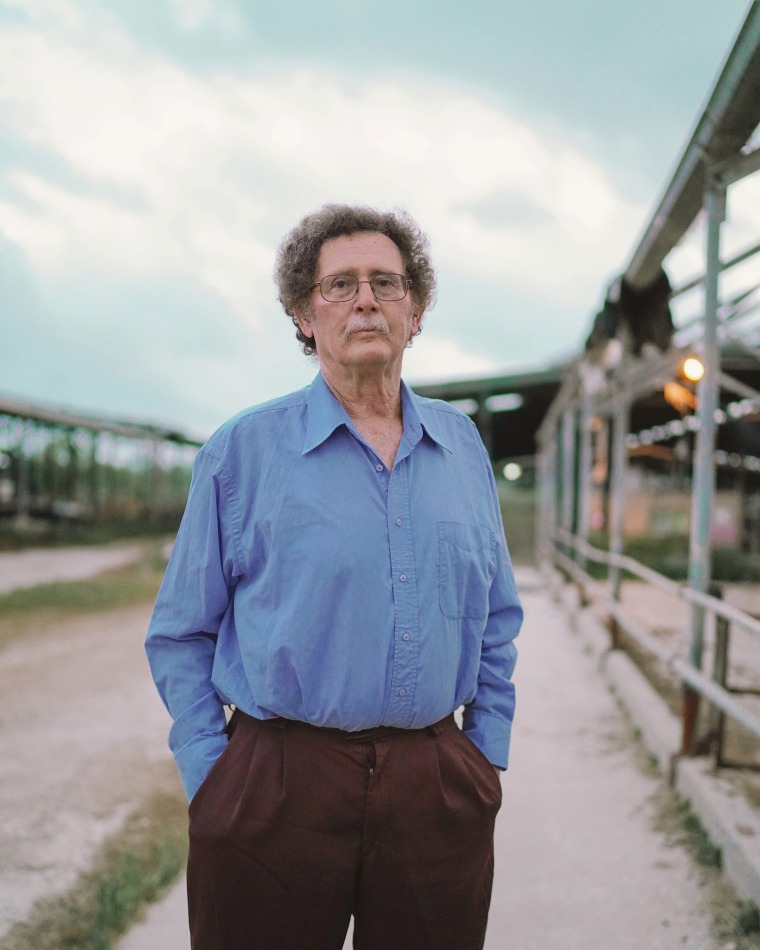 Ronny
Dairy farmer, Beit Itzhak. An extremely long day. I meandered through four villages, a distance of more than ten kilometers. Ronny saw me from across the street as I was shooting vacant yards for half an hour. He invited me to see the cowshed behind his house, neglected since he had retired four years ago. I photographed him there, in the cowshed, in the neglect. Two locations and three situations. I selected the last shot. I can say it has been the closest, as we have become more familiar. Ronny's granddaughter, who accompanied us, announced ceremonially that her grandfather shells 100 pecan nuts every evening. 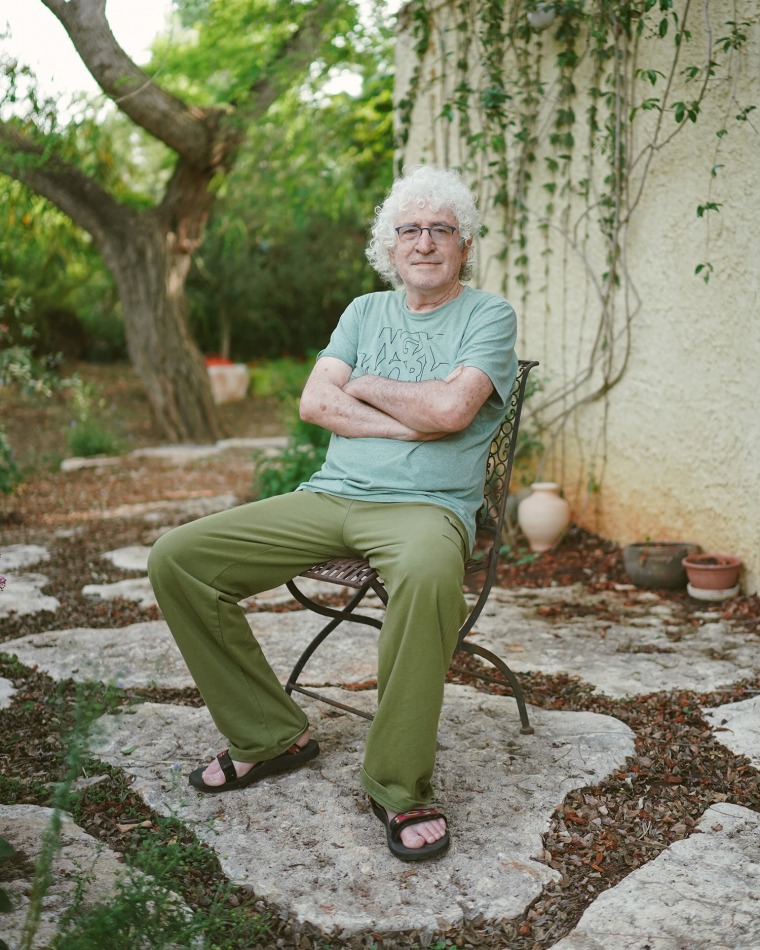 Yaakov
Sunday, May 17. Blazing heat. I marched eight kilometers around the valley, searching for new locations and people. I returned to Kfar Monash at sundown. I made the appointment with Yaakov on the morning of that day. So far, this has been the only pre-arranged shoot, and after Ronny the dairy farmer, I'd reached a new record of intimacy: Yaakov and his wife invited me to their home, and served a glass of ice water, black coffee, and poppy seed cake. I nibbled. I photographed Yaakov in his garden. Despite the new intimacy, I preferred the physical distance because I liked the location in combination with the colors of his clothes, and wanted them to be visible. 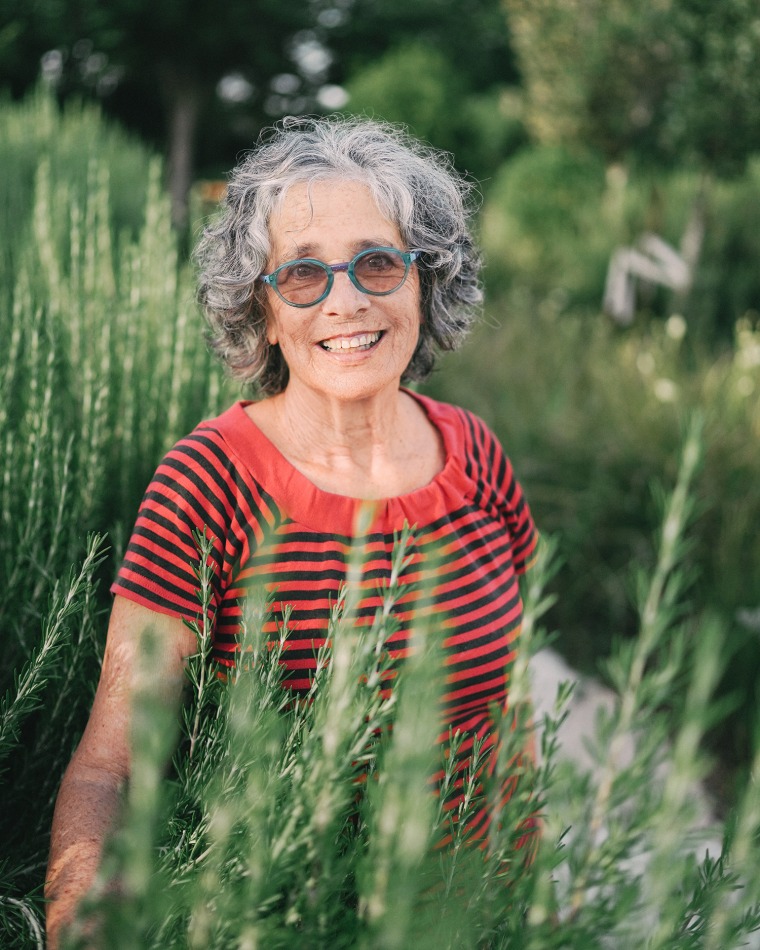 Miriam
Yaakov's wife. We strolled together around the area after we got close, and I tasted the poppy seed cake she had baked. That is, I touched the plate, the cup, and the teaspoon without any protection. I've been in Emek Hefer for a month now. There are vast expanses here. For all it's worth, I hardly meet people.
Until I must immerse myself in a different environment, the feeling is that we are all in the same boat, one non-biological family. 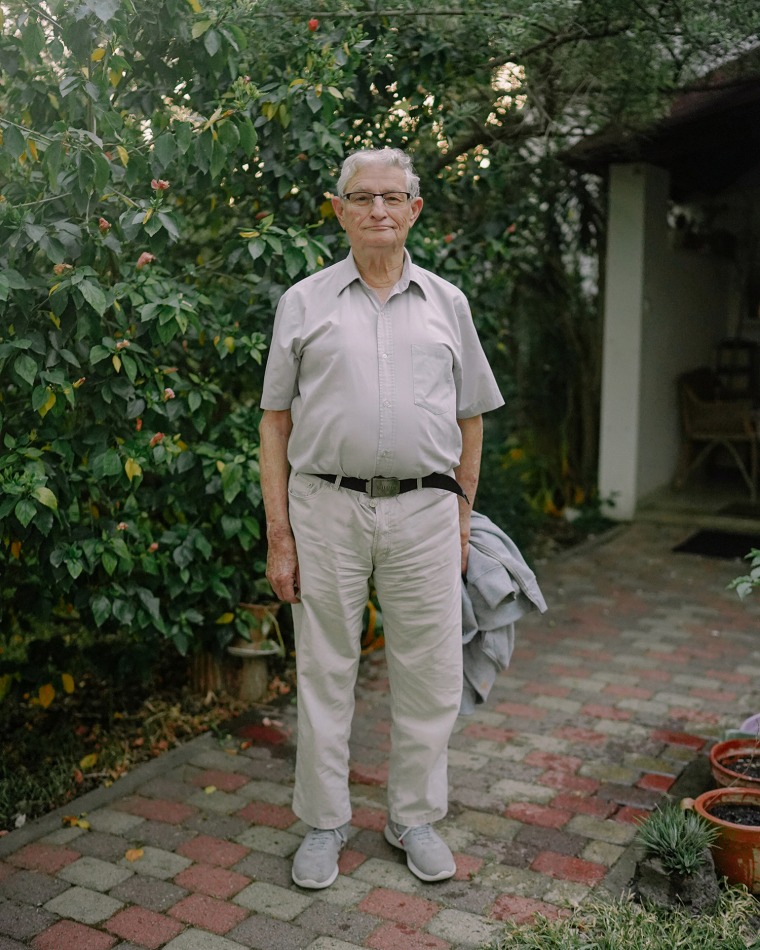 Mario
For weeks I've been walking many kilometers through the area. Mario and his wife were standing in front of their house in Kibbutz Ma'abarot. Mario said he was a photographer and that all photographers hate to be photographed. I nodded in agreement. I realized that for my sake, he had deviated from his rule and agreed to participate. He said he liked to photograph nature, the sea, but not the touristy areas – they are boring, he claimed. I agreed again. It might not be Mario's most flattering portrait, but I liked the country loveliness, the simplicity, the small details. I photographed him from a distance of two meters, and also one meter. 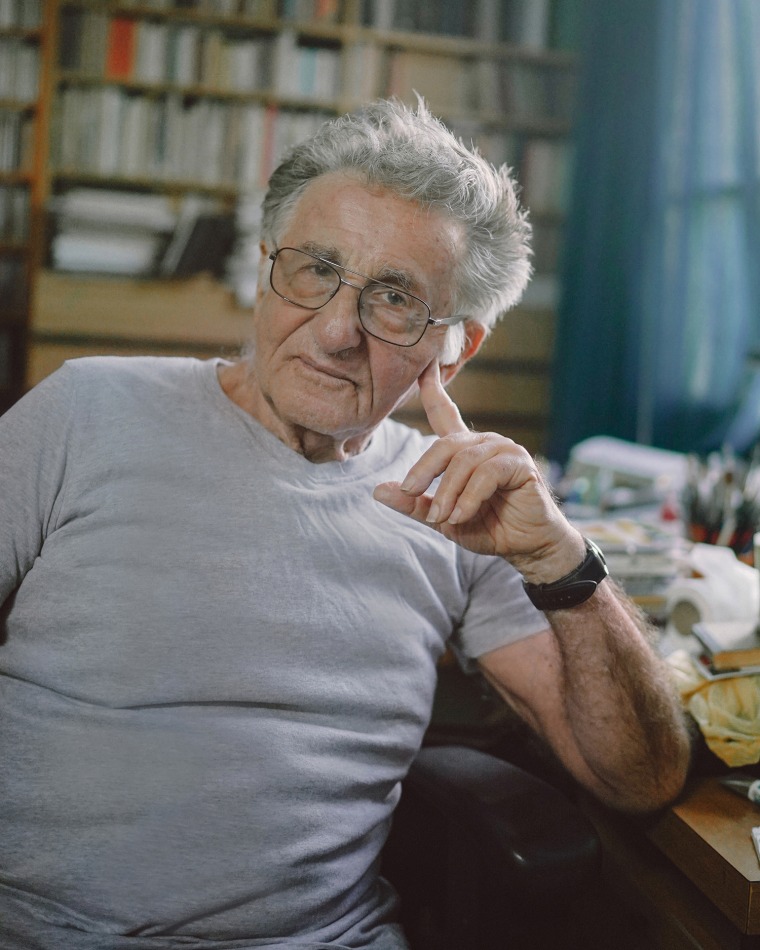 Yaakov
Five hours before I was due to leave Emek Hefer and be on my way to Tel Aviv, I received a recommendation: Yaakov Guterman was an interesting character, they said. He lives in Kibbutz Ha'ogen. I photographed him in his garden, sitting on a white plastic chair. I insisted on leaving in the blue towel hanging on the back of the chair; it added color. At the end of the session, Yaakov said: "On top of everything else, I'm a painter. Would you like to see my studio?" I'm the only person who has been invited to the studio since the coronavirus. Yaakov asked me if I'm infected, and I answered that I didn't think so. When I entered, I avoided touching things. I only moved the fan from behind him. I made sure to tell him about it. He might want to disinfect it later.