In a long overdue encounter with Hilla and Bernd Becher’s photographic grid Yair Barak discovered that his intellectual, rigorous experience as a viewer of the works has become spiritual experience. Why has that happened, and is the genomic map of Israeli typological photography indeed close to its German counterpart, or rather the American one? Reflections and insights following the departure of Hilla Becher.

In 2008 I laid eyes on Hilla and Bernd Becher’s photographic grids for the first time. This was a little more than a decade after I got to know their work as a photography student. Noting the gap between familiarity with their theories and leafing through their thick tomes, and the actual, physical encounter between the viewer and the display wall , I’m compelled to take a another look at one of most obsessive, fascinating, passionate, infuriating, and dull phenomena of 20th-century photography.

At the end of the 1950s Bernd Becher, then a painter and a photography student, met a young photographer named Hilla Wobeser. They met at the Düsseldorf Art Academy, which was to become their indubitable stronghold in the future. The two artists started showing together in the 1960s. Their most important exhibition, showing typologies of agricultural and industrial buildings in Germany, was titled Anonymous Sculptures (the show won a sculpture award, despite having been purely photographic; regarding the action of the camera as sculptural suggests another lovely reading of their work). During the next 30 years (actually through the 1990s) the Bechers have functioned as a two-headed photographer, exploring functional architecture in Europe and in the US, in its days of decline and approaching extinction. In conjunction with locating and photographing the buildings they also took care to catalogue them, systematically and meticulously, into prototypes. 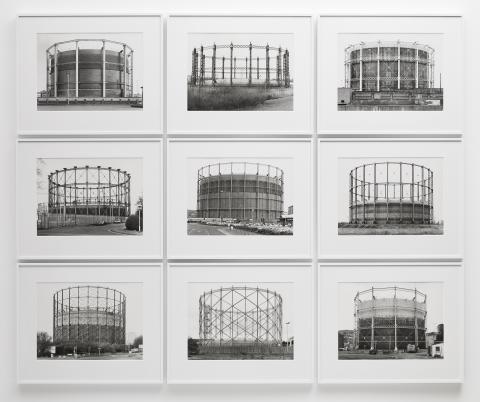 In the late 19th century the modernist architect Louis Sullivan has coined the phrase “form follows function,” and it quickly became one of the emblems of modernism in architecture. This catchphrase was doubly true in the Bechers’ work. First, in documenting functional architecture, whose forms were directly influenced by its functions; and second, when they invented their characteristic grid form. If we assume that typological photography is actually a comparative study, then form will follows function, again.

The descriptive is the sublime

What is that difference I experienced, between my theoretical knowledge of the couple’s work and actually looking at it? Generally, it is related to the transcendental quality of the Becherian image. Ostensibly, their on-going project may be viewed as an act of archival collecting, sorting, and re-presenting of an architectural style while employing an absence of photographic style: by adopting an objectivistic approach, as a realization of the idea of the demise of the subject in photography, and as a result – within a system of laconic repetitive images, which at the most teaches us something about the history of the industrial revolution and of modernism in the 19th and 20th centuries. It can be said that German typology is the visual equivalent of structuralist thinking and that Hilla and Bernd Becher are students of structures, just like their predecessors from the 1920s - August Sander, Karl Blossfeldt, and Albert Renger-Patzsch. According to this approach, the Bechers’ investigation focuses on locating common denominators and mechanisms, characterizing the typical, or studying the similar. This way of thinking and these work tactics might have produced documentary, informative work, either deep or shallow, and highly didactic, but the Bechers’ photographs avoid all these. Although they do contain some investigative, pedagogic qualities, those are secondary to an experience of a different kind. I will attempt to understand how my belated encounter with the project had turned from a practical, intellectual experience into spiritual excitation.

Photography is instrumental representation. Some works hide this quality, while some bring it to the fore. I’m aware of no photographic work which is more technical than Hilla and Bernd Becher’s building facades, with the exception, perhaps, of the oeuvre of their student Candida Höfer. The selective use of light (they photographed in spring and in the fall, when the sky was overcast), the determined camera position, and the careful perspective achieved by tilting the camera’s back to perfectly aligned building lines, the exemplary sharpness – all these create at the end point an experience of technical excess, and at the same time of simplicity and directness taken almost to the point of triviality. On the one hand, an act of naming and indexing, the “this” which Roland Barthes discusses in his book Reflections on Photography, and on the other a very elaborate, technically complex mechanism (in order to say “this”.)

The meeting of the seemingly simple and the brilliant is an unsatisfactory solution for the experience I’m describing. There must be another reason. I imagine the Bechers as they face the buildings. A famous story describes how they used to reconnoiter a building for hours, until they could be certain the angle they had picked was the ultimate one. I argue that the trajectory of the gaze, the long staring at the object, the expectation that the building would reveal itself to the camera; these all are present in the photograph. The Bechers’ photography is often considered style-less, and, seemingly, these photographs flatten the point of view, kill the light, and rescind the sense of time and space. They are eternal and mute. However this reserved reticence, with its surplus of detail and myriad shades of gray, becomes the salvation of the gaze, a true enlightenment. This is an exceptional case1 of a static, architectural object, born of necessity and functionality, whose almost intimate presence makes it appear heart-stirring and vulnerable. In order to understand this intimacy we might recall the 1990s portraits of their student, Thomas Ruff, in which young Germans of his generation are shown bare-faced, looking straight at the camera, their presence intense and honest. 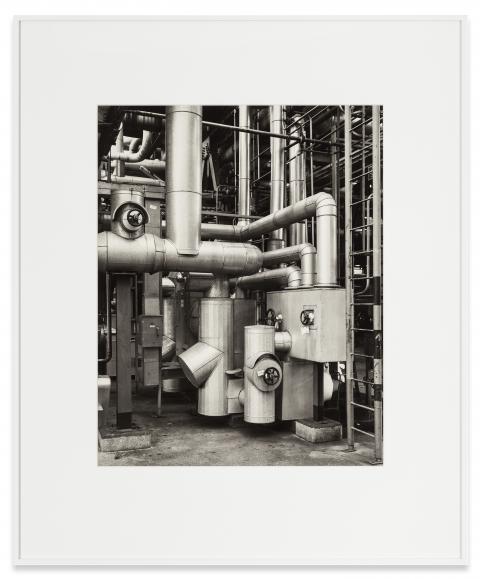 Let us linger a little longer. Superlatives such as these mentioned here require a more in-depth investigation. How do technology, the study of devices, optics, and weather combine to create an experience of the sublime? The work of Hilla and Bernd Becher is part of a long tradition of (mainly male) photographers who make use of large-format camera and large negatives (8X10” in the case of the Bechers). The capability of such photographic materials, with such large surfaces, to record facts is many times higher than that of a standard camera, higher even than the quality of the detail captured by most eyes. Therefore, these cameras create some kind of meta-vision. This is an over-detailed, over-sharp, too real representation of reality. The soft, even light characteristic of the Bechers’ photographs reinforces the clarity of detail and outline to the point of excess. Imagine listening to a mass at an echoing church: the squeaking of chairs, the organ’s pedals, the hundreds of sounds making up the whole. The aesthetic experience created by a Becher photograph is an epiphany.

Absence of Style as Style

The project of the Becher couple has inspired many artists in the second half of the 20th century, not least due to their legendary position as heads of the photography department at the Düsseldorf Academy of Art, and the generations of successful students which have flourished there, including Thomas Ruff, Andreas Gursky, Thomas Struth, and Candida Höfer. For others, who view photography as a meditative or an expressive medium, as a mediator of the spirit or of a state of mind, perceive the Becher School as a catastrophe. An extreme expression of this view can be found in an article, published in 2011 in American Photographer, titled “Has the Düsseldorf School killed photography?”

The inherent misperception of this controversy is that the Bechers’ absence of style has soon become such a distinct style that one of the most tired clichés among photographers is, “Your style is very Becher.” Over the years, the most extreme body of work imaginable, absent a subject, which has raised the flag of object presentation and of the rejection of the viewpoint, has become the most identifiable style in the history of modern photography. Another misperception generated by an indexed reading of their work is the possibility that we are dealing with a romantic body of work. Ostensibly this is a paradox: how can such comparative, systematic, meticulous, and rigid documentation also be romantic? The answer is simple: the clear motivation of the Bechers to preserve, scan, save, extract, and immortalize what has been and is no more, their long-term mission, has undoubtedly become one of the most romantic gestures in modern photography.

The Becher tradition and Israeli photography

I lack the space to discuss the relationships between German photography, the typological tradition, and the ethos of Israeli photography in depth, so I shall limit myself to commenting on the gap between the artist’s practice and the viewer’s experience. At the beginning of the previous decade, the local discourse had been preoccupied with the question of those relationships, culminating in an important show titled Living Spaces, curated by Vered Mimon, in 1998, at the Herzliya Museum of contemporary art. The exhibition showed typological series of Düsseldorf School photographers alongside works by well-known local photographers, including Gilad Ofir, Roi Kuper, Osnat Bar-Or, and the young Sharon Ya’ari. Mimon addressed the photographic practice and tactics: the comparative accumulating of prototypes and the historical and cultural aspects of those series. She argued that serial photography has been directly and significantly influenced by the Düsseldorf typologies, and has demonstrated it by the comparative hanging of works of German and Israeli photographers in the exhibition space. She was correct in her approach since the reading and identification of the similarities has been indeed valid and clear. But I would like to return for a moment to the gap in the viewer’s experience of these series. Israeli typology tends to evoke the local melancholy in many ways: it is a critical mirror image of tainted landscapes and Zionists organizations which have scarred daily life and public space. The German corpus, on the other hand, being no less critical, generates wonder and amazement, a trembling of joy. It is nostalgic for and enchanted with technology on the verge of obsolescence, and relates ambivalently, at the least, to the mechanisms it represents.

I have always thought that, despite the similarities, Israeli photography in the 1990s has been more deeply influenced by the corresponding developments in American photography, as evident from bodies of work of the new topographers of the 1970s, such as Lewis Baltz and Robert Adams. Both American and German photography has turned a specific, restrained gaze at the phenomena of architecture and landscape, from the aspect of historical, ecological, and economic transformation. But while the American topographers and their counterparts in the local photographic scene focus, for the most part, on catastrophes, aggression, and militarization by both armed and real-estate forces, Hilla and Bernd Becher turn the buildings into monuments: they are displayed in all their splendor and the gaze directed at them is full of wonder. In fact, it might be said that the Bechers’ photographs capture a state of pre-collapse. This is the last exaltation, a hymn which is both a requiem and a lamentation. Israeli photography, following in the footsteps of the Americans, leaves no trace of the sublime. This is photography post- the collapse of values and of architecture, and the role of typological photography here is to sort the atrocities, not to map architectural styles and file them away in some historical archive.2 If we embrace the pre and the post approach, it should be easy to think of these two views in the context of the history of the medium itself and of the place technology occupies in that history. The couple’s typologies are a glorious eulogy to the analog photography of the 20th century, while Israeli photography is an honest recognition of its demise.