Do the works of Michal Makaresco represent cheap fetishism and dubious situations? Were they made casually, easily, or on a whim? Hagai Ulrich visited the show at Hamidrasha Gallery in Tel Aviv and came back with thoughts about good taste, honesty, as well as questions about weight and scale.

In "Walk Me Home," Michal Makaresco's show at Hamidrasha Gallery, fragile, cracked, dirty, crumbling small sculptures are displayed. They are made of cheap materials such as clay, plywood, paper, and wood, combined with objects and remnants of common things, twigs, and trash gathered in the street or from dime-stores. The sculptures are set on simple wooden tables, shelves, or improvised wood, metal, or plastic stands. 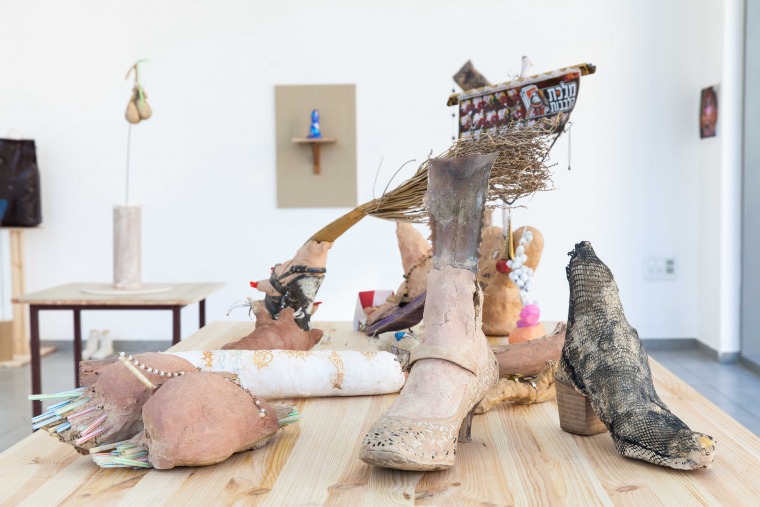 Among the works is a phallic object covered in a blue candy wrapper, hanging from a piece of plywood attached to the wall; a bag of clay resembling a scrotal sac with a straw stuck in it, as if inviting the viewer to drink; a plastic chocolate milk container hangs from a wire and appears to be emptying; a pair of clay feet in thin, white, dirty socks stands near the wall, next to a piece that looks like an ice-cream cone that has crashed onto the floor; a bag of coals has a navel-like hole in it. Opposite, a blue glove hangs from a thin rod supported by an improvised weight. A trestle table holds, among many other pieces, an object made of a small branch covered in clay, in which several dime-store metal rings are embedded. It looks like a long finger sporting a human red-painted nail at either end. Other works include drinking glasses, a hair brush, high-heeled shoes, behinds, some objects with symbols declaring feelings of love, and others presented as objects of emotional, oral, or sexual consumption, marked as objects of desire and fetishism. 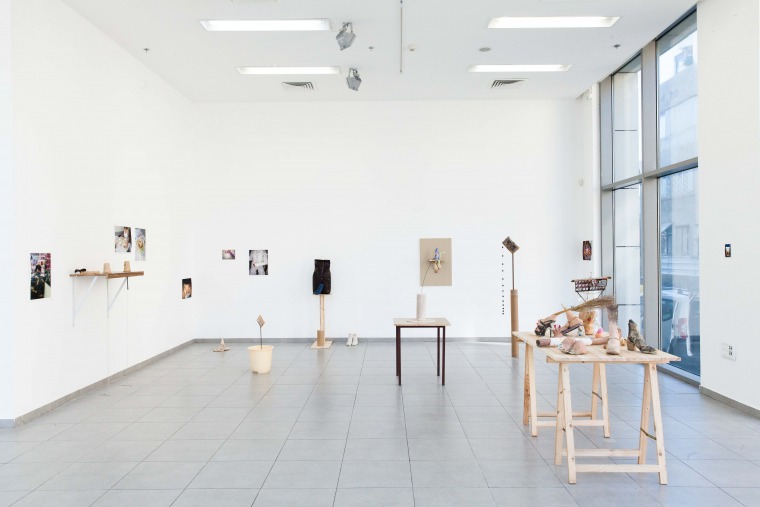 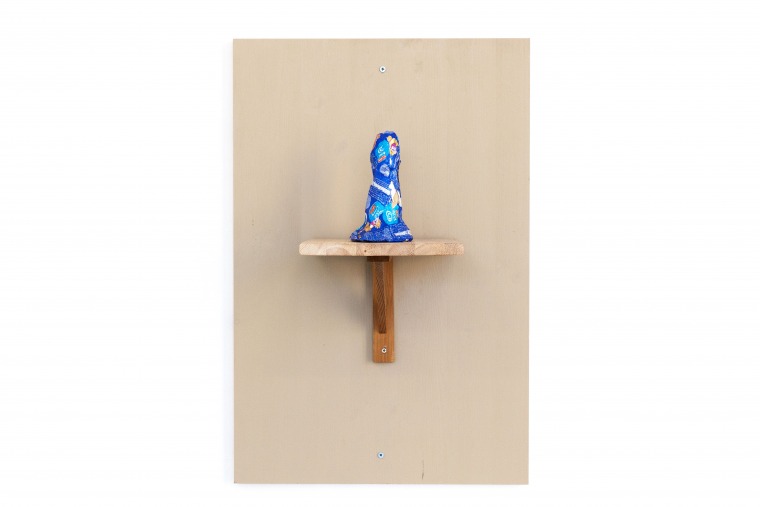 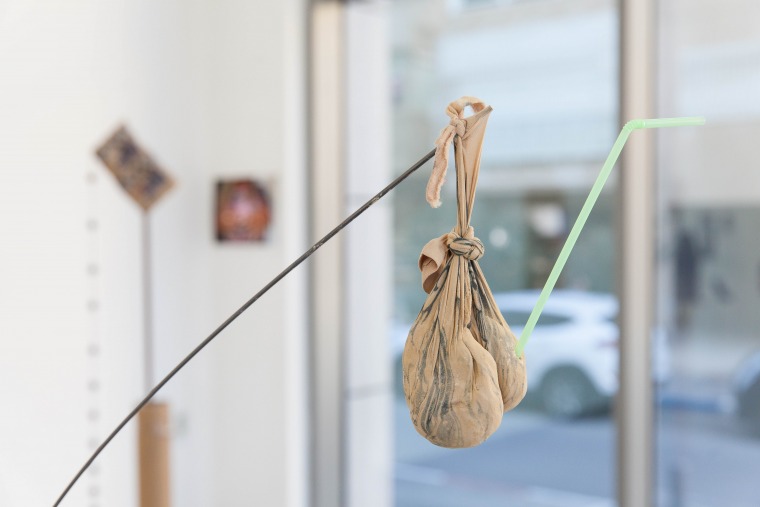 The sculptural quality of the installation, which seems to have been created quickly or in a moment of inspiration, is evident also in the small, unframed photographs that hang on the walls. They show parts of a human body, and figures whose heads are outside the frame or their backs are turned to the camera. In one image, pieces of white bread are set close together as a foundation for a sculpture apparently created during a meal, with a hard-boiled egg and napkins. Another photograph shows a woman's torso, chest, and hands; she presses her hands to her chest, and her shirt says "Amor." She is wearing shiny rings on her fingers and glittery polish on her fingernails. Yet another photograph focuses on a bare lower belly with two eyes, either body painted or tattooed. This picture depicts a man as he lowers his pants or brightly-colored underwear, and the base of his penis joins the two painted eyes like a nose. In another small photograph, a man's hand holds a pink rose and a purple napkin, seemingly letting them fall onto bed sheets. There is also a photograph of a man in hospital clothes with his arm in a cast and his head outside the frame, and one of a woman with a tattooed arm. Her head is also outside the frame, her body is leaning forward, and her hand seems to be offering a paper bowl of olives to the photographer, or to the viewer.

The hands are a significant motif that keeps showing up in Makaresco's sculptures and photographs. They might be empty, frozen in a limp, easy gesture (a hand offering olives, letting go of a flower, or encased in a glove, its fingertips tied with a silver ribbon), or as sculptures of objects intended for manual use and suggesting the touch of a hand (an ice-cream cone, drinking glasses, a hair brush). The hand motif is also emphasized in the handiwork of their making – hand or finger imprints stand out in the clay and on other objects. The rough work includes the ability to break the wood, mold the clay, and get close to the photographed subject using a smartphone, thus imposing a human scale on all the works. 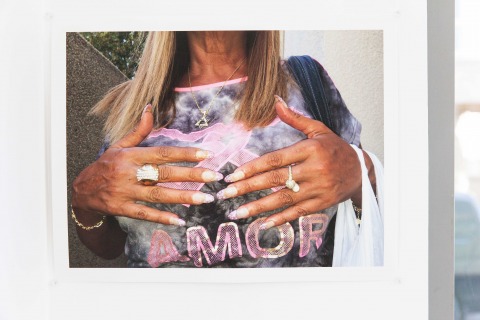 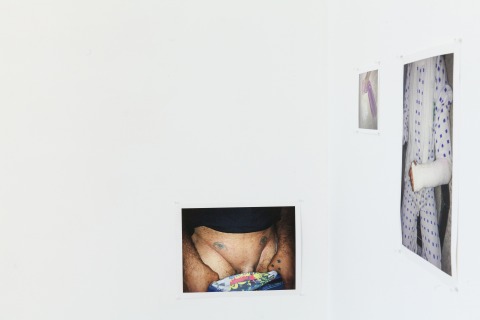 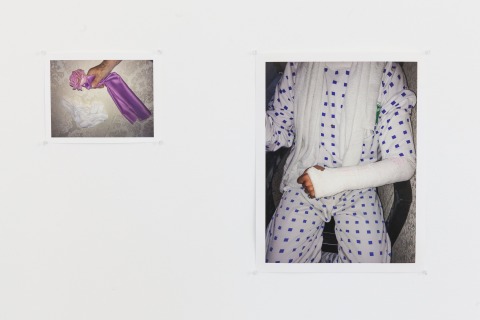 Makaresco presents a drama whose main characters are cheap fetishes and dubious, amusing situations, which tell a story of passion and dissatisfaction. The world apparent in the space and the photographs is one that may be judged as low-brow or contemptible. The figures seem to be inferior, and the situations are described in the text accompanying the show as a Hanoch Levin grotesque.1

However, while the objects are intended for the gratification of desires, they are not at all bright, clean, durable, or useful. Rather than describe a fetish or consumerism, the works expose aspects of value, in the context of weight and weighing. In the various works and the overall installation, Makaresco creates tension between heavy and light; the materials that envelope the heavy clay are relatively light, both as coverings, like the candy wrapper and the socks, and the beads, glitter, straws, and yarn. Lightness and heaviness are also expressed in the way the objects are made: they all appear to have been done quickly, effortlessly, with neither finish nor sweat, and then abandoned. The crumbling of the material happens in a passive motion as we look on. Will some of the objects make it to the closing of the show?

The making of the photographs also challenges the line between the lightness of inspiration and the momentary whim. They look like disposable snapshots, taken at temporary sites and in fleeting situations. Regarding content, too, there's a conceptual flimsiness to the items in the installation, which is associated with trashy culture and dollar stores. Weight as a value is also conceptual. Taste is a matter of values, and thus, the works declare themselves as being of low value – value becomes worth – and the content is related to the plain materials. But the works are also very honest because they expose the means and the materials they are made of, and also because of the unapologetic directness of their content. Value connotes judgement, especially in light of the human weight and scale in the works – the statuettes of hands and feet, and the common objects that hint at a potential human touch, are the size of human hands and are scaled accordingly. 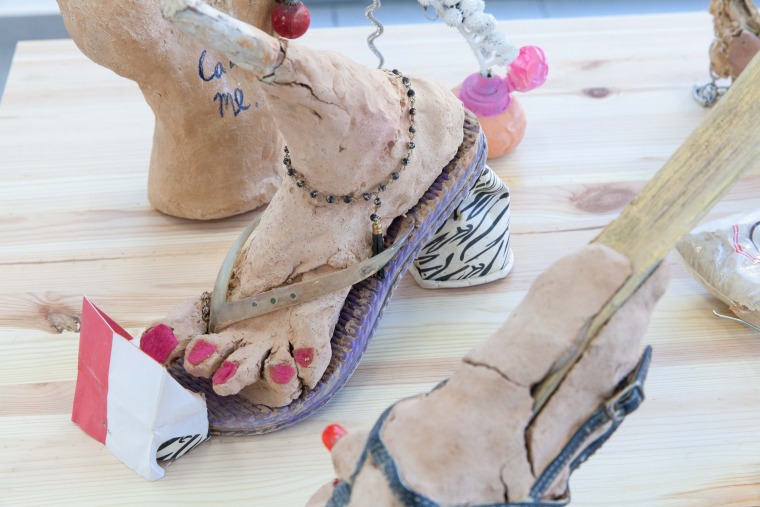 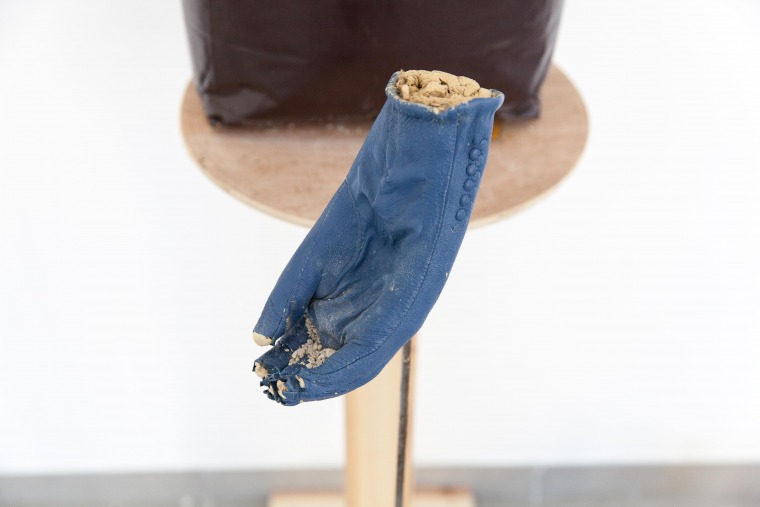 The ostensibly dubious, indecent impression engendered by the physicality and content of the sculptures and photographs is created by the forensic character of the sculptures, individually, but also throughout the installation. It is especially evident in the hand or finger imprints on some objects and sculptures, set side-by-side as evidence that motivates the collection of clues at the scene and constructs a testimonial narrative. However, a testimony of what? Of what crime?

Perhaps the crime in question is the one that 'good taste' perpetrates when it considers and judges the situations and the figures in the show, as well as its aesthetics, as low-grade or base. When the judgement of good taste is discarded, it is clear that "Walk Me Home" presents gentle experiences, fragile pleas and suggestions for intimacy (in physicality and content); they are apparent in all the sculptures, the objects, and the photographs.