In the group exhibition Constelação Clarice we can see, for the first time, Clarice Lispector’s writings situated within the art scene of her time. Hannah Bruckmüller reviews the exhibition that has taken place at IMS Paulista in São Paulo, where she finds the egg that is the beginning. 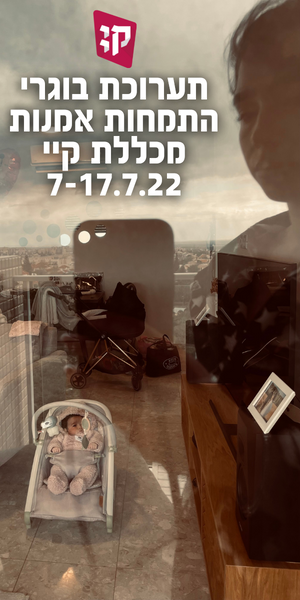 “All that I write you is taut. I use stray words that are in themselves a free dart: savages, barbarians, decadent noblemen and gangsters.
Does that mean anything to you? It speaks to me.”

Constelação Clarice, curated by Eucanaã Ferraz and Veronica Stigger, is dedicated to the work of renowned author Clarice Lispector in relation to the contemporaneous Brazilian art scene. Lispector’s oeuvre includes novels, short stories, children’s books, and numerous chronicles. Today, her work is widely recognized and Clarice Lispector is one of the most eminent names in Brazilian literature. The historiographical accomplishment of this exhibition, on two floors of IMS Paulista, is remarkable: the curators not only situate Clarice Lispector’s practice within the artistic context of her time, but also unfold the artistic context of the 1960s and 1970s in Brazil. Meanwhile, the exhibition traveled to IMS Rio de Janeiro, where it will be on view until October 2022. This review discusses its initial station in São Paulo.

The exhibition catalogue includes images of archival material as well as artworks, with the archival delight continuing on the website that has been created on this occasion. Accordingly, the real space of the exhibition expands into the virtually accessible space – and thereby introduces the vivid Brazilian art scene of the 1960s and 1970s to an international audience. Constelação Clarice presents a thoroughly researched, carefully curated constellation of art and literature, which prompts inspirations and provides an initial framework for new art historical thoughts.

Clarice Lispector, who was born in Ukraine and grew up in Brazil, wrote in Portuguese and perceived herself as Brazilian. Most of her books and stories have been translated into English, and some still await translation. (Fig. 1) Lispector’s uncommon name, which has received and still receives much attention, is today related to Brazilian avant-garde literature and to her enigmatic writing style. Much has been said about Lispector’s unique personality, her sphinx-like appearance, and her reclusiveness. 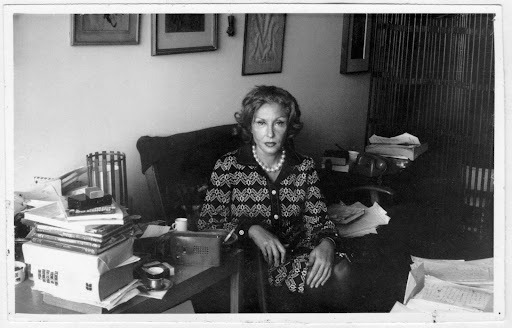 Two small biographical rooms in the exhibition assemble press clippings, photos, and paintings, among them Giorgio de Chirico’s portrait of Lispector from 1945, and her last TV interview recorded shortly before her death in 1977. (Fig. 2) To put the biographical sections in separate annexes on each floor was a wise curatorial decision that had allowed the viewers to focus on (various relations to) art: the group exhibition Constelação Clarice positions Lispector within the art scene of her time and opens new perspectives in view of her own art works and those that surrounded her. For the first time, we can see Lispector’s writings situated. 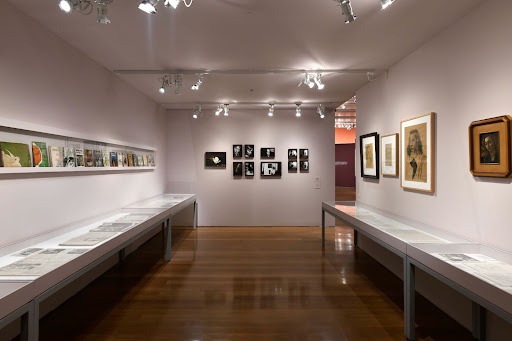 Upon entering the exhibition space on the first floor, the viewers encounter glass cabinets filled with the most intimate material testimonies: her manuscripts and handwritten notes. (Fig. 3) This archival opening makes a paperly overture to an exhibition that aims to put Lispector’s writing in a constellation. Her notes are often rashly written on torn and reused pieces of paper, her handwriting scrawly. (Fig. 4) Hastily, it seems, she scribbled down words on receipts and envelopes, crossed out one word for another, indicated a change of a word sequence by added arrows and stars. 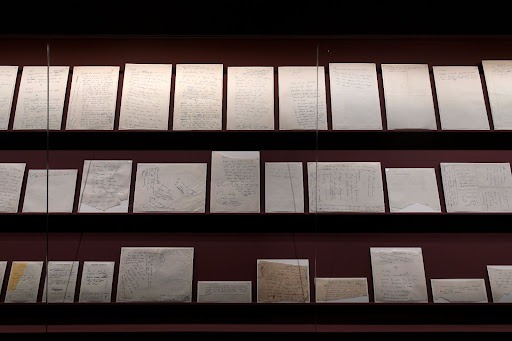 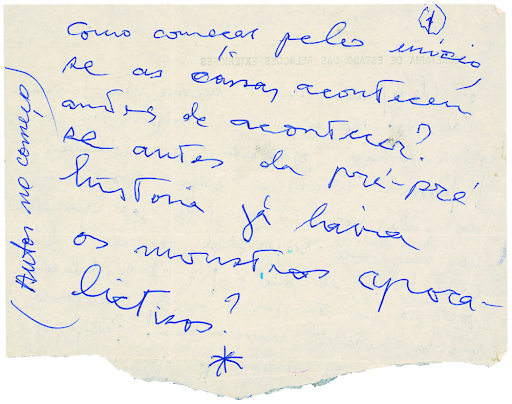 The dimly lit exhibition space of Constelação Clarice, painted in a mellow dark red, is structured by room-dividers, which provide lightly separated frameworks for words and artworks. (Fig. 5) Each constellation is formed by selected artworks and quotations from Lispector’s writings: her words guide the viewers from one constellation to another, while the partitions allow movement forth and back again, to situate oneself between constellations while viewing them. (Fig. 6) The viewing process becomes a performative experience of movement: walking, seeing, returning, continuing to view, seeing again, reading, looking back, rereading. In this regard, the exhibition poetically resembles the style of the writer: To read Lispector is to encounter words, read them again, differently, read back and forth, and read iterations of the same words. Some of Lispector’s “stray words” come back in her books, return in her short stories, always situated differently. Words that stray around in writing and language, words that explore semantic layers, words that linger between the various meanings they inhabit, initiate a performative reading process that characterizes Lispector’s writing. Straying around with the verb “is”, she writes in her book Água Viva (1973, Penguin Books 2012, p. 21): “the most important word in the language that has but two letters: is. Is.” Nothing less than this “is,” in the world and within the world, is at the core of her words. 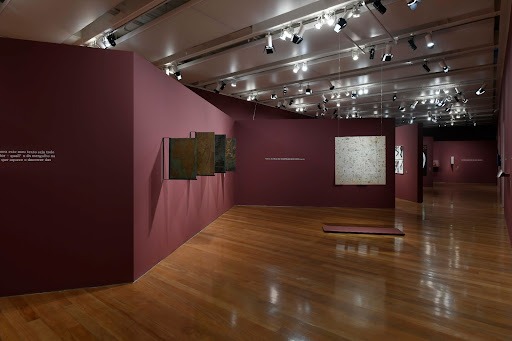 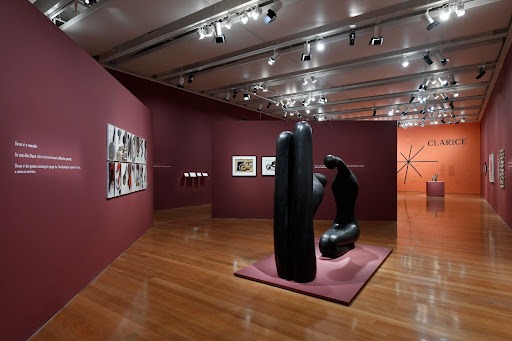 “It sparkles and is elastic. Like the gait of a glossy black panther that I saw and that walked softly, slowly and dangerously. But not caged – because I don’t want that.”, Lispector writes in Água Viva (p.21). The cage is a geometrical metaphor, and simultaneously figures as a representation of the framework, within which artistic articulation is situated. Many artworks in the exhibition question, extend, and perforate these frameworks, often with organic forms or performative means.

Lygia Clark’s famous cutting-performance “Caminhando” (1964) literally enacts the sculptural dimension of a simple piece of paper. In the exhibition catalogue, Clark’s “Caminhando” is trenchantly paired with Amelia Toledo’s “Plano Volume”, which dates as early as 1959. This is one of the great achievements of this exhibition: to put artistic positions in context with each other and assemble them in relation to Lispector’s literature.

Consequently, the constellation in this exhibition is – at the least – twofold. This folding and unfolding continues with Clark’s foldable sculptures from the 1960s, called “Bichos”. Their performativity evolves from a flatness that remains visible; they build up space from within flatness. While the “Bichos” create and fold up space, “Caixa trepante” (1965) unfolds the containments of space. The metal box is open on one side, from where an organic, helix-like structure emerges. “Caixa trepante” seems to enact a de-caging. We have Lispector’s “stray words” in our ears, “like the gait of a glossy panther.” Limits, the “cage,” and the “framework” are motifs that situate Lispector’s writings within the conceptual milieu of the Sixties.

But the figure of the “cage” also relates to the household and the realm of living. Lispector’s books often deal with mundane situations, many of them take place in a domestic setting. Eleonore Koch paints such domestic interiors in her careful compositions that might be described as naïve or poetically abstract. “Natureza-morta com bule de café e acucareiro” (1971) shows three objects – a cup, a coffeepot, a sugar bowl – on a brownish background. The objects lack almost any voluminosity. Simple forms on a monochrome background, caged by a neatline. Ione Saldanha’s “Fachadas” (1955) follow a similar line of narration: simple forms, compositions of monochrome rectangles, structured by strokes and thus evoking images of fire ladders and facades. Next to Saldanha, we encounter a hanging object by Mira Schor: on the white paper that circles around itself in the airconditioned exhibition space, we can read “Casa”. Rectangular forms resemble the plan of a house – and as the drawing turns around, we read its title “Casa,” mirrored.

The simplicity of everyday life cages the complexity of being. Again, we read Lispector: “But I don’t know how to capture what’s happening now except by living everything that happens to me here and now and whatever it may be. I let the free horse run fiery in its pure noble joy. I, who run nervously and only reality delimits me.” (Água Viva, Penguin Books, 2012, p. 64)

A brown horse enters the domestic scene in Wilma Martins’ “Cotidiano” (1972). Having Lispector’s description in mind, it seems the horse just returns from a fiery run, and it enters the drawing with gentle steps. The rest of the room remains black and white; the horse is the only color element on the white piece of paper. Martins made a whole series of painted animals situated in black-and-white interiors. In a constellation with Martins, we read Lispector: “Not having been born an animal is a secret nostalgia of mine. They sometimes clamor for many generations from afar and I can’t respond except by growing restless. It’s the call.” (Água Viva, Penguin Books, 2012, p. 45)

While the first floor begins with Lispector’s handwritings and manuscripts, the second floor opens with her paintings. Most of them are in rather small formats, about 30x40cm, and many of them are painted on plywood. Lispector painted extensively, she spread paint almost all over the surface. Remarkably, almost all her paintings contain a separate section in the lower right corner, reserved for the title, the date, and the signature of Clarice. Usually, she only writes her first name: The name that she changed a long time ago from Chaya to Clarice, and the name that also provides the exhibition’s title, quite fittingly: Constelação Clarice. On her paintings, Clarice is always written with a star instead of a simple dot above the i in her first name. The letter i is a typographical composition of two elements – a line and a dot. And semantically, it also introduces manifold meanings: I, after all, articulates subjectivity, the initiation of every personal narrative. Again, we read Lispector: “In the core where I am, in the core of the Is, I ask no questions. Because when it is – it is. I am only limited by my identity. I, elastic being and separated from other bodies.” (Água Viva, Penguin Books, 2012, p. 21)

“Elastic being” echoes in Claudia Andujar’s series of photographs A Sônia (1971). Two bodies visually become each other through the photographic techniques of multi-exposure, while both bodies stay visible separately. We see two female bodies that are literally entangled, positioned into each other. Espectro (1972) by Iole de Freitas depicts the shadows of bodies and body parts, while the sculpture Mulher Mutante (1968/2019) by Regina Vater, in the very center of the exhibition space, arranges the human body parts in slices. (Fig. 7) On the first glimpse Mulher Mutante looks like a body lying backward on the floor, with both legs pointing up. Freshly shaved legs, I am tempted to say, as their position resembles the famous shaving advertisement. But upon coming closer, it appears that these are body parts and abstract forms, stored one after the other in a box, like archived documents in an archival file. Probably, the body parts could be swung out and broken free. The initiation of movement is at stake. Still, we hear Lispector: “I let the free horse run fiery in its pure noble joy. I, who run nervously and only reality delimits me.” (Água Viva, Penguin Books, 2012, p. 64) 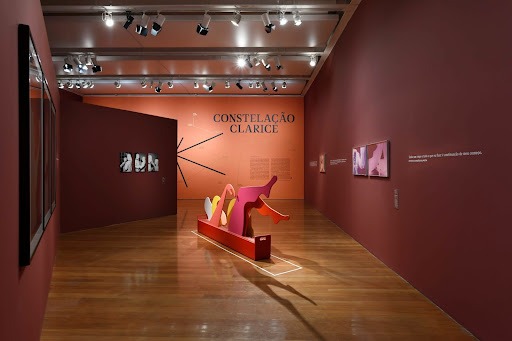 As an art historian, I have been more than pleasantly surprised about the conceptual aesthetics in Constelação Clarice, which broadens the art historical canon on conceptual art. In my suitcase of art-historical knowledge, I take home some eggs from art and literature: The egg is a recurring motive in Lispector’s writing, which I have also encountered in the exhibition space. (Fig. 8) Celeida Tostes’ undated series Ovos and Ninhos include eggs and their wrappings, from nests to boxes and cartons. The pile of egg cartons, packed with eggs made of clay, literally depicts the complex relation of geometry and organic forms. When, where, and how to begin? In “The Egg and The Chicken” , which Lispector announced to be one of her most intriguing and, even for herself, enigmatic short stories, she writes: “You are perfect, egg. You are white. – To you I dedicate the beginning.” 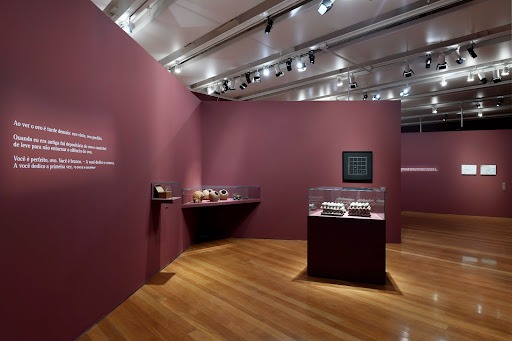 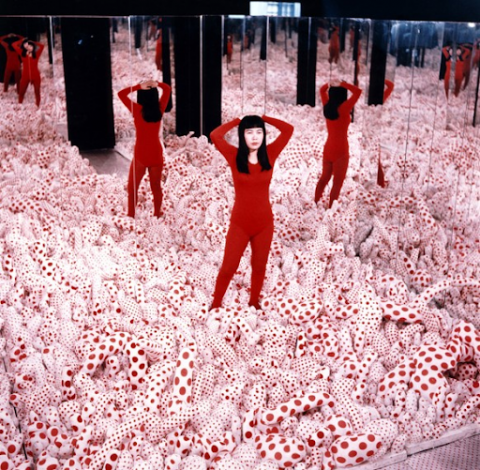