In 2017, Zehra Doğan was sentenced to two years and 10 months in prison for “terrorist propaganda and inciting hatred.” An artist and journalist, it was Doğan’s painting of the city of Nusaybin in ruins, adorned by Turkish flags, that led to her arrest. Charlotte Bleicher writes about the artist’s prison works, Hidden Drawings, which have been introduced to the public in the last Berlin Biennial. 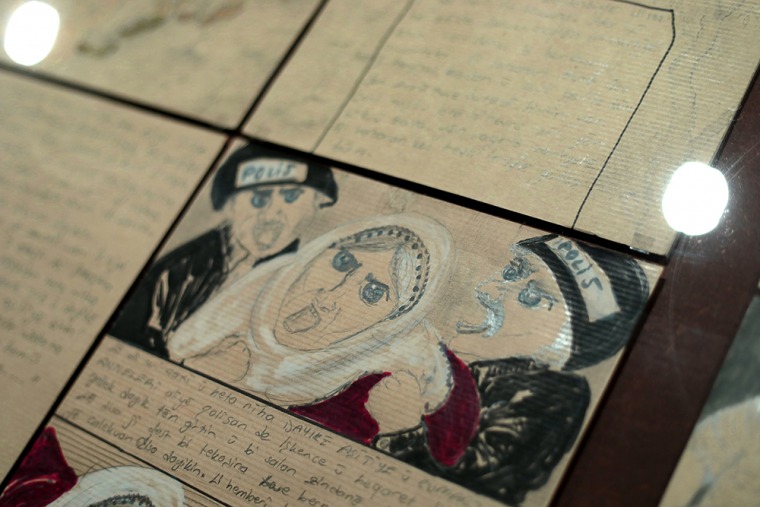 dengbêj is a Kurdish term composed of the words deng (voice) and bêj (present tense of gotin, to tell). The dengbêj is an oral storytelling tradition of the Kurdish people, used to pass on narratives in their suppressed language from generation to generation.1 The work Xêzên Dizî (The Hidden Drawings) by Zehra Doğan is a physical result of the artist’s own endeavor to pass on a narrative, one that tells her own and others’ stories of imprisonment as well as the ongoing reality of the persecution of the Kurdish people. 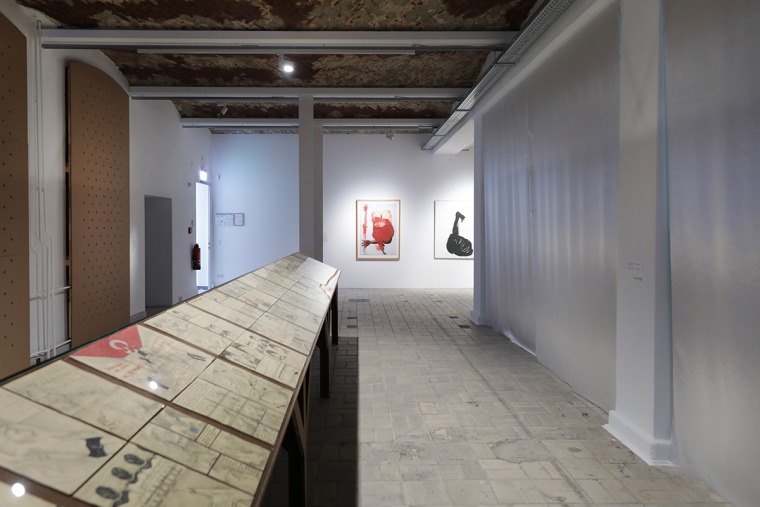 Zehra Doğan is a Kurdish artist, author and activist from Diyarbakır in Turkey, now living in London. Doğan’s work as a journalist has led her to the city of Nusaybin, in the Kurdish region of southeast Turkey, which in 2016 was under curfew due to conflict between the Turkish army and the Kurdistan Workers’ Party (PKK). It was Doğan’s painted depiction of this city, in its destroyed state, adorned with Turkish flags, that had led to her arrest. The painting was based on a photograph she had seen on the internet, shared by pro-Turkish accounts claiming victory in the conflict.2 After an initial pre-trial detention of five months, she was released under judicial control, only to be sentenced later to two years and 10 months at Amed prison, for ‘terrorist propaganda and inciting hatred.’3 It was during this second imprisonment that she began to work on Xêzên Dizî (The Hidden Drawings).

In last year’s Berlin Biennale at KW Institute, the work was presented to the public for the first time. The wall text that had accompanied the work pointed out that the Turkish tanks present in Nusaybin were German-made. German policies towards the Turkish invasion of Kurdish areas in northeast Syria, and their extensive sales of arms to Turkey, have come under much scrutiny in the past year.4 In October 2019, artist Hito Steyerl, along with theater artist Anina Jendreyko, filmmaker and musician Heja Netirk, and political scientist Bilgin Ayata, presented a performance titled Women for Rojava that highlighted the issues faced by the Kurdish community in Kurdish regions of Turkey and Syria, as well as the Kurdish refugees now in Germany. The performance included Steyerl, demanding that state-run German art institutions stop showing her work until the government’s policies towards the situation are changed. In the piece Netirk, who is playing herself as a Kurdish refugee, says to Steyerll, who is playing Florian, a member of Chancellor Angela Merkel’s Christian Democratic Union (CDU) party:

“If you weren’t afraid that people like me come here, [Recep Tayyip] Erdoğan wouldn’t feel so relaxed throwing people in prison.”

The work Xêzên Dizî (The Hidden Drawings) is made up of a total of 103 brown paper pages each filled with charcoal and colored pencil drawings accompanied by text in Kurdish. The circumstance of the piece’s creation, as well as its narrative nature across several a4 pages are reminiscent of Charlotte Salomon’s work ‘Leben? oder Theatre?’5 Whilst throughout Salomon’s work the viewer is taken through a story that combines the potential of a young girl’s imagination with the ghastly reality of the Nazi regime, when reading Doğan’s story there is no space given to fiction. Both women’s creative persistence resulted in artworks that not only defied the odds of survival but which themselves become testimonies to their independent experiences of deep and dark injustices. 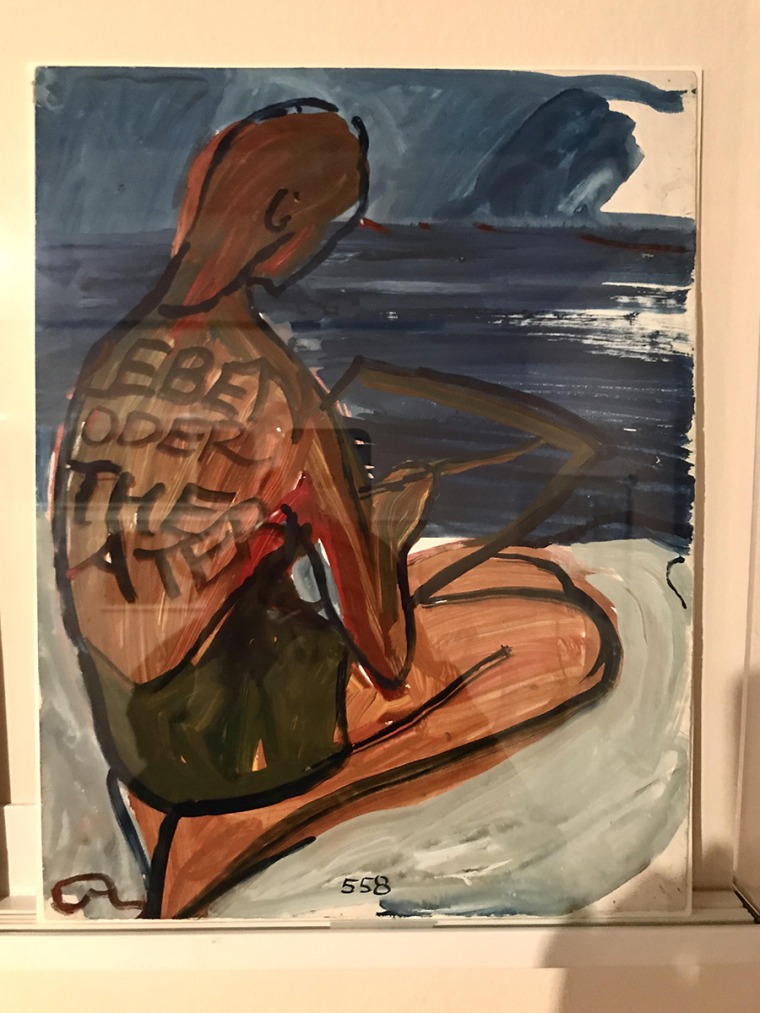 Whilst Salomon had to hide her immense production from the Nazi regime, Doğan also had to hide her work from the prison guards. Doğan explains the ‘hidden’ element of the work on the first page of text that accompanies a charcoal drawing of herself hunched over a piece of paper:

‘Here, drawing is forbidden, but I found a way round this: my friend Naz Oke sends me letters and leaves the other side of the paper blank. Every night, I secretly draw on that back page and then send the pages back out, again secretly. I hope these drawings will reach you.’ 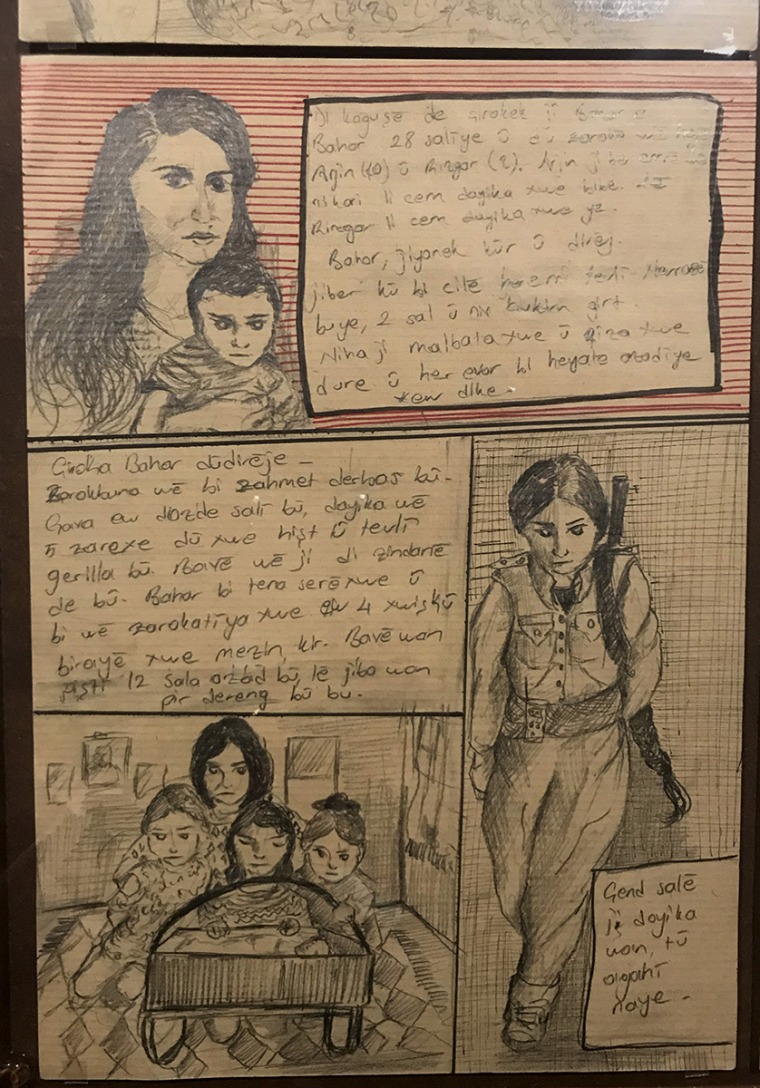 The series begins with Doğan’s entry into the prison and a relaying of the incident that led to her arrest. The last page of the work presents her release - ‘I felt like a bird with broken wings. You are in limbo - neither free, nor a prisoner’. The pages that sit between these two events are not specifically timestamped, with their content oscillating between accounts of her routines and observations in prison, stories of her inmates and past prisoners, and the struggles that give a deeper insight into the long fight faced by the Kurdish community. Xêzên Dizî (The Hidden Drawings) is at once an artwork, a diary, a history book, a journalistic endeavor, and a piece of evidence.

The text accompanying Doğan’s work at the Berlin Biennale categorizes the work as a graphic novel, however, here graphic also takes on its alternative meaning. Between heartening scenes of Doğan and her inmates performing daily life acts as a unit, there are drawings of bound bodies awaiting torture or a scene where a body has once been, instead showing only remnants of blood. The sentences that accompany all of the graphics are written simply, yet are rich with detail including names and numbers. Journeying through the work, one often finds oneself asking, leben oder theatre? life or theatre? Although perhaps categorized as a novel, there is nothing fictitious about this work’s content.

Before Doğan was imprisoned, she had founded with five other women, the news agency JINHA. The online-based news channel had an all-female staff covering specifically daily news related to women. In an interview, one of the founders cited as one reason for creating JINHA the need for an alternative to the widespread conditioning of women across the region.6 In July of 2020, a social-media campaign saw women engaging in the #blackandwhitechallenge, which was said to have started to ignite awareness and show solidarity for the ongoing femicide taking place in Turkey.7 Social media campaigns aside, it is clear that today the situation for women in Turkey has not improved. Therefore, it is somewhat unsurprising that towards the end of 2016, shortly after Dogan’s initial arrest, JINHA was closed down and banned by the Turkish authorities.8 At the start of this year, however, the agency managed to re-open, renaming itself Nu JINHA, Nu in Kurdish meaning new.9 The agency now has a new start in sharing the stories of women, whose struggles have only continued and deepened.

Women are given a key voice on Doğan’s pages. Early on, when referring to the response of the Kurdish people following a series of attacks in 2015, she stated: ‘Women took a leading role in this resistance,’ and later added, ‘In this war, it is the mothers who have suffered most.’ Across the pages, she introduces us to some of the characters she has been living within her cell whom she consistently calls her Comrades. With the intensity of each woman’s devastating story, there are scenes that capture the strong sense of community amongst them all - images of the women reciting poetry to each other, taking turns caring for the sick, or making toys for the baby of one of the women, who is living in the cell with them. ‘In the most difficult situations, women are always able to make the best out of it’, she writes.

There is a sense of hope, strength, and resilience that accompanies the simultaneous stories of torture, rape, and death. The creation of Xêzên Dizî itself is an act of defiance. The work’s existence is a guarantee that the stories will be passed on and the people’s will to resist will be preserved. After Doğan’s release from prison she has had to leave Turkey, and now resides in London. Although now she cannot be a physical body on her native soil, her artwork has become her means of resistance from afar. 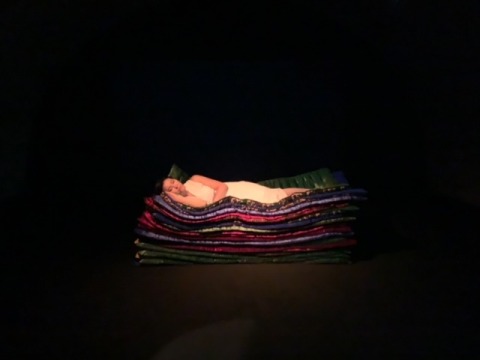 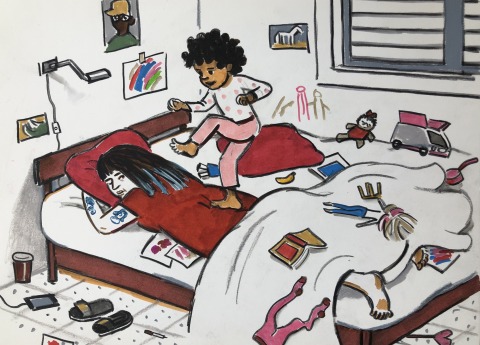