The Present in Drag and Drop: On the 9th Berlin Biennale

“Welcome to the post-contemporary,” say the DIS collective, curators of the 9th Berlin Biennale, with the hospitality of border control. Michal B. Ron shares her impressions of the biennial in a new critique for Tohu Magazine.

Writing in the personal is my attempt at resisting the messages that arise from the current Berlin Biennale. I write “I”, against that show, where the personal is reduced to the personalizable (as in “customizable sneakers” or “individuated diet regimes”), or turned pubic by the selfie.1 “It is the present that is unknowable […] – forged by a persistent commitment to a set of fictions,” proclaims the press release of DIS, the New York-based, collective (established in 2010) of Lauren Boyle, Solomon Chase, Marco Roso and David Toro, which was invited to curate the 9th Berlin Biennale. “Instead of unmasking the present, this is the Present in Drag” – DIS announces. Yet it is not “drag” that makes the present that DIS puts on display so foreign to me. “Welcome to the post-contemporary,” they say with the hospitality of border control, inviting us into an allegedly universal territory. “Howdy,” read no-entry signs that Adrian Piper (b. 1948) projects on locked doors, at the dead ends of darkened staircases. Her work Howdy #6 [Second Series] (2015) reappears in two different venues of the biennial. 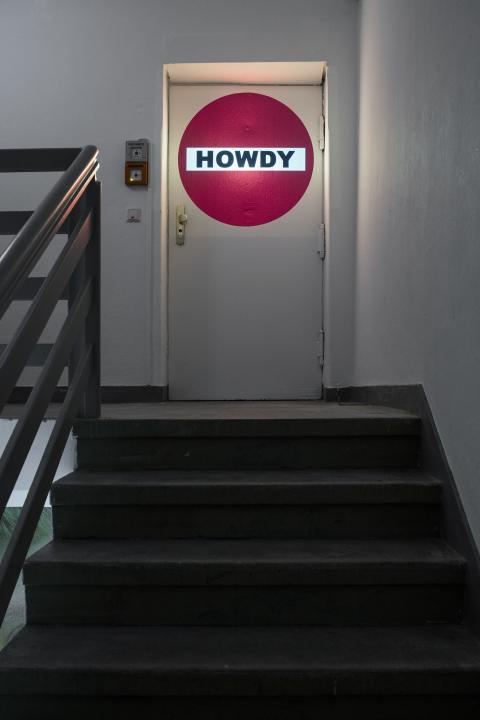 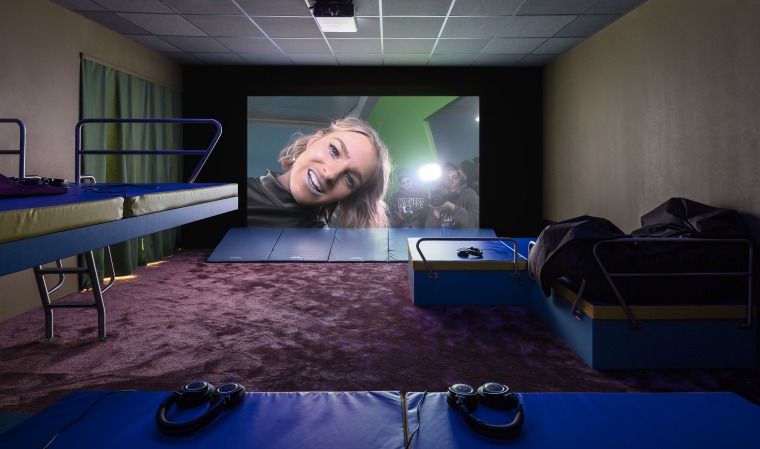 The prevailing atmosphere here enhances the upsetting realm that Lizzy Fitch/Ryan Trecartin (both b. 1981), who naturally take part in this show, create in their disturbing video installations:2 Their works feature protagonists who are turned virtual by glittery body colors and artificial contact lenses, and who constantly blabber in English, and perform exaggerated gestures, frontally, to the camera. They are shot in an American suburban setting, which extends from the screen into the space of the viewer, much like the entire biennial, which resembles an issue of DIS Magazine expanded from the surface of the digital display into the exhibition space.

This magazine, which the cooperative defines as a virtual platform for art, fashion, music, and culture, and also a functioning stock photography agency, is the major project that has granted DIS the prestigious invitation to curate this year’s exhibition. And so, this competent virtual self-articulation from America is superimposed on the city of Berlin (where every day you hear a bit more English, now that “the Americans are coming”).

In the Akademie der Künste, the biennial’s central venue, which resides at the touristic Pariser Platz, directly by Brandenburg Gate, you wander from one work to the next as if you were navigating the different contents on a Website. When strolling becomes scrolling, your whole bodily existence is reduced: you become your index finger, blind, and universal. I am indebted for this uneasy image to Simon Fujiwara (b. 1982), whose work The Happy Museum (2016) includes, next to other exhibits, a video in which a hand, cut from the body, is swiping the screen. Frankly, except for a few moments that raise some interest, this is all as boring as the Internet. As boring as art. Indeed, what a drag. Is this what DIS means by “the present in drag?”

The Berlin Biennale DIS has created is admirably consistent with dis-exciting aesthetics. The Website, posters, and brochures all exhibit a neutral design in blue and white, with a clear sans-serif font and pictures of clean-cut people with Asian features and empty expressions, a marketing aesthetic shared by corporations such as Deutsche Bank and Techniker Krankenkasse, one of Germany’s largest public health insurance companies, and, of course, Facebook. These are the products of the “Not in the Berlin Biennale” – the communication and marketing campaign for the Berlin Biennale. And like these brochures, in which racial features are a matter of design, the exhibition contains no people, only images of people: mannequins, which Anna Uddenberg (b. 1982) sexualizes and hybridizes with trolleys and backpacks in Transit Mode – Abenteuer (2014-2016), for example. 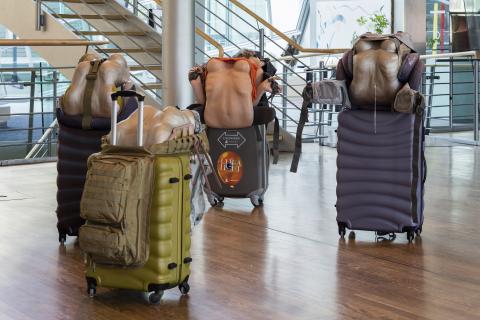 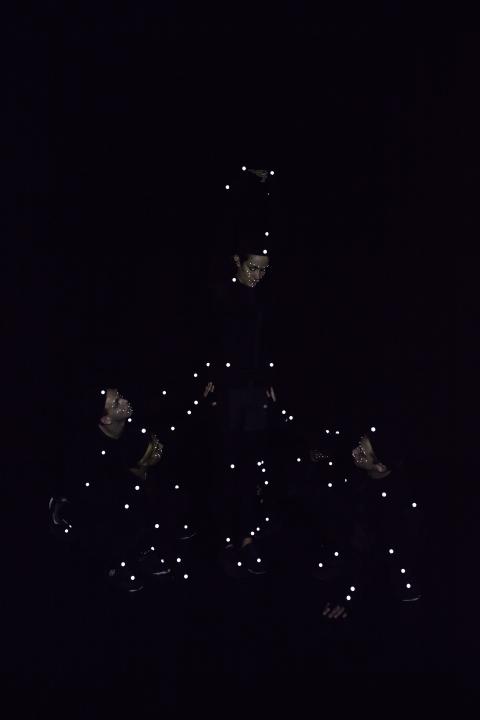 When you finally encounter a real, breathing human, s/he mimics a virtual one. In Alexandra Pirici’s (b. 1982) performance Signals (2016), a group of performers in a dark room, who wear black motion-capture suits with white reflectors, act out popular images and videos turned viral from the Internet, staging  “death by selfie,” or “Tatlin’s Tower,” as in a game of charades.3 Or, in another case, Fujiwara’s The Happy Museum again, it is an almost naked performer, whom body makeup transforms into a mannequin in Chippendale-like police officer uniform. The few animals here and there are also animated. Only the plants that atelier le balto (founded in 2001) has put in their Passage (2016) at the courtyard of the KW Institute for Contemporary Art, the mother institute of the Berlin Biennale, are real. A short relief, before entering the world of virtual reality that awaits inside. 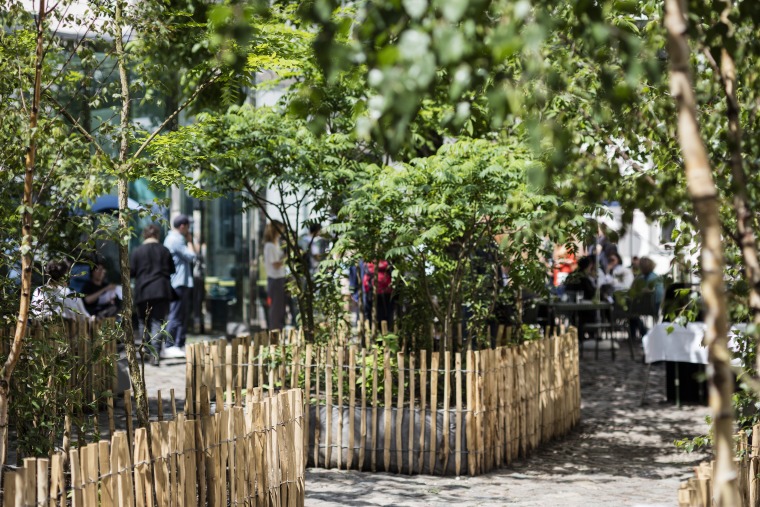 Unfortunately, I don’t see the “drag” in this show, I see only the present. A present that articulates itself in high definition and low hesitation, it seems strangely old. Isn’t it a bit like that 18th century fashion of white powdered wigs, worn in order to gain the respect of age? Or was that too a past present in drag? I’m thinking of the white wig that adorned Mozart, who died at 35, as young as most of this show’s prodigies. But drag could be much more political and radical than that. Beatriz Preciado wrote about drag as a practice of self-politicizing in Testo Junkie (2008), a mind-blowing critique that intensely described our “pharmacopornographic era.”4 Preciado’s account of the present is corporeal, it deals with each one’s potential to ejaculate or stimulate ejaculation, and the drugs that regulate sexuality within a monitoring administration. Here, on the other hand, in DIS’s present, “drag” seems more like the right fashionable term to wear to this hype-filled show. 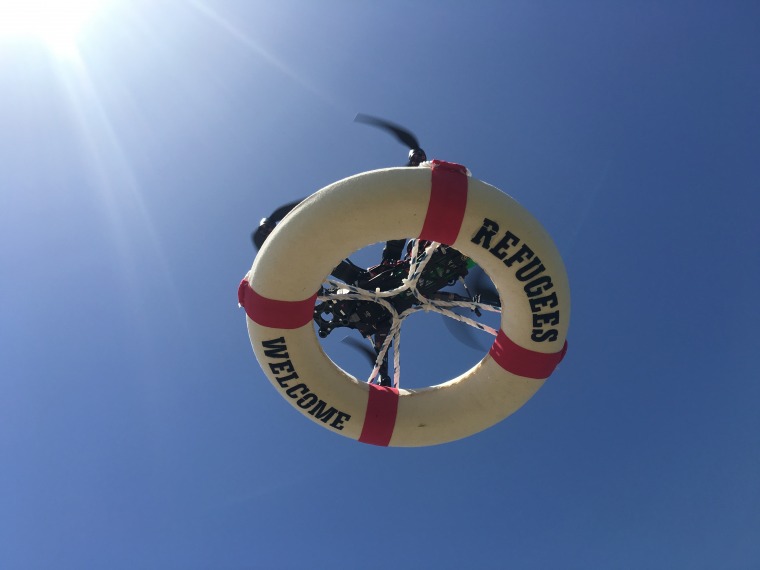 In the spirit of this present, which I have toured so closely in this biennial, allow me to conclude with the moments I “liked” (to use some social media terminology that seems more than fitting here): Hito Steyerl (b. 1966), whose sense of humor, which I’ve always adored, was truly refreshing within all this pompousness. Here she shows a video about a drone, that uninhabited high-tech war toy, which she treats a bit like a stubborn pet; and again Fujiwara’s The Happy Museum, where seeing a pile of Angela Merkel’s pinkish high-definition makeup powder is a rather concrete materialization of world power.

The moment I would have enthusiastically “shared” is Halil Altindere’s (b. 1971) video clip Homeland (2016), to the rap of Mohammad Abu Hajar. The Syrian rapper raps in Arabic about the forced immigration from Syria, in a video that combines found footage and fiction. At its peak, a train, so full that passengers sit on its roof, enters Berlin’s iconic central station, thanks to the magic of digital after-effects. To me, the present presented here feels urgently real.

The 9th Berlin Biennale is open from 4. June through 18. September in five venues in Berlin, including a tourist boat. It is also happening online, and you can discover more under “Fear of Content.” 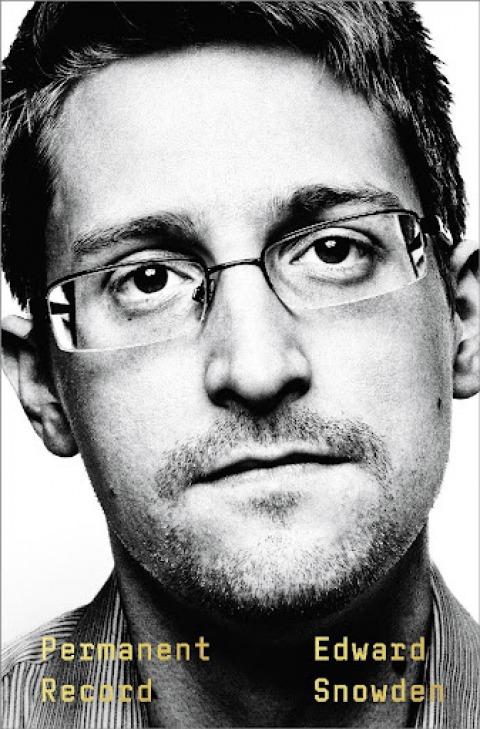