No Tricks, No Scams. Marcel Broodthaers at the Fridericianum, Kassel

Did this year’s posthumous attempts at exhibiting Marcel Broodthaers's work rise to the challenge? Would his future retrospective at MoMA? Michal B. Ron is tackling these questions and their inherent paradox.

“Nouveaux trucs, nouvelles combines” – new tricks, new scams – this sentence resonates as a motto throughout the artistic production of Marcel Broodthaers (1924-1976), the poet who became an artist at age forty and, four years later, the director of a fictive museum he had opened at his home in Brussels, carrying the curious title Musée d’Art Moderne, Département des Aigles (Museum of Modern Art, Department of Eagles, 1968-1972). Founding a fictive museum and expanding it, section by section, for four further years, crowned Broodthaers as father figure of “institutional critique”, a term reserved for artistic practices that expose the historical, political, social, and economic conditions under which art operates1. But, as serious as that may sound, “new tricks, new scams” seems to better summarize Broodthaers's career, as the sentence repeatedly appears in the two-volume catalogue he had produced for his last self-curated retrospective, L’Angelus de Daumier (The Angelus of Daumier, 1975). Forty years later, attempts to reconstruct Broodthaers's oeuvre in posthumous exhibitions are destined to fall into a trap: what would be a faithful re-presentation of tricks and scams? A paradox. 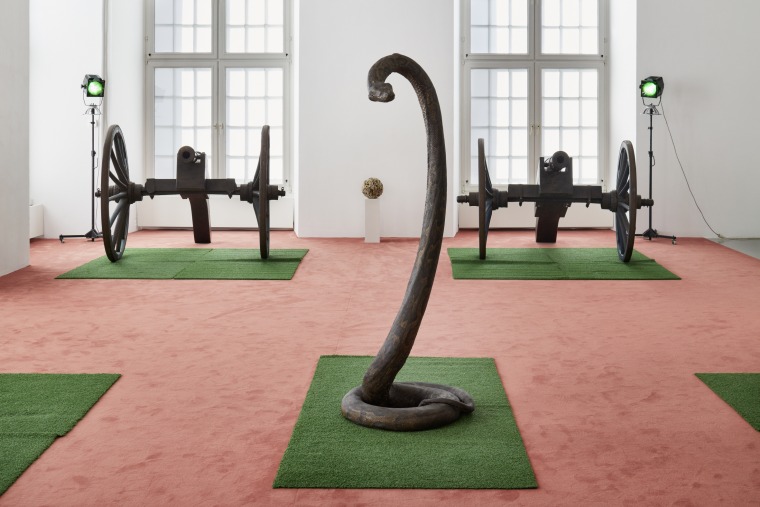 This year has seen several exhibitions which were devoted to the artist’s oeuvre, facing this very challenge. Setting aside timely displays of private collections that showed personal choices of patrons (such as the one which took place at the Herbert Foundation, Gent), or the emergence of a single work in the service of a curator’s statement (as in the case of Okwui Enwezor’s exhibition at the Giardini Central Pavilion, in this year’s Venice Biennial), we may be able to distinguish two curatorial approaches to the task: one collects a list of artworks into a factual catalog of objects unfolding in space, while the other attempt an unavoidably fictive re-collection, through reconstructions of condensed constellations of works which have been absent since their making in the 1960s and 1970s.2

Broodthaers's exhibition at the Monnaie de Paris this year manifested the latter attitude. Working in close collaboration with Maria Gilissen Broodthaers, the artist’s widow, the curator Chiara Parisi attentively addressed the specter of Broodthaers, whose self-curated exhibitions, and retrospectives in particular, were always more about constellations than about auratic objects of art. The exhibition at the Fridericianum in Kassel, however, belonged to the objective, factual kind. Curated by Susanne Pfeffer, it was a large-scale museum exhibition, playing safe, if at all playing. No tricks, no scams. 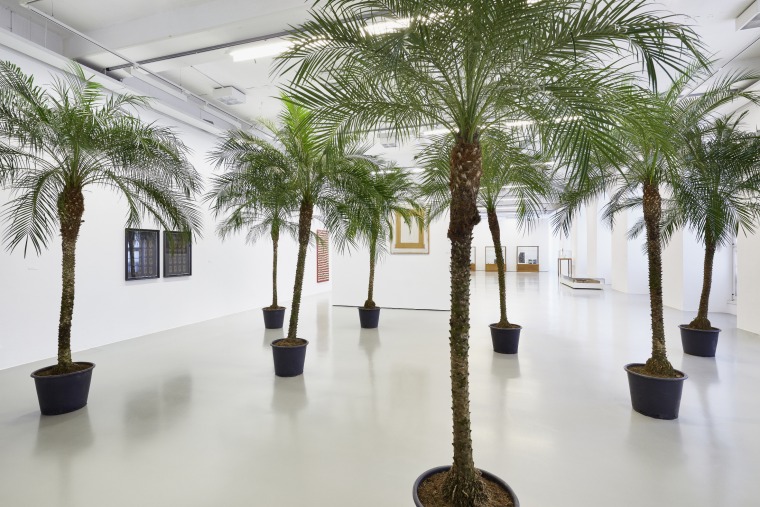 The Fridericianum exhibition began with L’Entrée de l’Exposition (The Entrance to the Exhibition, 1974), welcoming the visitors with potted palm trees3. The vegetation’s conquest of the entrance to the exhibition had the potential of subversively transforming the elevated cultural space into a tamed semi-tropical winter garden. Unfortunately, inside the Fridericianum, the gesture has been rendered decorative. Perhaps the large white-cube rooms of the museum thwarted the constellation. Well-distanced objects were scattered all over these rooms. The objective, sterile presentation in Marcel Broodthaers stood somewhat estranged from the whimsical insincerity of M.B., who confessed, in the invitation to his first solo show in 1964, that he had begun producing objects since he, too, had wondered whether he “could not sell something and succeed in life.” Sadly, this invitation was not included in this show, which lacked other key works that could have completed the overview of Broodthaers's oeuvre, and further attest to the criticality of the objects being shown. 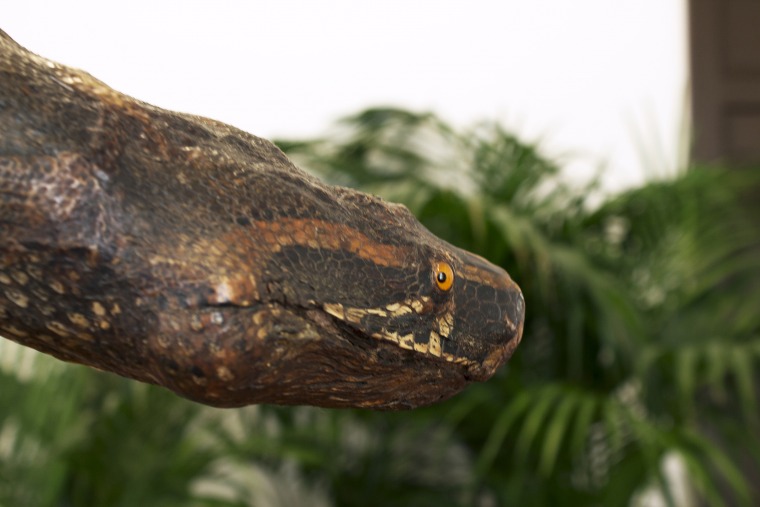 Closer re-installations of Broodthaers's environments have offered stronger moments, stirring up a taste for more. The re-installation of the Section Publicité (Section of Publicity, 1972), a cabinet over-populated with images of eagles, accurately follows instructions. It was the closing section of Broodthaers's museum – the celebrated Musée d’Art Moderne, Département des Aigles – and the artist originally produced it for the influential Documenta V (1972)4.

This year’s re-installation is the third in line in Kassel, the second being the 1997 re-installation in Documenta X (1997). Kassel’s celebrations of “60 years of Documenta” could have served as an invaluable opportunity to reconstruct more of the works Broodthaers had produced for Documenta V, such as the wall inscriptions and floor piece that comprised the Musée d’Art Moderne, Département des Aigles, Section d’Art Moderne (Museum of Modern Art, Department of Eagles, Section of Modern Art), which the artist had contrarily changed in the middle of the show into Musée d’Art Ancien, Département des Aigles, Galérie du XXème Siècle (Museum of Ancient Art, Department of Eagles, Gallery of the 20th Century). Moreover, repositioning works which have previously been shown in other Documenta editions beyond Broodthaers lifetime, would have added another layer to the historical perspective. For example, a re-installation of Décor. A Conquest by Marcel Broodthaers (1975) in the Fridericianum’s rotunda, where it stood during Documenta VII (1982), would have evoked the work’s previous post-incarnation, in an in-situ re-reconstruction.

DÉCOR, A Conquest by Marcel Broodthaers, 1975 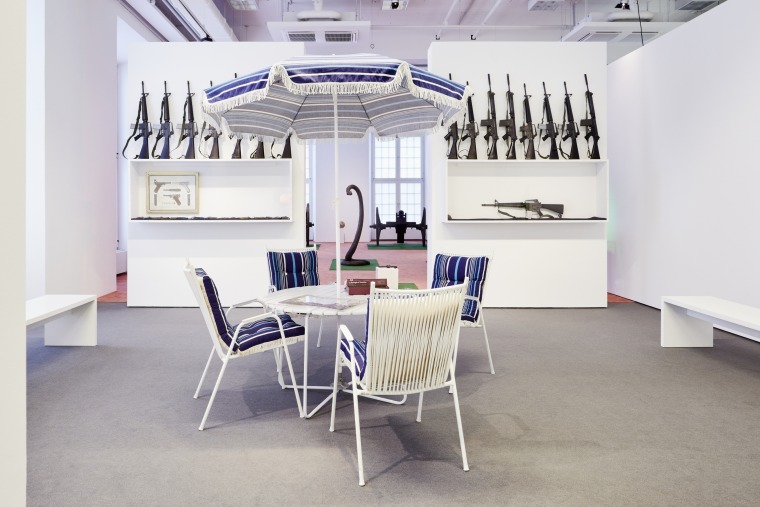 Admittedly, Décor – A Conquest in its new installation is still a very effective manifestation. It stages a “XX century room” with rifles, pistols and garden furniture, followed by a “XIX century room” containing cannons and antique chairs. Wandering through lighting equipment, the visitor felt herself inhabiting a historical movie set. Broodthaers clearly demonstrated that we, the visitors who have ostensibly come from the future, from a “XXI century room” of arms industry and IKEA solutions, still dwell in that movie, in that history. In this act a pistol has been hung on the wall; it might have finally fired in the following one. 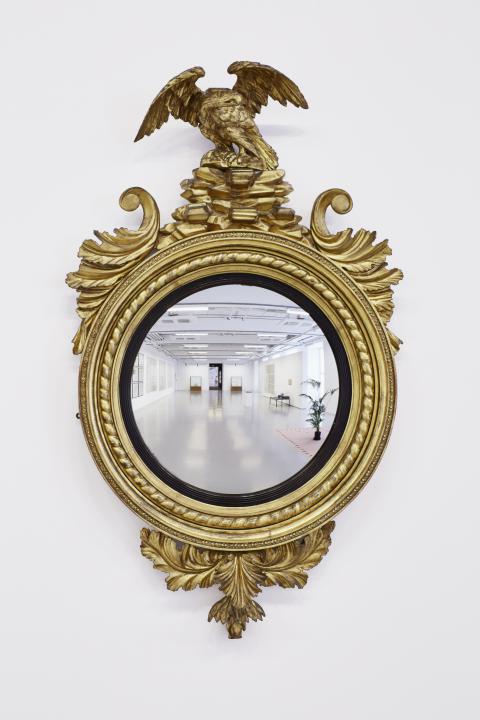 And next comes MoMA. Broodthaers's upcoming exhibition there, following MoMA’s acquisition of the Daled collection, may bear again the signature of the collector’s choice5. What kind of a show are we to expect, when THE Museum of Modern Art presents the Musée d’Art Moderne, a museum that has originated in Brussels, where such an institute does not exist, even today? Nouveaux trucs, nouvelles combines. 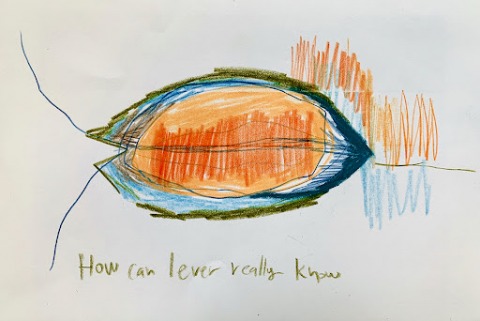 What to do for the Sake of Love? 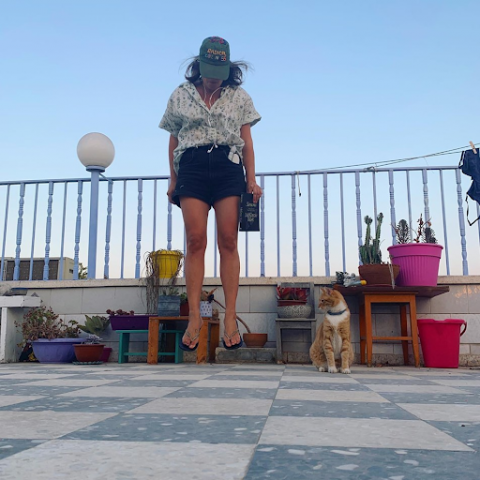