Hagai Ulrich on the homonyms in Yossi Breger's last show, on the relations between single words and the continuum, and on the idea of the abstract whole.

In the week following Yossi Breger's death, I went to see "the Guide for the Perplexed: Homonyms," his show at Dvir Gallery, where he placed 18 words on the walls: figure, image, woman, throne, sat, rose, stood, approached, touched, full, passed, foot, sadness, face, wind, eye, yud-he-vav-he, Sabbath. The homonyms – Hebrew words that repeatedly occur in the Bible, with various meanings – are written in white, each set in a black square framed in white. They were taken from the first part of Maimonides's "The Guide for the Perplexed", all words that hold more than one lexical indication or meaning,1 and, according to Maimonides, they should not be read literally. They are keys to understanding or experiencing an "abstract whole," and thus getting closer to the divinity. 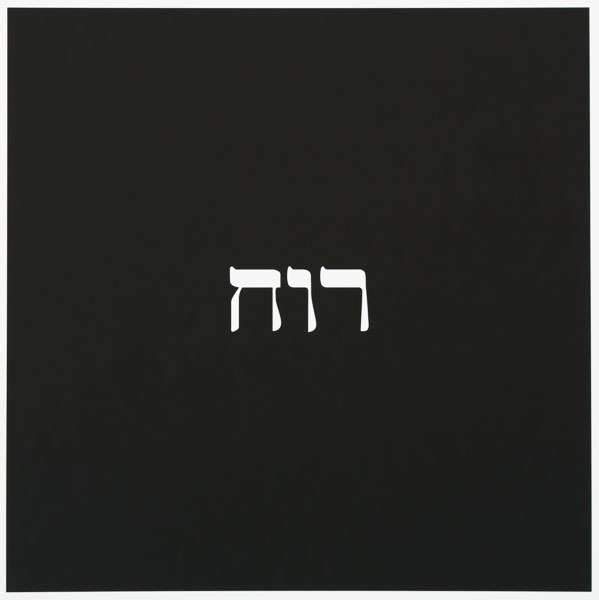 Maimonides's "abstract whole" describes a way of knowing God by the subject. According to him, knowledge of God is abstract, and cannot be conceptualized through words. He, therefore, sought to clear the everyday language of superfluous concepts that might be misleading regarding the divinity. Instead, he recommended trying to achieve comprehension of the divinity as an abstract whole through the homonyms. The show's title, "a Guide to the Perplexed: Homonyms," places the words in an abstract construction, with no conjunctions or adjectives to turn them into a sentence. This construction obliges us to fill the gaps between the words with their secondary meanings – their connotations – everything the words convey beyond their basic meaning (their denotation).

This choice speaks to the artistic approach Breger has chosen to investigate, understand, and produce 'abstract whole' insights about reality. For Breger, the medium of photography inherently contains a dimension of abstraction.  Both the act of photography and the viewing of the photograph create a "space-time point of dissociation on the continuum that exists outside of it,"2 isolating the photographed object from its immediate context and creating a certain abstraction. The point of dissociation in the production of the photograph enables an examination of both the detail and the continuum from which it has been taken.3 That is to say, exposing the details tells us about our perception of reality, but also highlights the photographer's specific point of view.

In his shows, Breger used to exhibit photographs of objects or sites that were often dissociated from their local, temporal, and cultural contexts – contexts that he called "folklore."4 In this way, he emphasized the structural and disrupted the textual continuity that enfolded the construction. He did this to achieve something that was beyond "the drama of 'the person in the space of things'."5 Breger was interested in the mode and the structure of the thing, its abstract whole, which is invisible within the quotidian and the continuity. 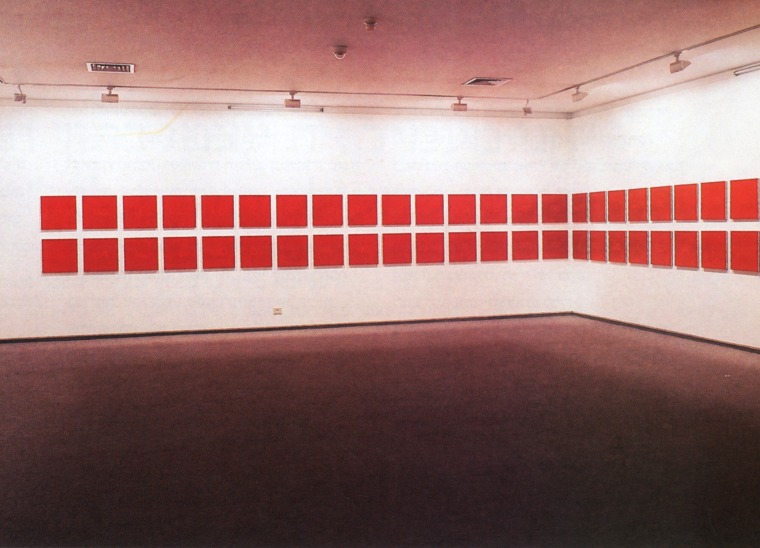 In its structure, "a Guide for the Perplexed: Homonyms" recalls Breger's 1996 show at the Tel Aviv Museum, on the occasion of his being awarded the Gottesdiener Prize. There he exhibited a series of paintings in which each word was framed individually on a red square background. Displaying the words together suggested a certain syntactical configuration. In a conversation with Tamar Getter Breger equated the word and the photograph as means for capturing reality:

For me the text is like a screen, a piece of fabric. It is like hanging a curtain. The text as object is a kind of (…) a comprehended screen (…). The world does not explain itself; it needs explaining. Language is the tool for explaining. It wants to clarify the world, to wrap and seal it within a transparent cover. Photography emphasizes that. I want to look at the cover; to be aware of the screen that language creates. The camera helps me because it is mechanical, non-personal, neutral; it copies what it does not see. When you talk about a screen, you cannot show the thing itself.6

When words participate in a sentence a textile is created, the 'screen that language makes.' The textile, the syntax, obscures the foundations of the text – subject, object, adjective – as unique expressions (an object, and image, or a word), apart from the context. At the same time, the text hides the universal, common, whole, and abstract structure at the foundation of things. 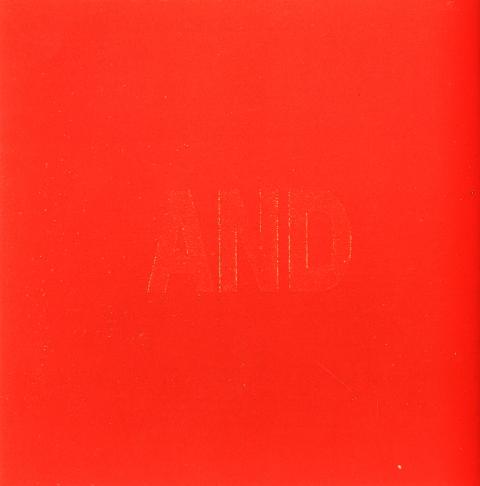 When Breger focuses on the foundations, which reveal the structure, the textual continuity is exposed as a mechanism of obfuscation and misdirection, preventing things from appearing as they are. This is an oxymoron, something that Breger has always been attracted to.7 The show at Dvir Gallery carries on a long-term artistic process that deals with the perception of reality, on the improbability of that perception, and on the intention to perceive it by breaking the "purportedly harmonic order of things and their meaning."8 The visitor wanders through the show from one word to another, from a single detail to the next one, bridging the gaps subjectively and connotatively. He must reduce the meanings of the words because of that 'inclination to complete,' an inclination that will encounter many obstacles in the creation of the context, but will lead the viewer to a more comprehensive, open structure.

Perhaps under the influence of Samuel Beckett, whom he often quotes, Breger does not tell stories. He indicates common activities, points to what we are doing here – the way we move from one thing to another, from one space to the next, how we sit down and get up, approach something, touch it, drink our fill of it, and move on to the next thing. He talks about the actions themselves, disconnected from space, time, and context, as life actions that, devoid of their 'syntax' – their functions as subject and object – are meaningless. And yet, the disconnection seems to reveal their common pattern.

This common pattern underlines a formal dimension where the content is connotative and the syntax nonexistent. The focus is on form, which is at the service of the content. Breger uses Beckett's formal approach to indicate actions that signal Man's place in the world. In a way, Beckett's – and Breger's – economy resembles Maimonides's elimination of adjectives, in the sense that every added detail related to the divinity might mislead us regarding its existence. 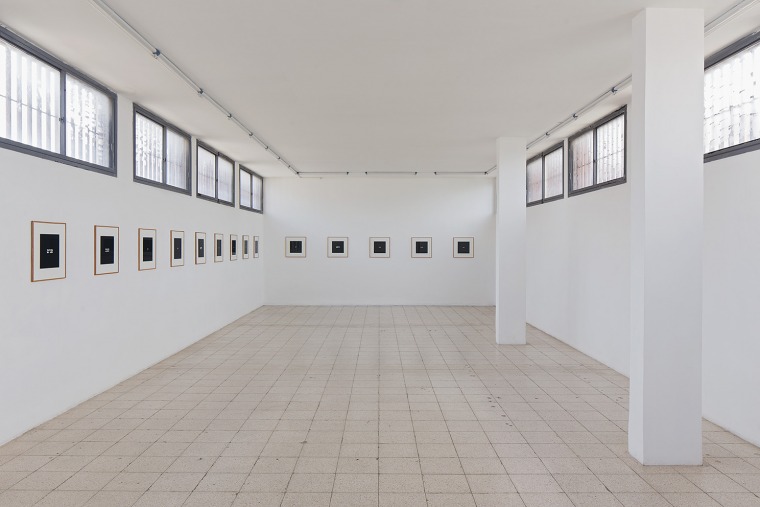 Among other things, Breger has borrowed from Beckett the use of gaps and the manipulation of the inclination to complete patterns, in a way that reveals a more abstract, more essential structure while undercutting and questioning it. Beckett's indication is similar to the economy and the elimination of adjectives in the show, which seeks to rid the language of everything but its main abstract essence.

Yossi Breger used to leave his viewers with gaps. That was his artistic position, which did not impose his assumptions on reality and stopped the viewer from doing the same: "The state of investigation belongs to him who doesn't know and wishes to know," he has said. "First of all, I do not know – and now let's investigate what this is. And we can do it with morals and integrity."9

Yossi Breger's show, "a Guide for the Perplexed: Homonyms" was exhibited at Dvir Gallery from May 14 through July 16, 2016.

For further reading on Yossi Breger's show, see the article by Merhav Yeshoron,"A Guide for the Perplexed," also published in Tohu Magazine.