Crop Marks, Sharif Waked’s latest work, is a life-size photographic self-portrait of the artist with his head cut off. Alma Mikulinsky writes about this beheading drama and tries to understand our fascination with images of head amputations, such as Henri Regnault’s painting of the brutal execution in Granada and Ned Stark’s decapitation in Game of Thrones.

Crop Marks, Sharif Waked’s latest work, was first exhibited in the artist’s one-man show in Ramallah’s Gallery One, in 2016. Like other works by the artist, Crop Marks is characterized by a commitment to addressing the political reality of the present, yet it never functions as mere visual propaganda or illustrations for contemporary events. Waked asks the viewers to re-examine their own biases, systems of beliefs, and automatic identifications. 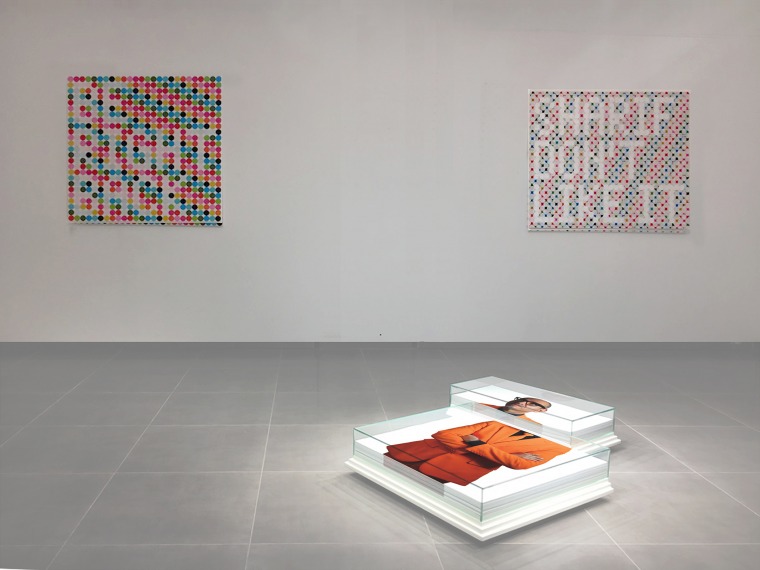 The work is a photographic self-portrait, showing the artist dressed in a flashy orange suit, wearing a worried expression as he looks sideways. The image is presented as a floor installation that is divided between two movable boxes. They are of the same width but of different lengths; the narrower box contains the artist’s head, while the second, longer container holds the image of his torso. The result is a life-size self-portrait, sprawled on the floor in two parts, an image that could theoretically be rearranged in different constellations - for example, one that forms a full body view, or another that separates the artist’s head from his torso the way the artist had imagined the exhibition of the piece. 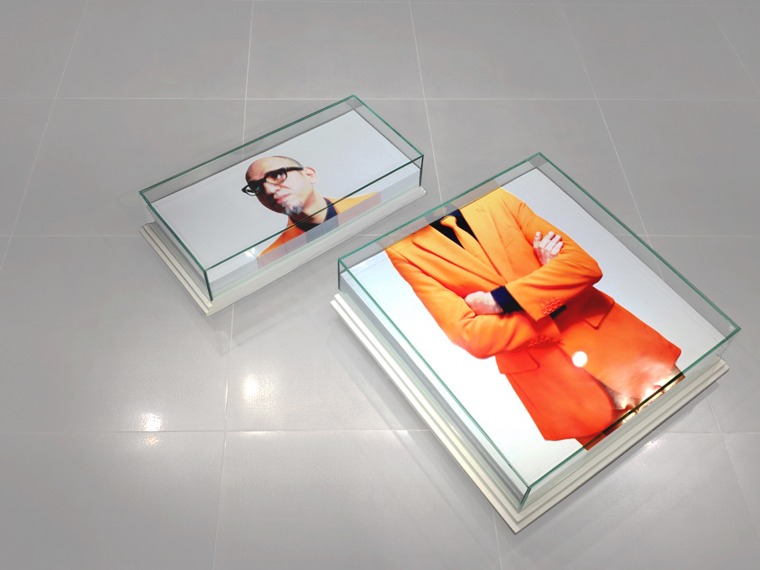 The title – Crop Marks – gives the work its witty, funny, yet grim tone. The term “crop marks” originates in the printing world, and specifically refers to the cross-shaped marks found on the edges of a print, where the image is said to “bleed,” and designate where it would be cut by a “guillotine.”

Waked does not remain in the abstract realm of the printing industry; he utilizes the associations that originate in the professional terminology and the piece’s two-part structure, as well as its subject matter and form, to create an image of the artist with his head cut off. The dry editing instructions that the term “crop marks” implies become literal as this image of the artist is divided precisely at the throat. The bleed suggested by the work’s title evokes a blood spatter that is not there, and the contemporary paper-cutting machine is replaced by the original guillotine, popular during the French Revolution for beheading as it offered an efficient method of execution. It resonates with the image of brutal contemporary executions by ISIS, which have been disseminated globally through traditional and social media, in videos that contributed to the group’s branding as ruthless fighters who disregard moral codes and international law. Even the outfit the artist wears contributes to this reading; the flashy orange suit the artist dons not only marks him as fashion-conscious but also carries associations to American prison garb, as well as ISIS captives.

As I look at Crop Marks, a different image appears in my mind’s eye, depicting a brutal execution in Granada, vividly brought to life by the 19th-century French painter Henri Regnault. In Exécution sans jugement sous les rois maures de Grenade, the low vantage point puts the action right at our eye-level, overpowered by the looming Moorish executioner, placing us directly in front of the contorted corpse, the decapitated head, and the realistic blood spatter achieved by a thick layer of vibrant red paint, which the painter had allowed to drip so as to imitate the flow and texture of blood. But let’s not point a finger at the Orientalist tradition and categorize its fascination with North African and Middle Eastern violence as crude and politically incorrect, and remember our own terrified enjoyment upon seeing Ned Stark’s decapitation in Game of Thrones. 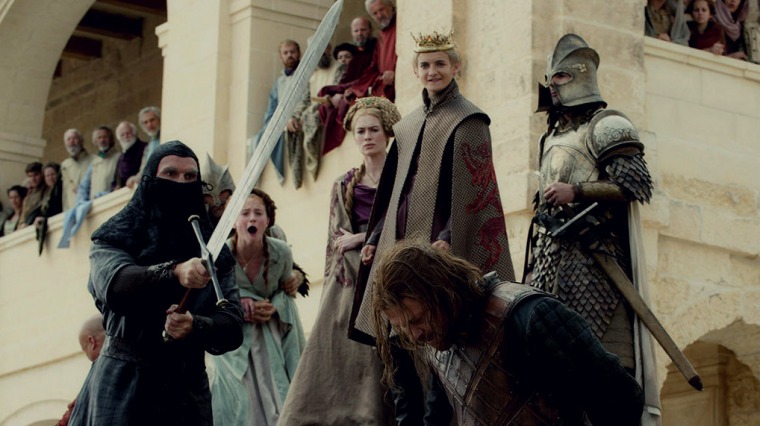 The copyright of which is held by HBO*

In Crop Mark there is no blood in sight, but nevertheless we are implicated in the depicted activity and not merely as bystanders/art viewers. By choosing to position the work on the floor, Waked activates the space in a way that traditionally-hung images rarely do - not even the most vivid and realistic French Salon paintings. The traditional role of floor pieces - assigned to the medium by Minimalist artists - was to enhance the viewers’ physicality, and it still continues today with the all-too-popular immersive installations, which work the space to take the viewer away from the physical reality of his or her body to an alternative environment. Waked is working in parallel to this tradition when he installs directly on the floor a two-dimensional non-immersive photographic work that has been intended for the wall. This gives the self-portrait its meaning, as the placement conveys both narrative and ethical implications. On the one hand, as opposed to an erect, vertical image, the self-portrait is read as an image of a wounded body or a corpse. On the other hand, thanks to the wheels under the boxes, the image can potentially be moved and reorganized to create a temporal narrative of before and after; the wheels introduce temporality into this installation, as if we are watching the dire consequences of a filmed beheading and then rewind it back, either to undo the action or watch it over and over again, thus adding an ironic dimension to the beheading drama and “lightening” the work. In this scenario, the viewer becomes a part of the piece because of the potential, theoretical ability to do and undo the beheading, which leads to the viewer’s ethical implication in the beheading as a participator. The worried expression of the artist and his seeking gaze charge the physical space where the image is installed, and the viewer is transformed into the executor because he or she are part of the space, and therefore of the activity that is taking place. In this respect, the perception of traditional floor pieces as interactive has a role, yet it goes beyond abstract viewer participation to one that carries ethical implications.

* This image was taken from Game of Thrones, or from websites created and owned by HBO, the copyright of which is held by HBO. All trademarks and registered trademarks present in the image are proprietary to HBO, the inclusion of which implies no affiliation with the Game of Thrones Wiki. The use of such images is believed to fall under the fair dealing clause of copyright law. This image is used with the permission of HBO, but on the understanding that they can request its removal at any time. 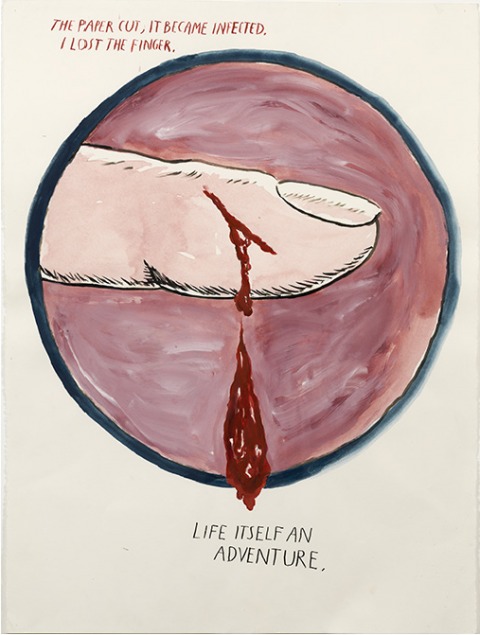 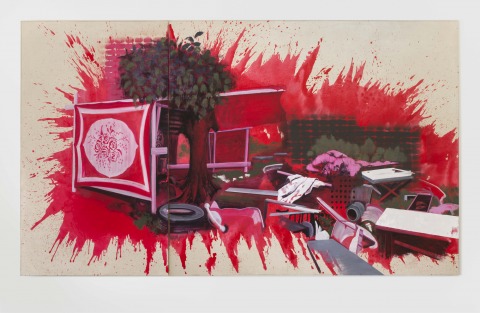